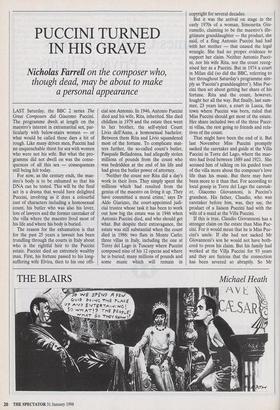 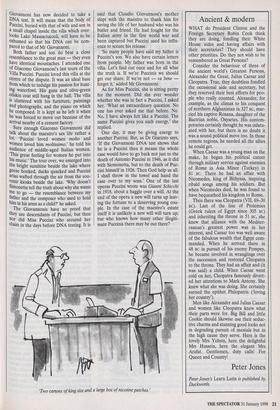 PUCCINI TURNED IN HIS GRAVE

Nicholas Farrell on the composer who,

though dead, may be about to make a personal appearance

LAST Saturday, the BBC 2 series The Great Composers did Giacomo Puccini. The programme dwelt at length on the maestro's interest in extramarital sex, par- ticularly with below-stairs women — or what would be called these days a bit of rough. Like many driven men, Puccini had an unquenchable thirst for sex with women who were not his wife. But what the pro- gramme did not dwell on was the conse- quences of all this sex — consequences still being felt today.

For now, as the century ends, the mae- stro's body is to be exhumed so that his DNA can be tested. This will be the final act in a drama that would have delighted Puccini, involving as it does a colourful cast of characters including a homosexual count, his butler who was also his lover, lots of lawyers and the former caretaker of the villa where the maestro lived most of his life and where his body is buried.

The reason for the exhumation is that for the past 25 years a lawsuit has been trundling through the courts in Italy about who is the rightful heir to the Puccini estate. Puccini died an extremely wealthy man. First, his fortune passed to his long- suffering wife Elvira, then to his one offi- cial son Antonio. In 1946, Antonio Puccini died and his wife, Rita, inherited. She died childless in 1979 and the estate then went to her brother, the self-styled Count Livio dell'Anna, a homosexual bachelor. Between them Rita and Livio squandered most of the fortune. To complicate mat- ters further, the so-called count's butler, Pasquale Belladonna, had allegedly stolen millions of pounds from the count who was bedridden at the end of his life and had given the butler power of attorney.

'Neither the count nor Rita did a day's work in their lives. They simply spent the millions which had resulted from the genius of the maestro on living it up. They have committed a moral crime,' says Dr Aldo Giarizzo, the court-appointed judi- cial trustee whose task it has been to work out how big the estate was in 1946 when Antonio Puccini died, and who should get what. But despite their extravagance, the estate was still substantial when the count died in 1986: two flats in Monte Carlo; three villas in Italy, including the one at Torre del Lago in Tuscany where Puccini composed nine of his 12 operas and where he is buried; many millions of pounds and some music which will remain in copyright for several decades.

But it was the arrival on stage in the early 1970s of a woman, Simonetta Giu- rumello, claiming to be the maestro's ille- gitimate granddaughter — the product, she said, of a fling Antonio Puccini had had with her mother — that caused the legal wrangle. She had no proper evidence to support her claim. Neither Antonio Pucci- ni, nor his wife Rita, nor the count recog- nised her as a Puccini. But in 1974 a court in Milan did (so did the BBC, referring to her throughout Saturday's programme sim- ply as 'Puccini's granddaughter'). Miss Puc- cini then set about getting her share of his fortune. Rita and the count, however, fought her all the way. But finally, last sum- mer, 23 years later, a court in Lucca, the town where Puccini was born, ruled that Miss Puccini should get most of the estate. Her share included two of the three Pucci- ni villas, the rest going to friends and rela- tives of the count.

That might have been the end of it. But last November Miss Puccini promptly sacked the caretaker and guide at the Villa Puccini in Torre del Lago, where the mae- stro had lived between 1889 and 1921. She accused him of talking on his guided tours of the villa more about the composer's love life than his music. But there may have been more to it than that. For according to local gossip in Torre del Lago the caretak- er, Giacomo Giovannoni, is Puccini's grandson. His father, Claudio, who was caretaker before him, was, they say, the product of a liaison Puccini had with the wife of a maid at the Villa Puccini.

If this is true, Claudio Giovannoni has a stronger claim on the estate than Miss Puc- cini. For it would mean that he is Miss Puc- cini's uncle. If she had not sacked Mr Giovannoni's son he would not have both- ered to press his claim. But his family had worked at the Villa Puccini for 93 years and they are furious that the connection has been severed so abruptly. So Mr Giovannoni has now decided to take a DNA test. It will mean that the body of Puccini, buried with that of wife and son in a small chapel inside the villa which over- looks Lake Massaciuccoli, will have to be exhumed so that his DNA can be com- pared to that of Mr Giovannoni.

Both father and son do bear a close resemblance to the great man — they even have identical moustaches. I attended one of Giacomo Giovannoni's last tours of the Villa Puccini. Puccini loved this villa at the centre of the dispute. It was an ideal base from which to indulge his passion for hunt- ing waterfowl. His guns and olive-green Oilskin coat still hang in the hall. The villa is cluttered with his furniture, paintings and photographs, and the piano on which he composed. It is kept as he left it when he was forced to move out because of the arrival nearby of a cement factory.

Sure enough Giacomo Giovannoni did talk about the maestro's sex life rather a lot. Puccini loved women moho and women loved him moitissimo,' he told his audience of middle-aged Italian women. This great feeling for women he put into his music.' The tour over, we emerged into the bright sunshine beside the lake where geese honked, ducks quacked and Puccini arias wafted through the air from the sou- venir kiosks beside the lake. 'Why doesn't Sunonetta tell the truth about why she wants me to go — the resemblance between my father and the composer who used to hold him in his arms as a child?' he asked.

The Giovannonis have no proof that they are descendants of Puccini, but then nor did Miss Puccini who secured her claim in the days before DNA testing. It is said that Claudio Giovannoni's mother slept with the maestro to thank him for saving the life of her husband who was his butler and friend. He had fought for the Italian army in the first world war and been captured but Puccini used his influ- ence to secure his release.

`So many people have said my father is Puccini's son. We also have certain letters from people. My father was born in the villa. Let's find out once and for all what the truth is. If we're Puccinis we should get our share. If we're not — va bene — forget it,' added Mr Giovannoni.

As for Miss Puccini, she is sitting pretty for the moment. Did she ever wonder whether she was in fact a Puccini, I asked her. 'What an extraordinary question. No one has ever asked me that before. No. No. I have always felt like a Puccini. The name Puccini gives you such energy,' she replied.

One day, it may be giving energy to another Puccini. But, as Dr Giarizzo says, 'If the Giovannoni DNA test shows that he is a Puccini then it means the whole case would have to go back not just to the death of Antonio Puccini in 1946, as it did with Siomonetta, but to the death of Puc- cini himself in 1926. Then God help us all. I shall throw in the towel and hand the case over to my sons.' One of the last operas Puccini wrote was Gianni Schicchi in 1918, about a haggle over a will. At the end of the opera a new will turns up leav- ing the fortune to a deserving young cou- ple. In the case of the maestro's estate itself it is unlikely a new will will turn up, but who knows how many other illegiti- mate Puccinis there may be out there?

Two cartons of king size and a large box of nicotine patches.'