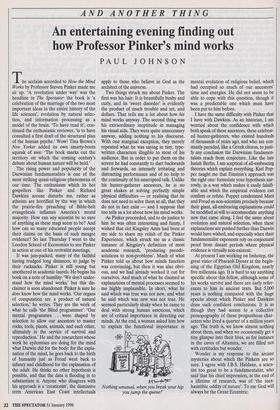 An entertaining evening finding out how Professor Pinker's mind works

, The rising power and popularity of the Darwinian fundamentalists is one of the most striking quasi-religious phenomena of our time. The enthusiasm which its hot gospellers like Pinker and Richard Dawkins arouse disturbs me, rather as atheists are horrified by the way in which the prairie-fire preaching of Bible-belt evangelicals inflames America's moral majority. How can any scientist be so sure of anything as these magi seem to be? And how can so many educated people accept their claims on the basis of such meagre evidence? So last Thursday I went to the London School of Economics to see Pinker in action at one of his revivalist meetings.

It was jam-packed, many of the faithful having trudged long distances, to judge by their rucksacks. Pinker is still young but smothered in academic laurels. He begins his book on a note of humility: 'We don't under- stand how the mind works,' but this dis- claimer is soon abandoned. Pinker is sure he does know how the mind works. 'Our organs of computation are a product of natural selection,' he writes. They are the work of what he calls 'the Blind programmer'. 'Our mental programmes . . . were shaped by selection to allow our ancestors to master rocks, tools, plants, animals, and each other, ultimately in the service of survival and reproduction.' He and the researchers whose work he epitomises are doing for the mind what Darwin did for the body: for the expla- nation of the mind, he goes back to the birth of humanity just as Freud went back to infancy and childhood for the explanation of the adult. He thinks no other hypothesis is possible, and that the data is flooding in to substantiate it. Anyone who disagrees with his approach is a 'creationist', the dismissive term American East Coast intellectuals apply to those who believe in God as the architect of the universe.

Two things struck me about Pinker. The first was his hair. It is beautifully bushy and curly, and its `sweet disorder' is evidently the product of much trouble and art, and dollars. That tells me a lot about how his mind works anyway. The second thing was his extraordinary ineptitude in managing his visual aids. They were quite unnecessary anyway, adding nothing to his discourse. With one marginal exception, they merely repeated what he was saying in tiny, type- written characters illegible to most of his audience. But in order to put them on the screen he had constantly to dart backwards and forwards, an intensely irritating and distracting performance and of no help to the continuity of his unscripted talk. Unlike his hunter-gatherer ancestors, he is no great shakes at solving perfectly simple physical difficulties — or realising that he does not need to solve them at all, that they do not in fact exist — and I suppose that too tells us a lot about how his mind works.

As Pinker proceeded, and to do justice to him he was often interesting and funny, I wished that old Kingsley Amis had been at my side to share my relish of the Pinker Experience, which struck me as a classic instance of Kingsley's definition of most academic research, 'producing pseudo- solutions to non-problems'. Much of what Pinker told us about how minds function was convincing, but then it was also obvi- ous, and we had already worked it out for ourselves. And much of what he claimed as explanations of mental processes seemed to me highly implausible. In short, what he said which was true was not new, and what he said which was new was not true. He seemed particularly shaky when he came to deal with strong human emotions, which are of critical importance in directing our minds. At the end, a woman asked him how to explain the functional importance in Nothing unusual when you break your hip you jump the queue!' mental evolution of religious belief, which had occupied so much of our ancestors' time and energies. He did not seem to be able to cope with this question, though it was a predictable one which must have been put to him before.

I have the same difficulty with Pinker that I have with Dawkins. As an historian, I am worried about the confidence with which both speak of these ancestors, these celebrat- ed hunter-gatherers, who existed hundreds of thousands of years ago, and who are con- stantly paraded, like a Greek chorus, to justi- fy any conclusion the Darwinian fundamen- talists reach from conjecture. Like the late Isaiah Berlin, I am sceptical of all-embracing theories which explain everything. Karl Pop- per taught me that Einstein's approach was the right one: formulate your hypothesis nar- rowly, in a way which makes it easily falsifi- able and which the empirical evidence can confirm or refute. Popper condemned Marx and Freud as non-scientists precisely because their giant, all-embracing explanations could be modified at will to accommodate anything new that came along. I feel the same about evolution and natural selection, when these explanations are pushed further than Darwin would have wished, and especially when their fundamentalist exponents rely on conjectural proof from distant periods where physical evidence is virtually non-existent.

At present I am working on Imhotep, the great vizier of Pharaoh Djoser at the begin- ning of the Egyptian Old Kingdom, nearly five millennia ago. It is hard to say anything specific about this fellow, although some of his works survive and there are early refer- ences to him in ancient texts. But 5,000 years is nothing compared with the huge epochs about which Pinker and Dawkins draw such confident conclusions. It is as though they had access to a collective prosopography of these prognathous char- acters who lived a quarter of a million years ago. The truth is, we know almost nothing about them, and when we occasionally get a tiny glimpse into their lives, as for instance in the caves of Altamira, we are filled not with certitudes but wonder.

Wonder is my response to the arcane mysteries about which the Pinkers are so sure. I agree with J.B.S. Haldane, a scien- tist too great to be a fundamentalist, who said that his chief impression, at the end of a lifetime of research, was of 'the inex- haustible oddity of nature'. To me God will always be the Great Eccentric.