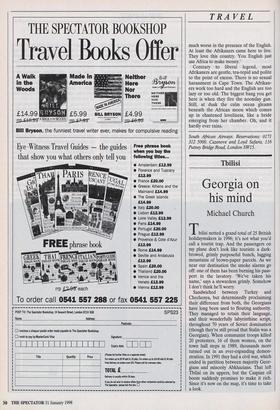 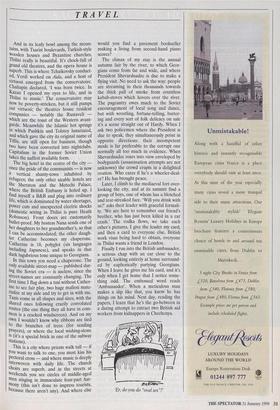 Georgia on his mind

Tbilisi netted a grand total of 25 British holidaymakers in 1996; it's not what you'd call a tourist trap. And the passengers on my plane don't look like tourists: a dark- browed, grimly purposeful bunch, lugging mountains of brown-paper parcels. As we near our destination the smoke alarms go off: one of them has been burning his pass- port in the lavatory. 'We've taken his name,' says a stewardess grimly. Somehow I don't think he'll worry.

Sandwiched between Turkey and Chechenya, but determinedly proclaiming their difference from both, the Georgians have long been used to flouting authority. They managed to retain their language, and their wonderfully labyrinthine script, throughout 70 years of Soviet domination (though they're still proud that Stalin was a Georgian). When communist troops killed 20 protesters, 16 of them women, on the town hall steps in 1989, thousands more turned out in an ever-expanding demon- stration. In 1991 they had a civil war, which ended in partition between majority Geor- gians and minority. Abkhazians. That left Tbilisi on its uppers, but the Caspian oil boom suddenly promises to make it rich. Since it's now on the map, it's time to take a look.

And in its leafy bowl among the moun- tains, with Tsarist boulevards, Turkish-style wooden houses and Byzantine churches, Tbilisi really is beautiful. It's chock-full of grand old theatres, and the opera house is superb. This is where Tchaikovsky conduct- ed, Verdi worked on Aida, and a host of virtuosi emerged from the conservatoire. Chaliapin declared, 'I was born twice. In Kazan I opened my eyes to life, and in Tbilisi to music.' The conservatoire may now be poverty-stricken, but it still pumps out virtuosi; the theatres house resident companies — notably the Rustaveli Which are the toast of the Western avant- garde. Meanwhile the Islamic hot springs in which Pushkin and Tolstoy luxuriated, and which gave the city its original name of Tiflis, are still open for business, though two have been converted into nightclubs. Capitalism in the former Soviet Union takes the naffest available form.

The big hotel in the centre of the city — once the pride of the communists — is now a vertical shanty-town inhabited by refugees; the only other sizable hotels are the Sheraton and the Metechi Palace, Where the British Embassy is holed up. I find myself a B&B and plug into ordinary life, which is dominated by water shortages, Power cuts and unexpected electric shocks (domestic wiring in Tbilisi is pure Heath Robinson). Front doors are customarily bullet-proof. My hostess Nana sends one of her daughters to her grandmother's, so that I can be accommodated; the other daugh- ter Catherine becomes my chaperone. Catherine is 18, polyglot (six languages including Japanese), and speaks in that dark lugubrious tone unique to Georgians. In this town you need a chaperone. The only available street-map — published dur- ing the Soviet era — is useless, since the street-names are constantly changing. The first time I flag down a taxi without Cather- ine to see fair play, two huge mafiosi mate- nalise at my side and try to get in with me. Taxis come in all shapes and sizes, with the shared ones following crazily convoluted routes (the one thing they all have in com- mon is a cracked windscreen). And on my ovvn I wouldn't know why ribbons are tied to the branches of trees (for sending Prayers), or where the local wishing-stone is (it's a special brick in one of the subway stations).

This is a city where priests walk tall — if You want to talk to one, you must kiss his pectoral cross — and where music is deeply interwoven with daily life. The church Choirs are superb, and in the streets at weekends you see circles of middle-aged Men singing in immaculate four-part har- mony (this isn't done to impress tourists, because there aren't any). And where else would you find a pavement bookseller making a living from second-hand piano scores?

The climax of my stay is the annual autumn fair by the river, to which Geor- gians come from far and wide, and where President Shevardnadze is due to make a flying visit. No need to ask the way: people are streaming in their thousands towards the thick pall of smoke from countless kebab-stoves which hovers over the river. The pageantry owes much to the Soviet encouragement of local song and dance, but with wrestling, fortune-telling, barter- ing and every sort of folk delicacy on sale it's a scene straight out of Hardy. When I ask two policemen where the President is due to speak, they simultaneously point in opposite directions: their incompetent mode is far preferable to the corrupt one normally all too much in evidence. When Shevardnadze roars into view enveloped by bodyguards (assassination attempts are not unknown) the crowd erupts in a delighted ovation. Who cares if he's a wheeler-deal- er? He has brought peace.

Later, I climb to the mediaeval fort over- looking the city, and at its summit find a group of boys, one of whom has a blotched and tear-streaked face. Will you drink with us?' asks their leader with graceful formali- ty. 'We are here to remember our friend's brother, who has just been killed in a car crash.' The vodka flows, we take each other's pictures, I give the leader my card, and then a card to everyone else. British work visas being hard to obtain, everyone in Tbilisi wants a friend in London.

Finally I run into the British ambassador, a serious chap with an ear close to the ground, looking entirely at home surround- ed by euphorically partying Georgians. When I leave he gives me his card, and it's only when I get home that I notice some- thing odd. The embossed word reads `Ambassasdoe. When a meticulous man makes a slip like that, you know he has things on his mind. Next day, reading the papers, I learn that he's the go-between in a daring attempt to extract two British aid workers from kidnappers in Chechenya.