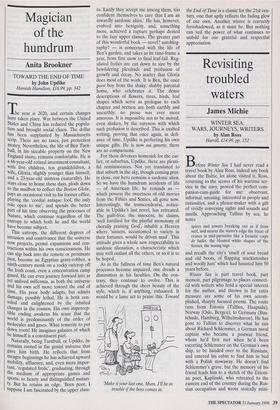 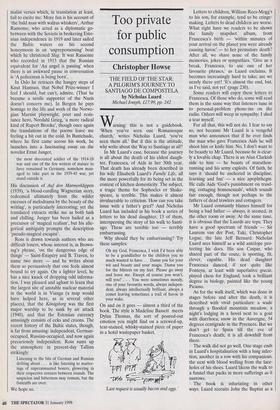 WINTER SEA: WARS, JOURNEYS, WRITERS by Alan Ross Harvill, £14.99, pp. 152 Before Winter Sea I had never read a travel book by Alan Ross, indeed any book about the Baltic, let alone visited it. Ross, returning to the scenes of his wartime ser- vice in the navy, proved the perfect com- panion-cum-guide for me: observant, informal, amusing, interested in people and curiosities, and a phrase-maker with a gift of vividly conveying sights and sounds and smells. Approaching Tallinn by sea, he notes spires and towers breaking out as if from surf, and nearer the water's edge the frieze of cranes in mid-pirouette like a frenetic corps de ballet, the bloated white shapes of the ferries, the nosing tugs ...

and recalls the city's 'smell of sour bread and old boots, of flapping mackintoshes and woolly hats' which had haunted him 50 years before.

Winter Sea is part travel book, part memoir, part pilgrimage to places connect- ed with writers who hold a special interest for the author, and thrown in for extra measure are some of his own accom- plished, sharply focused poems. The route runs from Estonia (Tallinn, Haapsalu), Norway (Oslo, Bergen), to Germany (Bux- tehude, Hamburg, Wilhelmshaven). He has gone to Tallinn to discover what he can about Richard Schlemmer, a German naval captain who became a postwar friend, whom he'd first met when he'd been escorting Schlemmer on the German's own ship, to be handed over to the Russians, and entered his cabin to find him in bed with a Polish stowaway. He doesn't find Schlemmer's grave, but the memory of his friend leads him to a sketch of the Estoni- an poet, Kaplinski, who retreated to the eastern end of the country during the Rus- sian occupation and wrote stoically mini- malist verses which, in translation at least, fail to excite me. More fun is his account of 'the bald man with walrus whiskers', Arthur Ransome, who acted as a diplomatic go- between with the Soviets in brokering Esto- nian independence in 1919 and later sailed the Baltic waters on his second honeymoon in an 'unprepossessing' boat which he christened Slug. It was Ransome who recorded in 1913 that the Russian equivalent for 'An angel is passing' when there is an awkward pause in conversation is 'A policeman is being born'.

In Oslo he retraces the hungry steps of ICnut Hamsun, that Nobel Prize-winner I feel I should, but can't, admire. (That he became a senile supporter of the Nazis doesn't concern me). In Bergen he pays homage to the life and work of the Norwe- gian Marxist playwright, poet and resis- tance hero, Nordahl Grieg, 'a more radical kind of Rupert Brooke', though once again the translations of the poems leave me feeling a bit out in the cold. In Buxtehude, where he first came across his work, he launches into a fascinating essay on the novelist Ernst Junger,

the most decorated soldier of the 1914-18 war and one of the few writers of stature to have remained in Germany, somehow man- aged to take part in the 1939-45 war, yet stand outside it.

His discussion of Auf den Martnorklippen (1939), 'a blood-curdling Wagnerian story, redeemed ultimately from the wilder excesses of melodrama by the beauty of the writing', is particularly interesting; yet the translated extracts strike me as both lush and chilling. Junger has been hailed as a precursor of 'magical realism', but his alle- gorical ambiguity prompts the description 'pseudo-magical escapist'.

Ross is drawn towards authors who are difficult loners, whose interest is, in Brown- ing's phrase, 'on the dangerous edge of things' — Saint-Exupery and B. Traven, to name two more — and he writes about them so persuasively that one feels almost bound to try again. On a lighter level, he has a nice knack of dropping odd informa- tion. I was pleased and aghast to learn that the largest site of unstable nuclear material in the world is in Vianga (a map would have helped here, as in several other places), that the Konigsbetg was the first major warship to be sunk by air attack (1940), and that the Estonian currency amusingly consists of eeks and croons. The recent history of the Baltic states, though, is far from amusing: independent, German- occupied, Russian-occupied, and now again precariously independent. Ross sums up the atmosphere in present-day Tallinn strikingly:

Listening to the bits of German and Russian drifting about .. . is like listening to mutter- ings of superannuated boxers, glowering in their respective corners between rounds. The suspicion and bitterness may remain, but the fisticuffs are over.