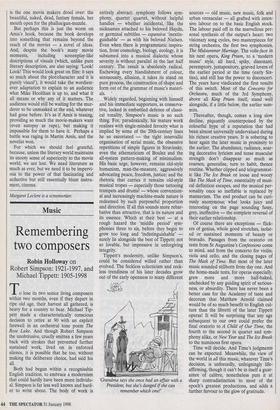 Robin Holloway on Robert Simpson: 1921-1997, and Michael Tippett: 1905-1998 To lose its two senior living composers within two months, even if they depart in ripe old age, their harvest all gathered, is heavy for a country to bear. Michael Tip- pett made a characteristically conscious decision to retire at 90 with an explicit farewell in an orchestral tone poem The Rose Lake. And though Robert Simpson the unobtrusive, cruelly smitten a few years back with strokes that prevented further sustained work, lived on in enforced silence, it is possible that he too, without making the deliberate choice, had said his all.

Both had begun within a recognisable English tradition, to embrace a modernism that could hardly have been more individu- al. Simpson is far less well known and hard- er to write about. The body of work is entirely abstract: symphony follows sym- phony, quartet quartet, without helpful handles — whether incidental, like the nicknames attached to his beloved Haydn, or germinal subtitles — espansiva 'inextin- guishable' — as with his beloved Nielsen. Even when there is programmatic inspira- tion, from cosmology, biology, ecology, it is subsumed into a musical dialectic whose severity is without parallel in the last half century. The result is absolutely radical. Eschewing every blandishment of colour, sensuousity, allusion, it takes its stand on pure process, the construction of shape and form out of the grammar of music's materi- als. '

Widely regarded, beginning with himself and his immediate supporters, as conserva- tive, locked in embattled defence of classi- cal tonality, Simpson's music is no such thing. For, paradoxically, his mature work realises with single-minded ferocity what is implied by some of the 20th-century lines he so excoriated — the tight intervallic organisation of serial music, the obsessive repetitions of simple figures in Stravinsky, even the athematicism of Boulez and the all-system pattern-making of minimalism. His basic urge, however, remains old-style humanism, man-the-measure, aggressively advocating peace, freedom, justice; and the rhetoric that carries it remains old-style musical tropes — especially those tattooing trumpets and drums! — whose convention- al and increasingly machine-made nature is redeemed by such purposeful proportion and direction. If all this sounds more rebar- bative than attractive, that is its nature and its essence. Which at their best — at a rough hazard the 'middle period' sym- phonies three to six, before they begin to grow too long and 'indistinguishable' — surely lie alongside the best of Tippett; not so lovable, but impressive in unforgiving integrity.

Tippett's modernity, unlike Simpson's, could be considered willed rather than evolved. The feckless eclecticism and reck- less trendiness of his later decades grow out of the early openness to many different 'Grandma says she once had an affair with a President, but she's danged if she can remember which one!'

sources — old music, new music, folk and urban vernacular — all grafted with inten- sive labour on to the basic English stock. The labour paid off in the marvellous per- sonal synthesis of the output's heart: two visionary song cycles, two masterpieces for string orchestra, the first two symphonies, The Midsummer Marriage. The volte-face in his next opera, King Priam, to a `modern music' style, all hard, spiky, dissonant, peremptory, juxtapository, grieved lovers of the earlier period at the time (early Six- ties), and still has the power to disconcert. The years have vindicated the first results of this switch. Most of the Concerto for Orchestra, much of the 3rd Symphony, above all King Priam itself, stand well alongside, if a little below, the earlier sum- mits.

Thereafter, though, comes a long slow decline, piquantly counterpoised by the colourful hype of a reputation that had been almost universally undervalued during his richest creative years. It is sobering to hear again the later music in proximity to the earlier. The abundance, radiance, soar- ing decorative lyricism and tense muscular strength don't disappear so much as coarsen, generalise, turn to habit, thence routine. Whether clipped and telegrammat- ic like The Ice Break or loose and woozy like The Mask of Time, essentiality of musi- cal definition escapes, and the musical per- sonality once so ineffable is replaced by mannerism. The end product can be curi- ously anonymous; what looks juicy and interesting on the page sounding fussy, grey, ineffective — the complete reversal of their earlier relationship.

Of course there are exceptions — flick- ers of genius, whole good stretches, isolat- ed or sustained moments of beauty or bravado. Passages from the oratorio on texts from St Augustine's Confessions come to mind, and from the concerto for violin, viola and cello, and the closing pages of The Mask of Time. But most of the later music sounded stillborn from day one. And the home-made texts, for operas especially, grew more and more half-baked, unchecked by any guiding spirit of serious- ness, or absurdity. There has never been a better case for the Academy of taste and decorum that Matthew Arnold claimed would be of so much benefit to English cul- ture than the libretti of the later Tippett operas! It will be surprising that any age subsequent to our own could prefer the final oratorio to A Child of Our Time, the fourth to the second in quartet and sym- phony alike, or New Year and The Ice Break to the numinous first opera.

Time will decide. And Time's judgments can be expected. Meanwhile, the view of the world in all this music, whatever Time's decision, is unforcedly, unfeigningly life- affirming, though it can't be in itself a guar- antee of calibre, nonetheless puts it at sharp contradistinction to most of the epoch's greatest productions, and adds a further fervour to the glow of gratitude.