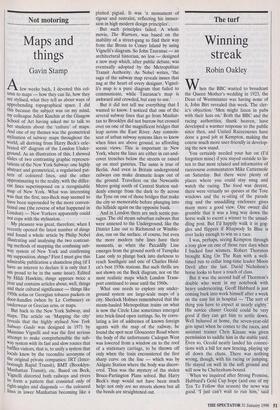 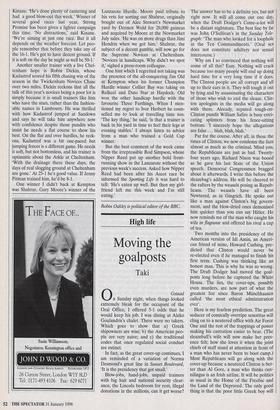 When the BBC wanted to broadcast the Queen Mother's wedding in 1923, the Dean of Westminster was having none of it, John Birt revealed this week. The cler- ic's objection: 'Men might listen in pubs with their hats on.' Both the BBC and the racing authorities, thank heaven, have developed a wanner response to the public since then, and United Racecourses have done a good job at Kempton, making the course much more user-friendly in develop- ing the new stand.

You certainly needed your hat on (I'd forgotten mine) if you stayed outside to lis- ten to that most relaxed and informative of racecourse commentators Mike Cattermole on Saturday. But there were plenty of places where you could stay snug and watch the racing. The food was decent, there were virtually no queues at the Tote windows and the re-siting of the parade ring and the unsaddling enclosure gives many more a good view. One owner did grumble that it was a long way down the horse walk to escort a winner to the unsad- dling post. But I'd happily walk it in gog- gles and flippers if Rhapsody In Blue is ever lucky enough to win us a race.

I was, perhaps, seeing Kempton through a rosy glow on one of those rare days when I backed four winners. Robert Thornton brought King On The Run with a well- timed run to collar long-time leader Moon Devil after the last. David Nicholson's horse looks to have a touch of class.

But it was the second half of Thornton's double who went in my notebook with heavy underscoring. Geoff Hubbard is just coming back into work himself after a week on the easy list in hospital — 'The sort of thing you have to expect at nearly eighty.' His novice chaser Occold could be very good if they can get him to settle down. Well behaved at home, the seven-year-old gets upset when he comes to the races, and assistant trainer Chris ICinane was given permission to saddle him in the stable yard. Even so, Occold nearly landed his connec- tions with a bill for new fencing, playing up all down the chute. There was nothing wrong, though, with his racing or jumping. He stayed on well in the soft ground and will now be Cheltenham-bound.

When we inquired after Strong Promise, Hubbard's Gold Cup hope (and one of my Ten To Follow this season) the news was good. 'I just can't wait to run him,' said ICinane. 'He's done plenty of cantering and had a good blow-out this week.' Winner of several good races last year, Strong Promise has been given a lighter campaign this time. `No distractions,' said Kinane. 'We're aiming at just one race. But it all depends on the weather forecast. Let peo- ple remember that before they take any of the 16-1. He's got to have decent ground. If it is soft on the day he might as well be 50-1.'

Another smaller trainer with a live Chel- tenham hope is Robin Dickin, whose Kadastrof scored his fifth chasing win of the season in the Twickenham Novices Chase over two miles. Dickin reckons that all the talk of this year's novices being a poor lot is simply because it is small trainers like him who have the stars, rather than the fashion- able names in Lambourn. He was thrilled with how Kadastrof jumped at Sandown and says he will take him anywhere now with confidence despite those pundits who insist he needs a flat course to show his best. On the flat and over hurdles, he reck- ons, Kadastrof was a bit one-paced but jumping fences is a different game. He needs it soft, but not bottomless, and his trainer is optimistic about the Arkle at Cheltenham. 'With the drainage there these days, the days of real slogging ground at Cheltenham are gone.' At 25-1 he's good value. If Jenny Pitman trained him, he'd be 8-1.

One winner I didn't back at Kempton was Shahrur, Gary Moore's winner of the Lanzarote Hurdle. Moore paid tribute to his vets for sorting out Shahrur, originally bought out of Alec Stewart's Newmarket yard by Dermot Weld for 20,000 guineas and acquired by Moore at the Newmarket July sales. 'He was on more drugs than Jimi Hendrix when we got him.' Shahrur, the subject of a decent gamble, will now go for the Supreme Novices at Cheltenham. 'Novices in handicaps. Why didn't we spot it,' sighed a press-room colleague.

One hint which I regretted not taking was the presence of the all-conquering Jim Old at Kempton when his former Champion Hurdle winner Collier Bay was taking on Relkeel and Dato Star at Haydock. Old won the other handicap hurdle with the favourite Three Farthings. When I men- tioned my regret to Ivor Herbert he coun- selled me to look at travelling time too. 'The key thing,' he said, 'is that a trainer is back in his yard in time to feel their legs at evening stables.' I always listen to advice from a man who trained a Gold Cup winner.

But the best comment of the week came from the irrepressible Rod Simpson, whose Nipper Reed put up another bold front- running show in the Lanzarote without the previous week's success. Asked how Nipper Reed had been after his Ascot race he informed the Sporting Life it was hard to tell: 'He's eaten up well. But then my girl- friend left me this week and I'm still eating.'