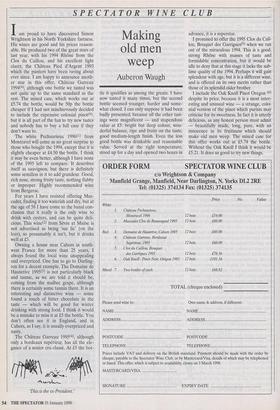 Iam proud to have discovered Simon Wrightson in his North Yorkshire fastness. His wines are good and his prices reason- able. He produced two of the great stars of last year, with his 1994 Rhone from the Clos du Caillou, and his excellent light claret, the Château Pied d'Argent 1993 which the punters have been raving about ever since. I am happy to announce anoth- er star in this offer, Château Garreau 1994e0, although one bottle we tasted was not quite up to the same standard as the rest. The mixed case, which works out at 1,5.74 the bottle, would be 50p the bottle cheaper if I had not mischievously decided to include the expensive colonial pinot(6), but it is all part of the fun to try new tastes and nobody has to buy a full case if they don't want to.

The white Pechaurieux 1996(1) from Montravel will come as no great surprise to those who bought the 1994, except that it is slightly cheaper at £4.50 the bottle. I think it may be even better, although I have none of the 1995 left to compare. It describes itself as sauvignon, but there is definitely some semillon in it to add grandeur. Good, rich nose, strong fruity taste, nothing flabby or improper. Highly recommended wine from Bergerac.

For years I have resisted offering Mus- cadet, finding it too waterish and dry, but at the age of 58 I have come to the banal con- clusion that it really is the only wine to drink with oysters, and can be quite deli- cious. This wine(2) from Sevre et Maine is not advertised as being `sur lie' (on the lees), so presumably it isn't, but it drinks well at £5.

Owning a house near Cahors in south- west France for more than 25 years, I always found the local wine unappealing and overpriced. One has to go to Darling- ton for a decent example. The Domaine de Hauterive 1995(s) is not particularly black and tannic, as we are told it should be, coming from the malbec grape, although there is certainly some tannin there. It is an interesting and distinctive wine — some found a touch of bitter chocolate in the taste — which will be good for winter drinking with strong food. I think it would be a mistake to miss it at £5 the bottle. You don't often see it in England, and in Cahors, as I say, it is usually overpriced and nasty.

The Chateau Garreau 1995M, although only a bordeaux superieur, has all the ele- gance of a senior cru classe. At £5 the bot- 'This is the ex-President.' tle it qualifies as among the greats. I have now tasted it many times, but the second bottle seemed younger, harder and some- what closed. I can only suppose it had been badly presented, because all the other tast- ings were magnificent — and stupendous value at £5: bright but deep colour, won- derful balance, ripe and fruity on the taste, good medium-length finish. Even the less good bottle was drinkable and reasonable value. Served at the right temperature, stood up for a day and opened two hours in advance, it is a superstar.

I promised to offer the 1995 Clos du Cail- lou, Bouquet des Garrigues(5) when we ran out of the miraculous 1994. This is a good, strong Rhone with masses of taste and formidable concentration, but it would be idle to deny that at this stage it lacks the sub- lime quality of the 1994. Perhaps it will gain splendour with age, but it is a different wine, and is offered on its own merits rather than those of its splendid older brother. I include the Oak Knoll Pinot Oregon (6) despite its price, because it is a most inter- esting and unusual wine — a strange, colo- nial version of the pinot which purists may criticise for its sweetness, In fact it is utterly delicious, as any honest person must admit — beautifully made, long, pure, with an innocence in its fruitiness which should make old men weep. The mixed case for this offer works out at £5.74 the bottle. Without the Oak Knoll I think it would be £5.21. It does us good to try new things.