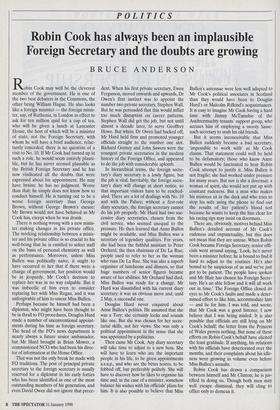 Robin Cook may well be the cleverest member of the government. He is one of the two best debaters in the Commons, the other being William Hague. He also looks like a foreign minister — the foreign minis- ter, say, of Ruthenia, in London in effect to ask for ten million quid for a cup of tea, who will be given a lunch at Lancaster House, the host of which will be a minister of state, not the Foreign Secretary, with whom he will have a brief audience, reluc- tantly conceded; there is no question of a visit to No. 10. If Mr Cook had turned up in such a role, he would seem entirely plausi- ble, but he has never seemed plausible as the British Foreign Secretary and he has now vindicated all the doubts that were expressed about his appointment. He may have brains: he has no judgment. Worse than that; he simply does not know how to conduct himself. He is turning out to be a worse foreign secretary than George Brown, without George Brown's excuse: Mr Brown would not have behaved as Mr Cook has, except when he was drunk.

There is nothing wrong with a new minis- ter making changes in his private office. The working relationship between a minis- ter and his private office is so crucial to his well-being that he is entitled to select staff on the basis of personal chemistry as well as performance. Moreover, unless Miss Bullen was politically naive, it ought to have occurred to her that if there were a change of government, her position would be in jeopardy. Mr Cook's decision to replace her was in no way culpable. But it was imbecilic of him even to consider replacing her with Miss Regan, and it was unforgivable of him to smear Miss Bullen.

Perhaps because he himself had been a diplomat, who might have been thought to be in thrall to FO procedures, Douglas Hurd made a number of unconventional appoint- ments during his time as foreign secretary. The head of the FO's news department is nearly always a future senior ambassador, but Mr Hurd brought in Brian Mower, a commissioned NCO who had been his direc- tor of information at the Home Office.

That was not the only break he made with FO traditions. The post of principal private secretary to the foreign secretary is usually reserved for a diplomat in his early forties who has been identified as one of the most outstanding members of his generation, and even David Owen did not ignore that prece- dent. When his first private secretary, Ewen Fergusson, moved onwards and upwards, Dr Owen's first instinct was to appoint the number two private secretary, Stephen Wall. But he was persuaded that this would inflict too much disruption on career patterns. Stephen Wall did get the job, but not until almost a decade later, to serve Geoffrey Howe. But where Dr Owen had backed off, Mr Hurd held firm and promoted younger officials straight to the number one slot. Richard Gozney and John Sawers were the youngest private secretaries in the modern history of the Foreign Office, and appeared to do the job with considerable aplomb.

In hierarchical terms, the foreign secre- tary's diary secretary is a lowly figure, but the job is vital. Inevitably, the foreign secre- tary's diary will change at short notice, so that important visitors have to be resched- uled. There are a lot of dealings with No. 10 and with the Palace; without a first-rate diary secretary, the foreign secretary cannot do his job properly. Mr Hurd had two suc- cessive diary secretaries, chosen from the civil service, who seemed unequal to the pressure. He then learned that Anne Millen might be available, and Miss Bullen was a secretary of legendary qualities. For years, she had been the faithful assistant to Peter Orchard, the then chairman of De La Rue; people used to refer to her as the woman who runs De La Rue. She was also a superb organiser of luncheons and dinners, so that huge numbers of senior figures became aware of her abilities. Mr Orchard had died, Miss Bullen was ready for a change, Mr Hurd was dissatisfied with his current diary secretary; it was an obvious move and, until 2 May, a successful one.

Douglas Hurd never enquired about Anne Bullen's politics. He assumed that she was a Tory: she certainly looks and sounds like one. But she was chosen for her secre- tarial skills, not her views. She was only a political appointment in the sense that she was appointed by a politician.

Then came Mr Cook. Any diary secretary will take time to adjust to a new boss. She will have to learn who are the important people in his life, to be given appointments a.s.a.p., and who are the bates noires, to be fobbed off, but preferably politely. She will have to discover how he likes to organise his time and, in the ease of a minister, somehow balance his wishes with his officials' plans for him. It is also possible to believe that Miss Bullen's antennae were less well adapted to Mr Cook's political associates in Scotland than they would have been to Douglas Hurd's or Malcolm Rifkind's acquaintances. It is easy to imagine Mr Cook having a hard time with Jimmy McTumshie of the Auchtermuchty tenants' support group, who accuses him of employing a snooty Sasse- nach secretary to snub his old friends.

But it seems inconceivable that Miss Bullen suddenly became a bad secretary, 'impossible to work with' as Mr Cook claims. That statement could well be held to be defamatory; those who know Anne Bullen would be fascinated to hear Robin Cook attempt to justify it. Miss Bullen is not fragile; she had worked under pressure for many years. But nor is she a doormat; a woman of spirit, she would not put up with constant rudeness. But a man who makes his mistress sit in the dark and who tries to stop his wife using the phone to find out the results of her patient's blood test because he wants to keep the line clear for his racing tips may insist on doormats.

There are, obviously, motives behind Miss Bullen's detailed account of Mr Cook's rudeness and unpunctuality, but this does not mean that they are untrue. When Robin Cook became Foreign Secretary, senior offi- cials went around saying, 'Look, he's never been a minister before; he is bound to find it hard to adjust to the routines. He's also bound to be suspicious of us and we've just got to be patient. The people have spoken and Mr Blair has chosen his Foreign Secre- tary. He's an able fellow and it will all work out in time.' The Foreign Office closed its eyes to Mr Cook's faults and made a deter- mined effort to like him, accommodate him — and lie for him. I was told, and wrote, that Mr Cook was a good listener; I now believe that I was being misled. It is also possible that officials are still lying on Mr Cook's behalf; the letter from the Princess of Wales proves nothing. But none of these efforts on Robin Cook's behalf have elicited the least gratitude. If anything, his relations with his officials have deteriorated over the months, and their complaints about his idle- ness were growing in volume even before Miss Bullen's assaults.

Robin Cook has drawn a comparison between himself and Mr Clinton; he is jus- tified in doing so. Though both men may well escape dismissal, they will cling to office only to demean it.