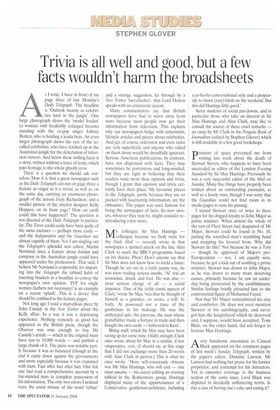 Page 10, 31 January 2004 — Trivia is all well and good, but a few facts wouldn't harm the broadsheets
Close

Trivia is all well and good, but a few facts wouldn't harm the broadsheets

As I write. I have in front of me page three of last Monday's Daily Telegraph. The headline is 'Outlook steamy as celebrities land in the jungle'. One large photograph shows the 'model Jordan' a woman with freakishly enlarged breasts) standing with the ex-pop singer Johnny Rotten, who is holding a koala bear. An even larger photograph shows the rest of the socalled celebrities, who have fetched up in the Australian jungle for the delectation of television viewers. And below these smiling faces is a story, written without a trace of irony, which pays homage to the whole ghastly crew. There is a question we should ask ourselves. How it is that a great newspaper such as the Daily Telegraph can run on page three a feature as vulgar as it is trivial, as well as, on the same day, carrying an enormous photograph of the actress Jody Richardson, and a smaller picture of the interior designer Kelly Hoppen, on its front page? How on earth could this have happened? The question is not directed at the Daily Telegraph in particular. The Times could easily have been guilty of the same excesses — perhaps more easily — and the Independent and the Guardian are almost capable of them. Nor I am singling out the Telegraph's splendid new editor, Martin Newland, since a feature about Jordan and company in the Australian jungle could have appeared under his predecessor. That said, I believe Mr Newland is responsible for importing into the Telegraph the tabloid habit of inserting brackets in a headline to convey the newspaper's own opinion. `IVF for single women (fathers not necessary)' is an example on a recent 'splash'. This is a device that should be confined to the feature pages. Not long ago I read a marvellous piece by John Cassidy in the New Yorker about the Kelly affair. In a way it was a depressing experience. Nothing remotely as good has appeared in the British press, though the Observer was wise enough to buy Mr Cassidy's article — which in the original must have run to 10,000 words — and publish a large chunk of it. The piece was notable partly because it was so balanced (though in the end it came down against the government) and more especially because it was crammed with facts. Fact after fact after fact. One felt one had read a comprehensive account by a fair-minded man in complete possession of his information. The only two errors I noticed were the usual misuse of the word 'refute' and a strange suggestion, let through by a New Yorker 'fact-checker', that Lord Hutton speaks with an aristocratic accent. Many commentators say that British newspapers have had to move away from news because most people now get their information from television. This explains why our newspapers bulge with columnists, lifestyle articles and pieces about celebrities. And yet, of course, television and even radio are very superficial, and anyone who relied on them alone would be dreadfully ignorant. Serious American publications, by contrast, have not dispensed with facts. They may sometimes be portentous and long-winded, but they are right in believing that their readers want more than opinion and trivia, though I grant that opinion and trivia certainly have their place. My favourite pieces in the Telegraph, partly because they are so packed with fascinating information, are the obituaries. The paper was once famous for being the newspaper of facts. Its new owners, whoever they may be, might consider reintroducing a few more.

y colleague Sir Max Hastings — colleague because we both write for the Daily Mail — recently wrote in that newspaper a spirited attack on the late Alan Clark to mark the BBC4 programme based on his diaries. Phew! Don't anyone say that Sir Max does not know how to wield a lance. Though he set out in a fairly jaunty way, he was soon trading serious insults. 'Al' was an iconoclast, drunk and fool. He was also — most serious charge of all — a social impostor. 'One of the richly comic aspects of Clark,' wrote Sir Max, 'was that he thought of himself as a grandee, an aristo, a toff. In truth, Al possessed not a trace of the gentleman in his makeup. He was the archetypal spiv, the parvenu, the man whose grandfather made a fortune in trade and then bought his own castle — Saltwood in Kent'. Biting stuff, which Sir Max may have been saving up for some time. Oddly enough, Clark once wrote about Sir Max in a similar, if less vituperative, vein. (I should say at this stage that I did not exchange more than 20 words with Alan Clark in person.) This is what he once wrote. 'More self-consciously obscure was Mr Max Hastings, who will end — one must assume — his career editing an evening tabloid in the Rothermere group. Hastings displayed many of the appurtenances of a Conservative gentleman-politician, including a yo-ho-ho conversational style and a propensity to shoot (easy) birds on the weekend. But this did Hastings little good.' Keen students of social put-downs, and in particular those who take an interest in Sir Max Hastings and Alan Clark, may like to consult the source of these cruel remarks — an essay by Mr Clark in the Penguin Book of Journalism (edited by Stephen Glover) which is still available in a few good bookshops.

pressure of space prevented me from 1. writing last week about the death of Stewart Steven, who happens to have been succeeded as editor of the London Evening Standard by Sir Max Hastings. Previously he was a very successful editor of the Mail on Sunday. Many fine things have properly been written about an outstanding journalist, as well as a lovely man, though I was sorry that the Guardian could not find room in its media pages to note his passing. I teased Stewart once or twice in these pages for his dogged loyalty to John Major as prime minister. When almost the whole of the rest of Fleet Street had despaired of Mr Major, Stewart could be found in No. 10, patting the wretched man's trembling hand and mopping his fevered brow. Why did Stewart do this? Not because he was a Tory — though he approved of Major's proEuropeanism — nor, I am equally sure, because he got a kick out of soothing a prime minister. Stewart was drawn to John Major, as he was drawn to many more deserving causes, primarily because he saw an underdog being persecuted by the establishment. Similar feelings briefly attracted him to the controversial figure of Mohamed Fayed. Not that Mr Major remembered his stay and comforter. He does not even mention Stewart in his autobiography, and never got him the knighthood which he deserved and, I suppose, would have accepted. Tony Blair, on the other hand, did not forget to honour Max Hastings.

Avery handsome encomium to Conrad Black appeared on the comment pages of last week's Sunday Telegraph, written by the paper's editor, Dominic Lawson. Mr Lawson had nothing but praise for his former proprietor, and contempt for his detractors. Yet in extensive coverage in the business section of the same issue, Lord Black was depicted in decidedly unflattering terms, Is this a case of having one's cake and eating it?