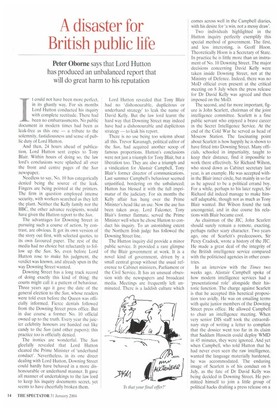 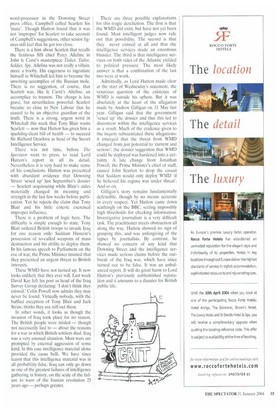 A disaster for British public life

—1t could not have been more perfect, in its ghastly way. For six months Lord Hutton conducted his inquiry with complete rectitude. There had been no embarrassments. No public document in modern times had been as leak-free as this one — a tribute to the solemnity, fastidiousness and sense of public duty of Lord Hutton.

And then, 24 hours ahead of publication, Lord Hutton sent copies to Tony Blair. Within hours of doing so, the law lord's conclusions were splashed all over the front and centre pages of the Sun newspaper.

Needless to say, No. 10 has categorically denied being the source of the leak. Fingers are being pointed at the printers. The firm in question employed intense security, with workers searched as they left the plant. Neither the Kelly family nor the BBC, the other advance recipients, would have given the Hutton report to the Sun.

The advantages for Downing Street in pursuing such a course of action, by contrast, are obvious. It got its own version of the story out first, with selected quotes, to its own favoured paper. The rest of the media had no choice but reluctantly to follow up the Sun. So, even before Lord Hutton rose to make his judgment, the verdict was known, and already spun in the way Downing Street wanted.

Downing Street has a long track record of doing exactly this kind of thing; the courts might call it a pattern of behaviour. Three years ago it gave the date of the general election to the Sun, whose readers were told even before the Queen was officially informed. Fierce denials followed from the Downing Street press office. But in due course a former No. 10 official owned up to the truth. Every year the juicier celebrity honours are handed out like candy to the Sun (and other papers); this practice too is officially denied.

The ironies are wonderful. The Sun gleefully revealed that Lord Hutton cleared the Prime Minister of 'underhand conduct'. Nevertheless, in its one direct dealing with Lord Hutton, Downing Street could hardly have behaved in a more dishonourable or underhand manner. It gave all manner of undertakings to the law lord to keep his inquiry documents secret, yet seems to have cheerfully broken them.

Lord Hutton revealed that Tony Blair had no 'dishonourable, duplicitous or underhand strategy' to leak the name of David Kelly. But the law lord learnt the hard way that Downing Street may indeed have had a dishonourable and duplicitous strategy — to leak his report.

There is no use being too solemn about all this. Trevor Kavanagh, political editor of the Sun, had acquired another scoop of famous proportions. Hutton's conclusions were not just a triumph for Tony Blair, but a liberation too. They are also a triumph and a vindication for Alastair Campbell, Tony Blair's former director of communications. Last summer Campbell's behaviour seemed unjustified, bordering on the unbalanced; Hutton has blessed it with the full imprimatur of the judiciary. For six months the Kelly affair has hung over the Prime Minister's head like an axe. Now the axe has been taken away. Lord Falconer, Tony Blair's former flatmate, served the Prime Minister well when he chose Hutton to conduct his inquiry. To an astonishing extent the Northern Irish judge has followed the Downing Street line.

The Hutton inquiry did provide a minor public service. It provided a rare glimpse of the Blair government at work. It is a novel kind of government, driven by a small central group without the usual reference to Cabinet ministers, Parliament or the Civil Service. It has an unusual obsession with the newspapers and broadcast media. Meetings are frequently left unminuted. There is a laddish culture which comes across well in the Campbell diaries, with his desire for 'a win, not a messy draw'.

Two individuals highlighted in the Hutton inquiry perfectly exemplify this special method of government. The first, and less interesting, is Geoff Hoon. Theoretically Hoon is a Secretary of State. In practice he is little more than an instrument of No. 10 Downing Street. The major decisions concerning David Kelly were taken inside Downing Street, not at the Ministry of Defence. Indeed, there was no MoD official even present at the critical meeting on 8 July when the press release for Dr David Kelly was agreed and then imposed on the MoD.

The second, and far more important, figure is John Scarlett, chairman of the joint intelligence committee. Scarlett is a fine public servant who enjoyed a brave career in the Secret Intelligence Service. At the end of the Cold War he served as head of Moscow Station. The fascinating point about Scarlett is how happily he is shown to have fitted into Downing Street. Many officials, schooled in impartiality, taught to keep their distance, find it impossible to work there effectively. Sir Richard Wilson, who stood down as Cabinet secretary last year, is an example. He was accepted within the Blair inner circle, but mainly in so far as he agreed to be a political errand boy. For a while, perhaps to his later regret, Sir Richard did indeed manage to make himself adaptable, though not as much as Tony Blair wanted. But Wilson found the task uncongenial, and M due course his relations with Blair became cool.

As chairman of the JIC, John Scarlett should surely remain a remote, exacting, perhaps rather scary character. Two years ago, one of Scarlett's predecessors, Sir Percy Cradock, wrote a history of the JIC. He made a great deal of the integrity of the British intelligence service compared with the politicised agencies in other countries.

In an interview with the Times two weeks ago, Alastair Campbell spoke of how modern intelligence services had a 'presentational role' alongside their historic function. The charge against Scarlett is that he accepted this heretical proposition too avidly. He was on emailing terms with quite junior members of the Downing Street press office. He allowed Campbell to chair an intelligence meeting. When very senior DIS staff took the extraordinary step of writing a letter to complain that the dossier went too far in its claim that Saddam Hussein could deploy WMD in 45 minutes, they were ignored. And yet when Campbell, who told Hutton that he had never even seen the raw intelligence, wanted the language materially hardened, he was accommodated. The enduring image of Scarlett is of his conduct on 8 July, as the fate of Dr David Kelly was being decided in Downing Street. He permitted himself to join a little group of political hacks drafting a press release on a

word-processor in the Downing Street press office, Campbell called Scarlett his 'mate'. Though Hutton found that it was not 'improper' for Scarlett to take account of Campbell's suggestions, other senior figures still feel that he got too close.

There is a hint about Scarlett that recalls the fictitious SIS chief Percy Alleline in John le Carres masterpiece Tinker, Tailor, Soldier. Spy. Alleline was not really a villain, more a booby. His eagerness to ingratiate himself in Whitehall led him to become the unwitting accomplice of the Russian mole. There is no suggestion, of course, that Scarlett was, like le Cane's Alleline, an accomplice to treason. The charge is less grave, but nevertheless powerful: Scarlett became so close to New Labour that he ceased to be an objective guardian of the truth. There is a strong, urgent word in Whitehall this week that Tony Blair wants Scarlett — now that Hutton has given him a sparkling-clean bill of health — to succeed Sir Richard Dearlove as head of the Secret Intelligence Service.

There was not time, before The Spectator went to press, to read Lord Hutton's report in all its detail. Nevertheless it is very hard to make sense of his conclusions. Hutton was presented with abundant evidence that Downing Street 'sexed up' last September's dossier — Scarlett acquiescing while Blair's aides materially changed its meaning and strength in the last few weeks before publication. Yet he rejects the claim that Tony Blair and his little coterie exercised improper influence.

There is a problem of logic here. The difficulty is simple enough to state. Tony Blair ordered British troops to invade Iraq for one reason only: Saddam Hussein's possession of so-called weapons of mass destruction and his ability to deploy them. In his famous speech to Parliament on the eve of war, the Prime Minister insisted that they presented an urgent threat to British interests.

These WMD have not turned up. It now looks unlikely that they ever will. Last week David Kay left his post as head of the Iraq Survey Group declaring: 'I don't think they existed.' Colin Powell now admits they may never be found. Virtually nobody, with the baffled exception of Tony Blair and Jack Straw, thinks they are still out there.

In other words, it looks as though the invasion of Iraq took place for no reason. The British people were misled — though not necessarily lied to — about the reasons for a war in which British soldiers died. Iraq was a very unusual situation. Most wars are prompted by external aggression of some kind. In this case intelligence material alone provided the casus belli. We have since learnt that this intelligence material was in all probability false. Iraq can only go down as one of the greatest failures of intelligence gathering in history, on the scale of the failure to warn of the Iranian revolution 25 years ago — perhaps greater. There are three possible explanations for this tragic dereliction. The first is that the WMD did exist, but have not yet been found. Most intelligent judges now rule Out that possibility. The second is that they never existed at all and that the intelligence services made an enormous blunder. The third is that intelligence services on both sides of the Atlantic yielded to political pressure. The most likely answer is that a combination of the last two were at work.

Admittedly, as Lord Hutton made clear at the start of Wednesday's statement, the vexatious question of the existence of WMD is outside his sphere. But it was absolutely at the heart of the allegation made by Andrew Gilligan on 31 May last year. Gilligan said that the government 'sexed up' the dossier and that this led to discontent within the intelligence services as a result. Much of the evidence given to the inquiry substantiated these allegations: it emerged that the threat from WMD changed from just potential to 'current and serious': the dossier suggestion that WMD could be deployed was hardened into a certainty. A late change from Jonathan Powell, the Prime Minister's chief of staff, caused John Scarlett to drop the caveat that Saddam would only deploy WMD 'if he believed his regime was under threat'. And so on.

Gilligan's story remains fundamentally defensible, though by no means accurate in every respect. Yet Hutton came down scathingly on the BBC, setting impossibly high thresholds for checking information. Investigative journalism is a very difficult task. The practitioner meets obstruction all along the way. Hutton showed no sign of grasping this, and was unforgiving of the lapses by journalists. By contrast, he showed no concern of any kind that Downing Street and the intelligence services made serious claims before the outbreak of the Iraq war, which have since turned out to be false. It was an unbalanced report. It will do great harm to Lord Hutton's previously unblemished reputation and it amounts to a disaster for British public life.