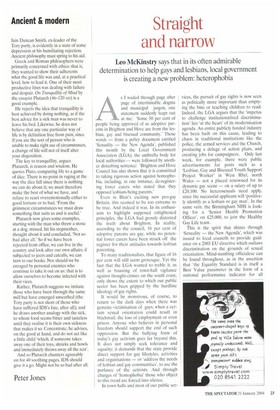 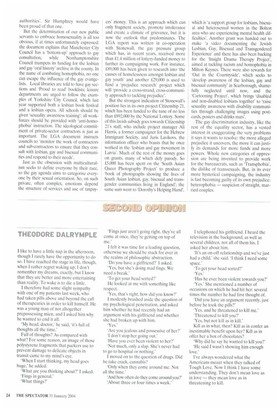 Leo McKinstry says that in its often admirable determination to help gays and lesbians, local goverment is creating a new problem: heterophobia

As I waded through page after page of interminable dogma and municipal jargon, one statement suddenly leapt out at me: 'Some 50 per cent of people being approved of as adoptive parents in Brighton and Hove are from the lesbian, gay and bisexual community.' Those words — from a policy document entitled 'Sexuality — the New Agenda', published this month by the Local Government Association (LGA), the umbrella body for local authorities — were followed by another disturbing sentence: 'Brighton and Hove Council has also shown that it is committed to taking rigorous action against homophobia, including, in one instance, de-registering foster carers who stated that they opposed lesbians being parents.'

Even in Blair's exciting new pro-gay Britain, this seemed to be too extreme to be true. And indeed it was. In its enthusiasm to highlight supposed enlightened principles. the LGA had grossly distorted the truth about Brighton. In reality, according to the council. 16 per cent of adoptive parents are gay, while no potential foster carers have been struck off the register for their attitudes towards lesbian parenting.

To many traditionalists, that figure of 16 per cent will still seem grotesque. Yet the fact that the LGA wanted to treble it, as well as boasting of town-hall vigilance against thought-crimes on the south coast, only shows the extent to which our public sector has been gripped by the hardline ideology of gay rights.

It would be monstrous, of course, to return to the dark days when there was genuine victimisation of gays, when a certain sexual orientation could result in blackmail, the loss of employment or even prison. Anyone who believes in personal freedom should support the end of such oppression. But the bullying form of today's gay activism goes far beyond this. It does not simply seek tolerance and equality: it demands that the state provide direct support for gay lifestyles, activities and organisations — or 'address the needs of lesbian and gay communities', to use the parlance of the activists. And through charges of 'homophobia' those who object to this trend arc forced into silence.

In town halls and most of our public ser vices, the pursuit of gay rights is now seen as politically more important than emptying the bins or teaching children to read. Indeed, the LGA argues that the 'impetus to challenge institutionalised discrimination' lies 'at the heart' of its modernisation agenda. An entire publicly funded industry has been built on this cause, leading to chaos in traditional institutions like the police, the armed services and the Church, producing a deluge of action plans, and creating jobs for campaigners. Only last week, for example, there were public advertisements for posts such as a 'Lesbian, Gay and Bisexual Youth Support Project Worker' in West Rhyl, north Wales — not a placed renowned for its dynamic gay scene — on a salary of up to £20,100. No heterosexuals need apply, since the successful applicant will 'positively identify as a lesbian or gay man'. In the same vein, the Birmingham NHS is looking for a 'Senior Health Promotion Officer', on £25,000, to join the Healthy Gay Life team.

This is the spirit that shines through 'Sexuality — the New Agenda', which was issued to local councils to provide guidance on a 2003 EU directive which outlaws discrimination on the grounds of sexual orientation. Mind-numbing officialese can be found throughout, as in the assertion that 'the Equality Standard is in itself a Best Value parameter in the form of a national performance indicator for all authorities'. Sir Humphrey would have been proud of that one.

But the determination of our new public servants to embrace homosexuality is all too obvious, if at times unfortunately expressed: the document explains that Manchester City Council has a 'bottom-up' approach to gay consultation, while Northamptonshire Council trumpets its funding for the lesbian and gay 'oral history' archive in the county. In the name of combating homophobia, no one can escape the influence of the gay evangelists. Local libraries are told to have gay sections and 'Proud to read' booklists; leisure departments are urged to follow the examples of Yorkshire City Council, which last year supported both a lesbian book festival and a lesbian opera. All schools should be given 'sexuality awareness training': all workforces should be provided with 'anti-homophobia' instruction. The ideological commitment of private-sector contractors is just as important. The LGA document instructs councils to 'monitor the work of contractors and sub-contractors to ensure that they consult with lesbian, gay and bisexual communities and respond to their needs'.

Just as the obsession with multiculturalism seeks to define everyone by their race, so the gay agenda aims to categorise everyone by their sexual orientation. So, on such private, often complex, emotions depend the structure of services and use of taxpay

ers' money. This is an approach which can only fragment society, promote intolerance and create a climate of grievance, but it is now the outlook that predominates. The LGA report was written in co-operation with Stonewall, the gay pressure group which has, in recent years. received more than £1.4 million of lottery-funded money to further its campaigning work. For instance, £89,000 has been given to research into 'the causes of homelessness amongst lesbian and gay youth' and another £29,000 is used to fund a 'prejudice research' project which will 'provide a cross-strand, cross-community approach to tackling prejudice'.

But the strongest indication of Stonewall's position lies in its own project Citizenship 21, which has been funded to the tune of no less than £892,000 by the National Lottery. Some of this lavish subsidy goes towards Citizenship 21's staff, who include project manager Ali Harris, a former campaigner for the Hebrew Immigrant Society, and Juris Lavikovs, the information officer who boasts that he once worked in the 'lesbian and gay movement in Latvia'. Much of the rest of the money goes on grants, many of which defy parody. So £5,000 has been spent on the 'South Asian Queer Photography Project' to produce a 'book of photographs showing the lives of South Asian lesbian, gay, bisexual and transgender communities living in England'; the same sum went to 'Dorothy's Helping Hand', which is 'a support group for lesbians, bisexual and heterosexual women in the Bolton area who are experiencing mental health difficulties'. Another grant was handed out to make 'a video documenting the Jewish Lesbian, Gay, Bisexual and Transgendered Experience' and there has also been backing for the 'Insight Drama Therapy Project', aimed at tackling racism and homophobia in Milton Keynes. There were also rewards for 'Out in the Countryside', which seeks to 'develop awareness of the lesbian, gay and bisexual community' in Scarborough, shamefully neglected until now, and the 'Cartooning Project', which brings 'disabled and non-disabled lesbians together' to 'raise sexuality awareness with disability communities through challenging images using postcards, posters and drinks mats'.

The gay discrimination industry, like the rest of the equality sector, has a vested interest in exaggerating the very problems it says it wants to resolve: the more alleged prejudice it uncovers, the more it can justify its demands for more funds and more powers. Whole new categories of oppression are being invented to provide work for the bureaucrats, such as Transphobia', the dislike of transsexuals. But, in its ever more hysterical campaigning, the industry is fast becoming guilty of its own prejudice: heterophobia — suspicion of straight, married couples.