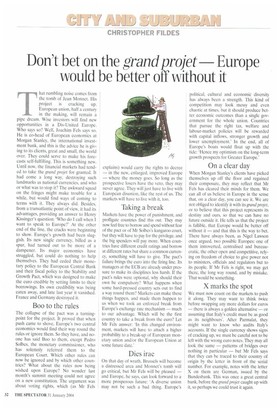 would be better off without it

hat rumbling noise comes from the tomb of Jean Monnet. His project is cracking up. European union, half a century in the making, will remain a pipe dream. Wise investors will find new opportunities in a Dis-United Europe. Who says so? Well, Joachim Fels says so. He is co-head of European economics at Morgan Stanley, the international investment bank, and this is the advice he is giving to its clients, great and small, the world over. They could serve to make his forecasts self-fulfilling. This is something new. Until now, the financial markets had tended to take the grand projet for granted. It had come a long way, destroying such landmarks as national currencies, and who or what was to stop it? The awkward squad on the fringes might make trouble for a while, but would find ways of coming to terms with it. They always did. Besides, from a transatlantic point of view, it had its advantages, providing an answer to Henry Kissinger's question: 'Who do I call when I want to speak to Europe?' At the other end of the line, the cracks were beginning to show. Europe's growth had been sluggish. Its new single currency, billed as a spur, had turned out to be more of a dampener. Its major economies have struggled, but could do nothing to help themselves. They had ceded their monetary policy to the European Central Bank and their fiscal policy to the Stability and Growth Pact, which was designed to make the euro credible by setting limits to their borrowings. Its own credibility was being eaten away, and late last year it vanished. France and Germany destroyed it.

Boo to the rules

The collapse of the pact was a turningpoint for the project. It proved that when push came to shove, Europe's two central economies would find their way round the rules or ignore them. So they have, and noone has said Boo to them, except Pedro Solbes, the monetary commissioner, who has solemnly referred them to the European Court. Which other rules can now be ignored and by which other countries? What about the rules now being wished upon Europe? No wonder last month's summit meeting could not agree on a new constitution. The argument was about voting rights, which (as Mr Fels explains) would carry the rights to decree — in the new, enlarged, improved Europe — where the money goes. So long as the prospective losers have the veto, they may never agree. They will just have to live with European disunion, like the rest of us. The markets will have to live with it, too.

Markets have the power of punishment, and profligate countries find this out. They may now feel free to borrow and spend without fear of the pact or of Mr Solbes's kangaroo court, but they will have to pay for the privilege, and the big spenders will pay more. When countries have different credit ratings and borrow at different rates but share a common currency, something will have to give. The pact's failure brings the euro into the firing line. Its managers at the ECB are already under pressure to make its disciplines less harsh. If the pact's rules were optional, why should their own be compulsory? What happens when some hard-pressed country sets out to find a way round them? Markets can make these things happen, and made them happen to us when we took an enforced break from Europe's exchange rate mechanism — much to our advantage. Which will be the first country to take a break from the euro? Let Mr Fels answer: 'In this changed environment, markets will have to attach a higher probability to a break-up of European monetary union and/or the European Union at some future date.'

On that day of wrath, Brussels will become a distressed area and Monnet's tomb will go critical, but Mr Fels will be pleased — and Europe, he says, can look forward to a more prosperous future: 'A diverse union may not be such a bad thing. Europe's political, cultural and economic diversity has always been a strength. This kind of competition may look messy and even chaotic at times, but it should produce better economic outcomes than a single government for the whole union. Countries that pursue the right tax, welfare and labour-market policies will be rewarded with capital inflows, stronger growth and lower unemployment.' In the end, all of Europe's boats would float up with the tide: 'Hence my optimism on the long-term growth prospects for Greater Europe.'

On a clear day

When Morgan Stanley's clients have picked themselves up off the floor and regained their composure, they may reflect that Mr Fels has cleared their minds for them. We can all of us believe in Europe in the sense that, on a clear day, you can see it. We are not obliged to identify it with its grand projet, or to believe that this project represents its destiny and ours, so that we can have no future outside it. He tells us that the project is fallible, that Europe would be better off without it — and that this is the way to bet. There have always been, as Nigel Lawson once argued, two possible Europes: one of them introverted, centralised and bureaucratic, the other open and competitive, relying on freedom of choice to give power not to ministers, officials and regulators but to its people. If Mr Fels is right, we may get there, the long way round, and by mistake. That would be something.

We must now count on the markets to push it along. They may want to think twice before swapping any more dollars for euros — there is always a golden alternative — or assuming that Italy's credit must be as good as its neighbours'. After Parmalat, they might want to know who audits Italy's accounts. If the single currency shows signs of cracking up, we must be careful not to be left with the wrong euro notes. They may all look the same — patterns of bridges over nothing in particular — but Mr Fels says that they can be traced to their country of origin by the letter in front of the serial number. For example, notes with the letter X on them are German, issued by the Bundesbank. This was once a great central bank, before the grand projet caught up with it, so perhaps we could trust it again.