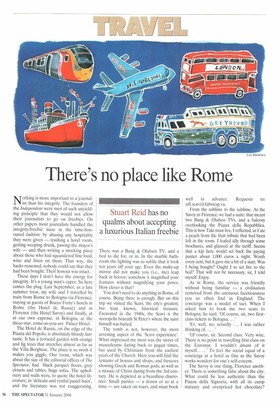 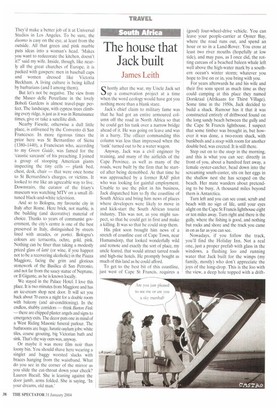 Stuart Reid has no qualms about accepting a luxurious Italian freebie

"1\T othing is more important to a journal1 ist than his integrity. The founders of the Independent were men of such unyielding principle that they would not allow their journalists to go on freebies. On other papers most journalists handled the integrity/freebie issue in the time-honoured fashion: by abusing any hospitality they were given — trashing a hotel room, getting weeping drunk, pawing the mayor's wife — and then writing a mocking piece about those who had squandered fine food, wine and linen on them. That way, the hacks reasoned, nobody could say that they had been bought. Their honour was intact.

These days I don't have the energy for integrity. It's a young man's caper. So here comes the plug. Last September, as a late summer treat, my wife and I travelled by train from Rome to Bologna via Florence, staying as guests of Rocco Forte's hotels in Rome (the Hotel de Russie) and in Florence (the Hotel Savoy) and finally, at at our own expense, in Bologna, at the three-star, come-as-you-are Palace Hotel.

The Hotel de Russie, on the edge of the Piazza del Popolo, is absolutely bloody fantastic. It has a terraced garden with orange and fig trees that stretches almost as far as the Villa Borghese. The place is so swish it makes you giggle. Our room, which was about the size of the editorial offices of The Spectator, had black parquet floors, grey closets and tables, huge sofas. The upholstery and walls were, to quote the hotel literature, in 'delicate and restful pastel hues', and the literature was not exaggerating.

There was a Bang & Olufsen TV, and a bed to die for, or in. In the marble bathroom the lighting was so subtle that it took ten years off your age. Even the make-up mirror did not make you (i.e., me) leap back in horror; somehow it magnified your features without magnifying your pores. How clever is that?

You don't need to do anything in Rome, of course. Being there is enough. But on this trip we visited the Scavi, the city's greatest, but least known, historical treasure. Excavated in the 1940s, the Scavi is the necropolis beneath St Peter's where the saint himself was buried.

The tomb is not, however, the most arresting aspect of the `Scavi experience'. What impressed me most was the street of mausoleums dating back to pagan times, but used by Christians from the earliest years of the Church. Here you will find the remains of houses and shops, and frescoes showing Greek and Roman gods, as well as a mosaic of Christ dating from the 3rd century. He is depicted as a beardless charioteer. Small parties — a dozen or so at a time — are taken on tours, and must book well in advance. Requests to: uff.scavi @fabricsp.va.

From the sublime to the sublime. At the Savoy in Florence, we had a suite: that meant two Bang & Olufsen TVs, and a balcony overlooking the Piazza della Repubblica. This is how Taki must live, I reflected, as I ate a peach from the fruit tribute that had been left in the room. I leafed idly through some brochures, and glanced at the tariff. Seems that a kip here would set back the paying punter about 1,090 euros a night. Worth every cent, but it gave me a bit of a start. Was I being bought? Ought I to set fire to the bed? That will not be necessary, sir, I told myself. Enjoy.

As in Rome, the service was friendly without being familiar — a civilisation removed from the unctuous facetiousness you so often find in England. The concierge was a model of tact. When I asked him to book me two seats to Bologna, he said, 'Of course, sir, two firstclass tickets to Bologna. . . '

'Of course, sir. Second class. Very wise. There is no point in travelling first class on the Eurostar. I wouldn't dream of it myself. . . . ' To feel the social equal of a concierge at a hotel as fine as the Savoy works wonders for one's self-esteem.

The Savoy is one thing, Florence another. There is something false about the city. What could be less authentic than the Piazza della Signoria, with all its camp statuary and overpriced hot chocolate?

They'd make a better job of it at Universal Studios in Los Angeles. To be sure, the duomo is easy on the eye, at least from the outside. All that green and pink marble puts ideas into a woman's head. 'Makes you want to redecorate the kitchen, doesn't it?' said my wife. Inside, though, like nearly all the great churches of Europe, it is packed with gawpers: men in baseball caps and women dressed like Victoria Beckham. A living culture is being killed by barbarians (and I among them).

But let's not be negative. The view from the Museo delle Percellane in the lovely Boboli Gardens is almost travel-page perfect. The landscape, with cypress trees climbing every ridge, is just as it was in Renaissance times, give or take a satellite dish.

Nearby Fiesole, otherwise a dull little place, is enlivened by the Convento di San Francesco. In more rigorous times the prior here was St Bernardino of Siena (1380-1440), a Franciscan who, according to my Green Guide, was famed for the 'caustic sarcasm' of his preaching. I joined a group of stooping American giants inspecting the tiny cells — plank bed, chest, desk, chair — that were once home to St Bernardino's charges, or victims. It looked to me like an agreeable way to live. Downstairs, the curator of the friary's museum was watching MTV on a small illtuned black-and-white television.

And so to Bologna, my favourite city in Italy after Rome. Here brick, not marble, is the building (and decorative) material of choice. Thanks to years of communist government, the city's centre is one of the best preserved in Italy, distinguished by streets lined with arcades, or portici. Bologna's colours are terracotta, ochre, gold, pink. Nothing can be finer than taking a modestly priced glass of /atte (or wine, if you happen not to be a recovering alcoholic) in the Pia7za Maggiore, facing the grim and glorious stonework of the Basilica di San Petronio, and not far from the saucy statue of Neptune, or Ii Gigante, as he is known locally.

We stayed in the Palace Hotel. I love this place. It is two minutes from Maggiore and has an ice-cream shop next door. It will set you back about 70 euros a night for a double room with balcony (and air-conditioning). In the endless, shabby corridors — think Barton Fink — there are chipped plaster angels and signs to emergency exits. The decor puts one in mind of a West Riding Masonic funeral parlour. The bathrooms are huge, lunatic-asylum jobs: white tiles, coarse grouting, big Victorian bath and sink. That's the way ours was, anyway.

Or maybe it was more film noir than loony bin. You should shave here wearing a singlet and baggy worsted slacks with braces hanging from the waistband. What do you see in the corner of the mirror as you slide the cut-throat down your cheek? Lauren Bacall. She is leaning against the door jamb, arms folded. She is saying. 'In your dreams, old man.'