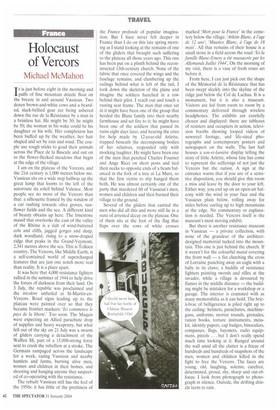 It is just before eight in the morning and puffs of fine mountain drizzle float on the breeze in and around Vassieux. Two dozen brown-and-white cows and a bearded, slack-bellied goat are being ushered down the rue de la Resistance by a man in a brimless hat. He might be 30; he might be 50; the woman in his wake could be his daughter or his wife. Her complexion has been buffed up by the weather, her hair shaped and set by rain and wind. The couple use rough sticks to goad their animals across the Place de la Bascule and out on to the flower-flecked meadows that begin at the edge of the village.

I am on the plateau of the Vercors, and the 21st century is 1,000 metres below me. Vassieux sits on a wide step halfway up the great lump that looms to the left of the autoroute du soleil behind Valence. Most people see no more of the Vercors than that: a silhouette framed by the window of a car rushing towards olive groves, sunflower fields and the sea. A different kind of beauty obtains up here. The limestone massif that overlooks the east of the valley of the Rhone is a slab of wind-battered cols and cliffs, jagged gorges and deep, dark woodland, rising to a snow-draped ridge that peaks in the Grand-Veyrnont, 2,341 metres above the sea. This is Tolkien country. The Vercors, like Middle Earth, is a self-contained world of supercharged features that are just one notch more real than reality. It is a place apart.

It was here that 4,000 resistance fighters rallied in the summer of 1944 to help drive the forces of darkness from their land. On 3 July, the republic was proclaimed and the tricolore unfurled at St-Martin-enVercors. Road signs leading up to the plateau were painted over so that they became frontier markers; Id commence le pays de la liberte.' Too soon. The Maquis were expecting an Allied parachute drop of supplies and heavy weaponry, but what fell out of the sky on 21 July was a swarm of gliders carrying a detachment of the Waffen SS, part of a 15,000-strong force sent to crush the rebellion at a stroke. The Germans rampaged across the landscape for a week, razing Vassieux and nearby hamlets and farms, burning alive men, women and children in their homes, and shooting and hanging anyone they suspected of co-operating with the resistance.

The rebuilt Vassieux still has the feel of the 1950s: it has little of the prettiness of

the France profonde of popular imagination. But I have never felt deeper in France than I do on this late spring morning as I stand looking at the remains of one of the gliders that brought such suffering to the plateau all those years ago. This one has been put on a plinth behind the reconstructed 13th-century church. None of the fabric that once covered the wings and the fuselage remains, and clambering up the railings behind what is left of the tail, I look down the skeleton of the plane and imagine the soldiers hunched in a row behind their pilot. I reach out and touch a rusting seat frame. The man that once sat in it might have been one of the group that herded the Blanc family into their nearby farmhouse and set fire to it; he might have been one of the soldiers that passed its ruins eight days later, and hearing the cries for help made by 12-year-old Arlette, trapped beneath the decomposing bodies of her relatives, responded only with mocking laughter. He might have been one of the men that perched Charles Fournet and Ange Ricci on short posts and tied their necks to opposite ends of a beam balanced in the fork of a tree at La Mure, so that the first victim to slip hanged them both. He was almost certainly one of the party that murdered 60 of Vassieux's men, women and children and then burned their village to the ground.

Several of the gliders that carried the men who did all this and more still lie in a state of arrested decay on the plateau. One of them sits at the foot of the flag that flaps over the rows of white crosses marked 'Mort pour la France' in the cemetery below the village. 'Arlene Blanc, a l'age de 12 ans'; 'Maurice Blanc, a rage de 18 mois'. All that remains of their house is a small stone in a field across the road: 'Ici la famille Blanc-Emery a ete massacree par les Allemands ballet 1944', On the morning of my visit, there is a vase of fresh roses set before it.

From here, I can just pick out the shape of the Memorial de la Resistance that has been swept sleekly into the skyline of the ridge just below the Col de Lachau. It is a monument, but it is also a museum. Visitors are led from room to room by a commentary delivered through wireless headphones. The exhibits are carefully chosen and displayed: there are tableaux of resisters and occupiers in action, television booths showing looped videos of newsreel footage, and life-sized photographs and contemporary posters and newspapers on the walls. The last hall houses a son-et-lumiere display telling the story of little Arlette, whose fate has come to represent the sufferings of not just the Vercors but the nation. A sign at the entrance warns that if you are of a sensitive disposition, you should give this room a miss and leave by the door to your left. Either way, you end up on an open-air balcony with the wind in your face and the Vassieux plain below, rolling away for miles before curling up to high mountains at the edge. No commentary or explanation is needed. The Vercors itself is the museum's most moving exhibit.

But there is another resistance museum in Vassieux — a private collection, with none of the grandeur of the architectdesigned memorial tucked into the mountain. This one is just behind the church. If it weren't for the colourful mural covering the front wall — a fist clutching the cross of Lorraine punching away an eagle with a baby in its claws; a huddle of resistance fighters pointing swords and rifles at the invader, while a village is devoured by flames in the middle distance — the building might be mistaken for a workshop or a garage. The interior is crammed with as many memorabilia as it can hold. The bric-a-brac of belligerence is piled right up to the ceiling: helmets, parachutes, machineguns, uniforms, mortar rounds, grenades, ration books, torture instruments, messkit, identity papers, cap badges, binoculars, compasses, flags, bayonets, radio equipment, pistols . . . but I don't really spend much time looking at it. Ranged around the wall amid all the clutter is a frieze of hundreds and hundreds of snapshots of the men, women and children killed in the fight to free the Vercors. The faces are young, old, laughing, solemn, carefree, determined, proud, shy, sharp and out-offocus. I look from photograph to photograph in silence. Outside, the drifting drizzle turns to rain.