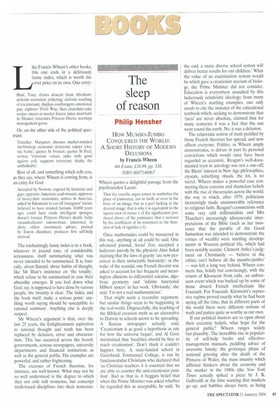 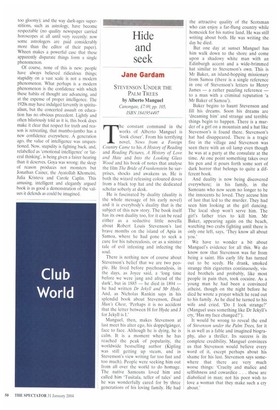 The sleep of reason

How MUMBO-JUMBO CONQUERED THE WORLD: A SHORT HISTORY OF MODERN DELUSIONS by Francis Wheen 4th Estate, £16.99, pp. 338, ISBN 0007140967 Like Francis Wheen's other books, this one ends in a deliriously funny index, which is worth the over price on its own. One entry:

Or, on the other side of the political spectrum:

Best of all, and something which tells you, as they say, where Wheen is coming from, is an entry for God:

The enchantingly funny index is to a book, whatever its jocund tone, of considerable seriousness, itself summarising what was never intended to be summarised. It is, basically, about flannel; about habits of thought, like Mr Blair's insistence on 'the totality', which refuse to be summarised in case their absurdity emerges. If you boil down what God, say, is supposed to have done by various people, the insanity is clear. The index, and the book itself, make a serious point: anything worth saying should be susceptible to rational summary. Anything else is deeply suspect.

Mr Wheen's argument is that, over the last 25 years, the Enlightenment aspiration to rational thought and truth has been replaced by delusion, error and obscurantism. This has occurred across the board; governments, serious newspapers, university departments and financial institutions as well as the general public. His examples are powerful, and rather frightening. The excesses of French theorists, for instance, are well-known. What may not be so well understood is the degree to which they not only talk nonsense, but conscript truth-based disciplines into their nonsense. Wheen quotes a delightful passage from the psychoanalyst Lacan:

Thus the erectile organ comes to symbolise the place of jouissance, not in itself, or even in the form of an image, but as a part lacking in the desired image: that is why it is equivalent to the square root of minus 1 of the signification produced above, of the jouissance that it restores by the coefficient of its statement to the function of lack of signifier (-1).

Once mathematics could be massacred in this way, anything at all could be said. One advanced journal, Social Text, accepted a ludicrous parody by the physicist Alan Sokal claiming that the laws of gravity 'are now perceived in their ineluctable historicity'; in the wake of the scandal, one French theorist was asked to account for her frequent and meaningless allusions to differential calculus, algebraic geometry and 'infinite functional Hilbert spaces' in her work. 'Obviously,' she said, 'I'm not a real mathematician.'

That might seem a recondite argument, but similar things seem to be happening in the real world. Disgracefully, the teaching of the Biblical creation myth as an alternative to Darwin in schools seems to be spreading. A Kansas newspaper actually said, 'Creationism is as good a hypothesis as any for how the universe began', and Al Gore maintained that 'localities should be free to teach creationism'. Don't think it couldn't happen here. A state-funded school in Gateshead, Emmanuel College, is run by fundamentalist Christians who declared that 'as Christian teachers it is essential that we are able to counter the anti-creationist position'. Bad as that is, it beggars belief that when the Prime Minister was asked whether he regarded this as acceptable, he said, 'In the end, a more diverse school system will deliver better results for our children.' What the value of an examination system would be which gave a creationist account of biology, the Prime Minister did not consider. Education is everywhere assaulted by this ludicrously relativistic ideology; from many of Wheen's startling examples, one only needs to cite the instance of the educational textbook which, seeking to demonstrate that 'facts' are never absolute, claimed that for many centuries it was a fact that the sun went round the earth. No: it was a delusion.

The relativistic notion of truth peddled by those French theorists has spread, and now affects everyone. Politics, as Wheen amply demonstrates, is driven in part by personal convictions which would once have been regarded as eccentric. Reagan's well-documented trust in astrology was not a one-off; the Blairs' interest in New Age philosophies, crystals, rebirthing rituals, the lot, is no secret. Wheen makes a powerful case connecting these extreme and shameless beliefs with the rise of theocracies across the world; the way in which, after 1979, politicians increasingly made unanswerable reference to religious faith. Reagan's connections with some very odd millennialists and Mrs Thatcher's increasingly idiosyncratic interpretations of the Bible (such as her insistence that the parable of the Good Samaritan was intended to demonstrate the virtues of wealth) were startling developments in Western political life, which had been notably secular. Clement Attlee's judgment on Christianity — 'believe in the ethics; can't believe all the mumbo-jumbo' — was left a long way behind. Wheen connects this, boldly but convincingly, with the return of Khomeini from exile, an unforeseen event which was backed up by some of those absurd French intellectuals like Foucault. For Foucault, Ithomeini's repressive regime proved exactly what he had been saying all the time, that in different parts of the world there were different notions of truth and justice quite as worthy as our own. If our political masters are so open about their eccentric beliefs, what hope for the general public? Wheen ranges widely but plausibly. The incredible rise in popularity of self-help books and effectivemanagement manuals, peddling advice of awesome fatuity; the grotesque phase of national grieving after the death of the Princess of Wales; the mass insanity which afflicted thinkers about the economy and the market in the 1980s (the New York Times actually spiked a piece by J. K. Galbraith at the time warning that markets go up, and bubbles always burst, as being

too gloomy); and the way dark-ages superstitions, such as astrology, have become respectable (no quality newspaper carried horoscopes at all until very recently: now some astrologers are paid considerably more than the editor of their paper). Wheen makes a powerful case that these apparently disparate things form a single phenomenon.

Of course, none of this is new: people have always believed ridiculous things; stupidity on a vast scale is not a modern phenomenon. What perhaps is a modern phenomenon is the confidence with which these habits of thought are advancing, and at the expense of proper intelligence. The 1920s may have indulged fervently in spiritualism, but the concerted assault on education has no obvious precedent. Lightly and often hilariously told as it is, this book does make it clear that respect for truth and reason is retreating, that mumbo-jumbo has a new confidence everywhere. A generation ago, the value of intelligence was unquestioned. Now, stupidity is fighting back, and, relabelled as 'emotional intelligence' or 'lateral thinking', is being given a fairer hearing than it deserves. Goya was wrong: the sleep of reason produces not monsters but Jonathan Cainer, the Ayatollah Khomeini, Julia Kristeva and Carole Caplin. This amusing, intelligent and elegantly argued book is as good a demonstration of the values it defends as could be imagined.