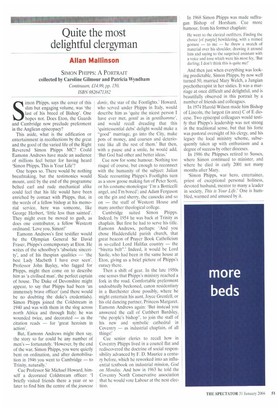 Quite the most delightful clergyman

SIMON PHIPPS: A PORTRAIT collected by Caroline Gilmour and Patricia Wyndham Continuum, £14.99, pp. 150, ISBN 0826471382 Simon Phipps, says the cover of this slim but engaging volume, was 'the last of his breed of Bishop'. One hopes not. Does Eton, the Guards and Cambridge now preclude preferment in the Anglican episcopacy?

This aside, what is the edification or entertainment in recollections by the great and the good of the varied life of the Right Reverend Simon Phipps MC? Could Eamonn Andrews have made an audience of millions feel better for having heard 'Simon Phipps, This is Your Life'?

One hopes so. There would be nothing breathtaking, but the testimonies would mount, until by the end of the programme belted earl and rude mechanical alike could feel that his life would have been enriched by contact with Phipps, that, in the words of a fellow bishop at his memorial service, here was someone, like George Herbert, 'little less than sainted'. They might even be moved to gush, as does one contributor, a fellow Westcott ordinand, 'Love you, Simon!'

Eamonn Andrews's first testifier would be the Olympian General Sir David Fraser. Phipps's contemporary at Eton. He writes of the schoolboy's 'absolute sincerity', and of his thespian qualities — 'the best Lady Macbeth I have ever seen'. Professor John Bayley, who fagged for Phipps, might then come on to describe him as 'a civilised man', the perfect captain of house. The Duke of Devonshire might appear, to say that Phipps had been 'an immensely brave officer' (and there would be no doubting the duke's credentials). Simon Phipps joined the Coldstream in 1940 and was with them in the slog across north Africa and through Italy; he was wounded twice, and decorated — as the citation reads — for 'great heroism in action'.

But, Eamonn Andrews might then say, the story so far could be any number of men's — fortunately. 'However, by the end of the war, Simon Phipps, you were quietly bent on ordination, and after demobilisation in 1946 you went to Cambridge — to Trinity, naturally.'

Cue Professor Sir Michael Howard, himself a decorated Coldstream officer: 'I briefly visited friends there a year or so later to find him the centre of the jeunesse doree, the star of the Footlights.' Howard, who served under Phipps in Italy, would describe him as 'quite the nicest person I have ever met, gentil as in gentilhomme', and would recall dreading that this 'quintessential debs' delight would make a "good" marriage, go into the City, make pots of money, and coarsen and deteriorate like all the rest of them.' But then, with a pause and a smile, he would add, 'But God had other and better ideas.'

Cue now for some humour. Nothing too risque of course, but enough to reconnect with the humanity of the subject: Julian Slade recounting Phipps's Footlights turn as a snow goose making fun of Peter Scott, or his costume-monologue 'I'm a Botticelli angel, and I'm bored': and Adam Ferguson on the gin and sherry, the cassocks and so on — the stuff of Westcott House and many another theological college.

Cambridge suited Simon Phipps. Indeed. by 1954 he was back at Trinity as chaplain. But first he had to serve his title. Eamonn Andrews, perhaps: 'And you chose Huddersfield parish church, that great beacon of Prayer Book Catholicism in so-called Lord Halifax country — the "biretta belt".' Indeed, it would be Lord Savile, who had been in the same house at Eton, giving us a brief picture of Phipps's curacy there.

Then a shift of gear. In the late 1950s one senses that Phipps's ministry reached a fork in the road. Comfortable preferment undoubtedly beckoned, canon residentiary in a Barchester close possibly, where he might entertain his aunt, Joyce Grenfell, or his old dancing partner, Princess Margaret. Eamonn Andrews again: 'But instead you answered the call of Cuthbert Bardsley, "the people's bishop", to join the staff of his new and symbolic cathedral in Coventry — as industrial chaplain, of all things!'

Cue senior clerics to recall how in Coventry Phipps lived in a council flat and rediscovered the doctrine of social responsibility advanced by F. D. Maurice a century before, which he reworked into an influential textbook on industrial mission, God on Monday. And how in 1963 he told the Coventry North Conservative association that he would vote Labour at the next election.

In 1968 Simon Phipps was made suffragan Bishop of Horsham. Cue more humour, from his former chaplain:

He went to the clerical outfitters. Finding the choice [of purple] bewildering, with a mimed gesture — to me — he threw a swatch of material over his shoulder, drawing it around him and saying to the surprised assistant with a voice and tone which were his most fey, 'But darling: I don't think this is quite me!'

And then just when everything was looking predictable, Simon Phipps, by now well turned 50, married Mary Welch, a Jungian psychotherapist in her sixties. It was a marriage at once difficult and delightful, and is beautifully observed in this portrait by a number of friends and colleagues.

In 1974 Harold Wilson made him Bishop of Lincoln, the largest (in area) C of E diocese. Two episcopal colleagues would testify that Phipps's leadership was not strong in the traditional sense, but that his forte was pastoral oversight of his clergy, and his legacy the local ministry scheme, subsequently taken up with enthusiasm and a degree of success by other dioceses.

In 1986 the Phippses retired to Sussex, where Simon continued to minister, and where he died in early 2001 not many months after Mary.

'Simon Phipps, war hero, entertainer, priest of exceptional personal holiness, devoted husband, mentor to many a leader in society, This is Your Life.' One is humbled, warmed and amused by it,