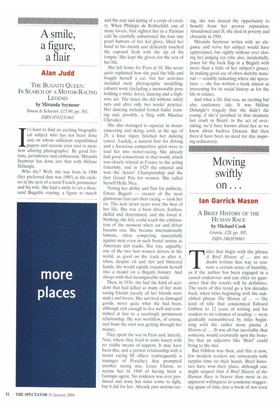 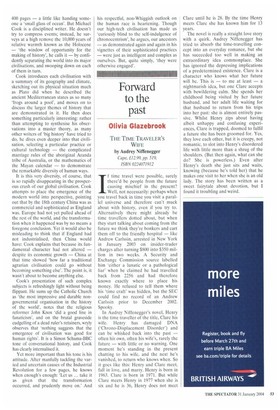 A BRIEF HISTORY OF THE HUMAN RACE by Michael Cook Granta, £20, pp. 385, ISBN 1862076861 Titles that begin with the phrase A Brief History of ... are no doubt written that way to connote a certain sense of humility, as if the author has been engaged in a casual endeavour and can offer no guarantee that the results will be definitive. The roots of this trend go a few decades back, when titles beginning with the oakribbed phrase The History of ... — the kind of title that condemned Edward Gibbon to 12 years of writing and his readers to six volumes of reading — were gradually outnumbered by titles beginning with the rather more plastic A History of.... It was all but inevitable that someone would eventually spot the benefits that an adjective like 'Brief' could bring to the mix.

But Gibbon was then, and this is now; few modern readers are aristocrats with surplus time on their hands. Brief histories have won their place, although one might suspect that A Brief History of the Human Race is braver than most in its apparent willingness to condense staggering spans of time into a book of not even

400 pages — a little like handing someone a 'small glass of ocean'. But Michael Cook is a disciplined writer. He doesn't try to compress events; instead, he surveys at a high remove the 10,000 years of relative warmth known as the Holocene — 'the window of opportunity for the making of history', he calls it — by confidently separating the world into its major civilisations, and swooping down on each of them in turn.

Cook introduces each civilisation with a summary of its geography and climate, sketching out its physical situation much as Plato did when he described the ancient Mediterranean states as so many 'frogs around a pool', and moves on to discuss the larger themes of history that are demonstrated in it. He then does something particularly interesting: rather than attempting to synthesise his observations into a master theory, as many other writers of 'big history' have tried to do, he dives even deeper into that civilisation, selecting a particular practice or cultural technology — the complicated marriage rules of the aboriginal Aranda tribe of Australia, or the mathematics of the Mayan calendar — to demonstrate the remarkable diversity of human ways.

It is this very diversity, of course, that is so rapidly disappearing in the prosperous crush of our global civilisation. Cook attempts to place the emergence of the modern world into perspective, pointing out that by the 18th century China was as commercial and sophisticated as England was. Europe had not yet pulled ahead of the rest of the world, and the transformation when it happened was by no means a foregone conclusion. Yet it would also be misleading to think that if England had not industrialised, then China would have: Cook explains that because its fundamental character had not altered — despite its economic growth — China at that time showed 'how far a traditional agrarian civilisation could go without becoming something else'. The point is, it wasn't about to become anything else.

Cook's presentation of such complex subjects is refreshingly light without being flippant. He sums up the Catholic Church as 'the most impressive and durable nongovernmental organisation in the history of the world', notes that the religious reformer John Knox 'did a good line in fanaticism', and on the brutal graveside cudgelling of a dead ruler's retainers, wryly observes that 'nothing suggests that the emergence of civilisation was good for human rights'. It is a Simon Schama-BBC tone of conversational history, and Cook has clearly internalised it.

Yet more important than his tone is his attitude. After manfully tackling the varied and uncertain causes of the Industrial Revolution for a few pages, he knows when enough's enough: 'Let us ... take it as given that the transformation occurred, and prudently move on.' And his respectful, non-Whiggish outlook on the human race is heartening. Though our high-tech civilisation has made us 'curiously blind to the self-indulgence of chronocentrism', he argues, our ancestors — as demonstrated again and again in his vignettes of their sophisticated practices — were just as intelligent and complex as ourselves. But, quite simply, 'they were otherwise engaged'.