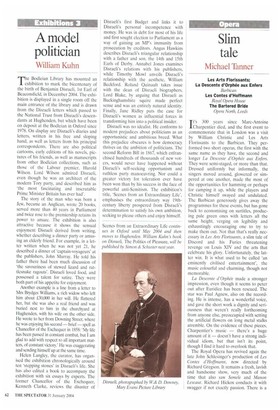 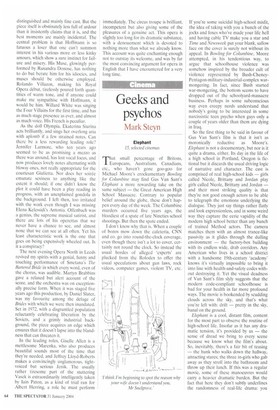 Ies 300 years since Marc-Antoine Charpentier died, and the first event to commemorate that in London was a visit by William Christie and Les Arts Florissants to the Barbican. They performed two short operas, the first with the same name as they have, the second and longer La Descente d'Orphee aux Enfers. They were semi-staged, or more than that. Dressed uniformly but informally, the singers moved around, glowered or simpered at one another, made the most of the opportunities for hamming or perhaps for camping it up, while the players and Christie himself swayed and undulated. The Barbican generously gives away the programmes for these events, but has gone back to economising on surtitles, producing pale green ones with letters all the same height, verging on legibility and exhaustingly encouraging one to try to make them out. Not that that's really necessary in Les Arts Florissants, a slim tale of Discord and his Furies threatening revenge on Louis XIV and the arts that celebrate his glory. Unfortunately, the latter win. It is what used to be called 'an eminently civilised entertainment', the music colourful and charming, though not memorable.

La Descente d'Otphee made a stronger impression, even though it seems to peter out after Euridice has been rescued. The star was Paul Agnew, also on the recording. He is intense, has a wonderful voice, and gave the short work a dignity and seriousness that weren't really forthcoming from anyone else, preoccupied with setting the artificial flowers on long metal stalks atremble. On the evidence of these pieces, Charpentier's music — there's a huge amount of it — doesn't have a strong individual idiom, but that isn't its point, though I find it hard to overlook that.

The Royal Opera has revived again the late John Schlesinger's production of Les Contes d'Hoffmann, now directed by Richard Gregson. It remains a fresh, lavish and handsome show, very much of the time that also saw Semele and Manon Lescaut. Richard Hickox conducts it with swagger if not exactly passion. There is a distinguished and mainly fine cast. But the piece itself is obstinately less full of ardour than it insistently claims that it is, and the best moments are mainly incidental. The central problem is that Hoffmann is so fatuous a loser that one can't summon interest in his various more or less kinky amours, which show a sure instinct for failure and misery. His Muse, glowingly performed by Ruxandra Donose, has nothing to do but berate him for his idiocies, and muses should be otherwise employed. Rolando Villazon, making hi S Royal Opera debut, tirelessly poured forth quantities of warm tone, and if anyone could make me sympathise with Hoffmann, it would be him. Willard White was singing the Four Villains for the first time, and has as much stage presence as ever, and almost as much voice. His French is peculiar.

As the doll Olympia, Ekaterina Siurina acts brilliantly, and sings her overlong aria with aplomb if a few strained notes. Can there be a less rewarding leading role? Jennifer Larmore, who ten years ago seemed to be as promising a mezzo as there was around, has lost vocal focus, and now produces lovely notes alternating with blowsy ones, not really appropriate for the courtesan Giulietta. Nor does her soiree emanate sexiness to anything like the extent it should; if one didn't know the plot it could have been a play reading in progress, with an unexplained gondola in the background. I left then, too irritated with the work even though I was missing Elena Kelessidi's Antonia. Offenbach was a genius, the supreme musical satirist, and there are lots of his operettas that we never have a chance to see, and almost none that we can see at all often. Yet his least characteristic work is the one that goes on being expensively wheeled out. Is it a conspiracy?

The next evening Opera North in Leeds revived my spirits with a genial, funny and touching performance of Smetana's The Bartered Bride in which every word, even of the chorus, was audible. Martyn Brabbins gave a relaxed but alert account of the score, and the orchestra was on exceptionally precise form. When it was staged five years ago this production, by Daniel Slater, was my favourite among the deluge of Brides with which we were then inundated. Set in 1972, with a disgruntled population reluctantly celebrating liberation by the Soviets, and a grimly industrial background, the piece acquires an edge which ensures that it doesn't lapse into the blandness that can threaten it.

In the leading roles, Giselle Allen is a mettlesome Marenka, who also produces beautiful sounds most of the time that they're needed, and Jeffrey Lloyd-Roberts makes a convincingly unglamorous, tightvoiced but serious Jenik. The usually rather tiresome part of the stuttering Vasek is extraordinarily intelligently taken by fain Paton, as a kind of trial run for Albert Herring, a role he must perform immediately. The circus troupe is brilliant, incompetent but also giving some of the pleasures of a genuine act. This opera is slightly too long for its dramatic substance, with a denouement which is devoted to nothing more than what we already know. This account was quite enchanting enough not to outstay its welcome, and was by far the most convincing argument for opera in English that I have encountered for a very long time.