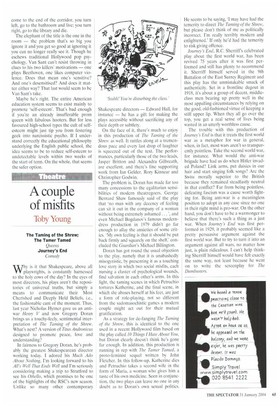 A couple of misfits

The Taming of the Shrew; The Tamer Tamed Queens Journey's End Comedy

Why is it that Shakespeare, above all playwrights, is constantly harnessed to the holy cows of the day? In the eyes of most directors, his plays aren't the repositories of universal truths, but simply a means to communicate their Most Cherished and Deeply Held Beliefs, i.e., the fashionable cant of the moment. Thus, last year Nicholas Hytner gave us an antiwar Henry V and now Gregory Doran brings us a touchy-feely, sentimental interpretation of The Taming of the Shrew. What's next? A version of Titus Andronicus designed to promote peace, love and understanding?

In fairness to Gregory Doran, he's probably the greatest Shakespearean director working today. I adored his Much Ado About Nothing, I'm looking forward to his All's Well That Ends Well and I'm seriously considering making a trip to Stratford to see his Othello, which promises to be one of the highlights of the RSC's new season. Unlike so many other contemporary Shakespeare directors — Edward Hall, for instance — he has a gift for making the plays accessible without sacrificing any of their depth or subtlety.

On the face of it, there's much to enjoy in this production of The Taming of the Shrew as well. It rattles along at a tremendous pace and every last drop of laughter is squeezed out of the text. The performances, particularly those of the two leads, Jasper Britton and Alexandra Gilbreath, are excellent, and there's fine supporting work from Ian Gelder, Rory Kinnear and Christopher Godwin.

The problem is, Doran has made far too many concessions to the egalitarian sensibilities of modern theatregoers. George Bernard Shaw famously said of the play that 'no man with any decency of feeling can sit it out in the company of a woman without being extremely ashamed ... ', and even Michael Bogdanov's famous moderndress production in 1979 didn't go far enough to allay the anxieties of some critics. 'My own feeling is that it should be put back firmly and squarely on the shelf,' concluded the Guardian's Michael Billington.

Doran has got round the usual objection to the play, namely that it is unabashedly misogynistic, by presenting it as a touching love story in which two social misfits, each nursing a cluster of psychological wounds, find salvation in each other's arms. In this light, the taming scenes in which Petruchio tortures Katherine, and the final scene, in which she abases herself at his feet, are just a form of role-playing, not so different from the sadomasochistic games a modern couple might act out for their mutual gratification.

As a strategy for de-fanging The Taming of the Shrew, this is identical to the one used in a recent Hollywood film based on the play called 10 Things I Hate About You, but Doran clearly doesn't think he's gone far enough. In addition, this production is running in rep with The Tamer Tamed, a proto-feminist sequel written by John Fletcher. In this follow-up, Katherine dies and Petruchio takes a second wife in the form of Maria, a woman who gives him a taste of his own medicine. Seen in conjunction, the two plays can leave no one in any doubt as to Doran's own sexual politics.

Journey's End, R.C. Sherriffs celebrated play about the first world war, has been revived 75 years after it was first performed and still has plenty to recommend it. Sherriff himself served in the 9th Battalion of the East Surrey Regiment and this play has the unmistakable smack of authenticity. Set in a frontline dugout in 1918, it's about a group of decent, middleclass men bearing up pretty well in the most appalling circumstances by relying on the good, old-fashioned virtue of keeping a stiff upper lip. When they all go over the top, you get a real sense of lives being wasted in an utterly worthless cause.

The trouble with this production of Journey's End is that it treats the first world war as a metaphor for war in general, when, in fact, most wars aren't so transparently pointless. Take the second world war, for instance. What would the anti-war brigade have had us do when Hitler invaded Poland? Link arms, put daisies in our hair and start singing folk songs? Are the Swiss morally superior to the British because they remained steadfastly neutral in that conflict? Far from being pointless, defeating fascism was a cause worth fighting for. Being anti-war is a meaningless position to adopt in any case since no one in their right mind is pro-war. On the other hand, you don't have to be a warmonger to believe that there's such a thing as a just war. When Journey's End was first performed in 1929, it probably seemed like a pretty persuasive argument against the first world war. But to try to turn it into an argument against all wars, no matter how just, is plain ridiculous. I can't help thinking Sherriff himself would have felt exactly the same way, not least because he went on to write the screenplay for The Dambusters.