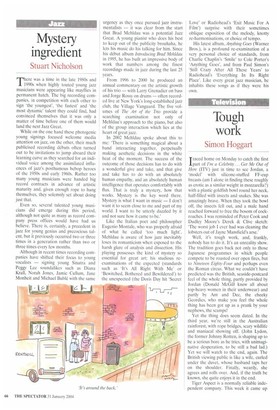 There was a time in the late 1980s and 1990s when highly touted young jazz musicians were appearing like mayflies in permanent hatch. The big recording companies, in competition with each other to sign 'the youngest', 'the fastest' and 'the most dynamic' talent they could find, had convinced themselves that it was only a matter of time before one of them would land the next Jazz Great.

While on the one hand these photogenic young signings focused welcome media attention on jazz, on the other, their much publicised recording debuts often turned out to be invitations to jump aboard their learning curve as they searched for an individual voice among the assimilated influences of jazz's posthumous bebop heroes of the 1950s and early 1960s. Rather too many young musicians were handed big record contracts in advance of artistic maturity and, given enough rope to hang themselves, they solemnly set about doing just that.

Even so, several talented young musicians did emerge during this period, although not quite as many as record company press offices would have had us believe. There is, certainly, a precedent in jazz for young genius and precocious talent, but it previously occurred two or three times in a generation rather than two or three times every few months.

Although in recent times recording companies have shifted their focus to young vocalists — signing young Sinatra and Peggy Lee soundalikes such as Diana Kra11, Norah Jones, Jamie Cullum, Jane Monheit and Michael Buble with the same

urgency as they once pursued jazz instrumentalists — it was clear from the start that Brad Mehldau was a potential Jazz Great. A young pianist who does his best to keep out of the publicity brouhaha, he lets his music do his talking for him. Since his debut album Introducing Brad Mehldau in 1995, he has built an impressive body of work that numbers among the finest recordings made in jazz during the last 25 years.

From 1996 to 2000 he produced an annual commentary on the artistic growth of his trio — with Larry Grenadier on bass and Jorge Rossy on drums — often recorded live at New York's long-established jazz club, the Village Vanguard. The five volumes of The Art of the Trio provide a searching examination not only of Mehldau's approach to the piano, but also of the group interaction which lies at the heart of great jazz.

In 2002 Mehldau spoke about this to me: 'There is something magical about a band interacting together, perpetually making aesthetic decisions in the white heat of the moment. The success of the outcome of those decisions has to do with a wonderful give and take, and that give and take has to do with an absolutely human empathy, and an absolutely human intelligence that operates comfortably with flux. That is truly a mystery, how that works. Mystery is the key word there. Mystery is what I want in music — I don't want it to seem close to me and part of my world. I want to be utterly dazzled by it and not sure how it came to be.'

Like the Italian poet and philosopher Eugenio Montale, who was properly afraid of what he called 'too much light', Mehldau is aware of how jazz inevitably loses its romanticism when exposed to the harsh glare of analysis and dissection. His playing possesses the kind of mystery so essential for great art; his studious reexaminations of the expected (standards such as 'It's All Right With Me' or 'Bewitched, Bothered and Bewildered') to the unexpected (the Doris Day hit 'Secret Love' or Radiohead's 'Exit Music For A Film') surprise with their sometimes oblique exposition of the melody, knotty re-harmonisations, or choice of tempo.

His latest album, Anything Goes (Warner Bros.), is a profound re-examination of a very personal choice of standards, from Charlie Chaplin's 'Smile' to Cole Porter's 'Anything Goes', and from Paul Simon's 'Still Crazy After All These Years' to Radiohead's 'Everything In Its Right Place'. Like every great jazz musician, he inhabits these songs as if they were his own.