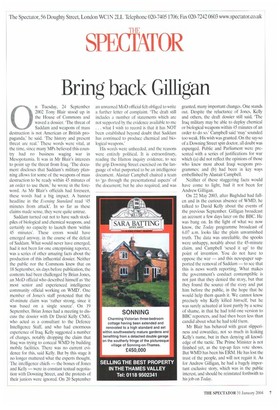 0 n Tuesday, 24 September 2002 Tony Blair stood up in the House of Commons and waved a dossier. 'The threat of Saddam and weapons of mass destruction is not American or British propaganda,' he said. 'The history and present threat are real.' These words were vital, at the time, since many MPs believed this country had no business waging war in Mesopotamia. It was in Mr 13lair's interests to point up the threat from Iraq. 'The document discloses that Saddam's military planning allows for some of the weapons of mass destruction to be ready within 45 minutes of an order to use them,' he wrote in the foreword. As Mr Blair's officials had foreseen, these words had a big impact. A banner headline in the Evening Standard read '45 minutes from attack'. In so far as these claims made sense, they were quite untrue.

Saddam turned out not to have such stockpiles of biological and chemical weapons, and certainly no capacity to launch them 'within 45 minutes'. These errors would have emerged anyway, in the course of the defeat of Saddam. What would never have emerged, had it not been for one enterprising reporter, was a series of other amazing facts about the production of this influential dossier. Neither the public nor the Commons knew that on 18 September, six days before publication, the contents had been challenged by Brian Jones. an MoD official who described himself as 'the most senior and experienced intelligence community official working on WMD'. One member of Jones's staff protested that the 45-minute claim was 'rather strong, since it was based on a single source'. On 19 September, Brian Jones had a meeting to discuss the dossier with Dr David Kelly CMG, who acted as a consultant to the Defence Intelligence Staff, and who had enormous experience of Iraq. Kelly suggested a number of changes, notably dropping the claim that Iraq was trying to conceal WMD by building mobile facilities. There was no current evidence for this, said Kelly. But by this stage it no longer mattered what the experts thought. The intelligence chiefs — the bosses of Jones and Kelly — were in constant textual negotiation with Downing Street, and the protests of their juniors were ignored. On 20 September an unnamed MoD official felt obliged to write a further letter of complaint. 'The draft still includes a number of statements which are not supported by the evidence available to me . what I wish to record is that it has NOT been established beyond doubt that Saddam has continued to produce chemical and biological weapons.'

His words were unheeded, and the reasons were entirely political. It is extraordinary, reading the Hutton inquiry evidence, to see the grip Downing Street exercised on the language of what purported to be an intelligence document. Alastair Campbell chaired a team to 'go through the presentational aspects' of the document; hut he also required, and was granted, many important changes. One stands out. Despite the reluctance of Jones, Kelly and others, the draft dossier still said, 'The Iraq military may be able to deploy chemical or biological weapons within 45 minutes of an order to do so.' Campbell said 'may' sounded too weak, His wish was granted. On the say-so of a Downing Street spin doctor, all doubt was expunged. Public and Parliament were presented with a series of justifications for war which (a) did not reflect the opinions of those who knew most about Iraqi weapons programmes; and (b) had been in key ways embellished by Alastair Campbell.

Neither of these staggering facts would have come to light, had it not been for Andrew Gilligan.

On 22 May 2003, after Baghdad had fallen and in the curious absence of WMD, he talked to David Kelly about the events of the previous September. Gilligan broadcast an account a few days later on the BBC. He was bang on. In the light of what we now know, the Today programme broadcast of 6.07 a.m. looks like the plain unvarnished truth. The data was unreliable, the spooks were unhappy, notably about the 45-minute claim, and Campbell 'sexed it up' to the point of invention. You do not have to oppose the war — and this newspaper supported the removal of Saddam -to see that this is news worth reporting. What makes the government's conduct contemptible is not just that they denied the story, but that they found the source of the story and put him before the public, in the hope that he would help them quash it. We cannot know precisely why Kelly killed himself, but he was surely actuated at least partly by a sense of shame, in that he had told one version to BBC reporters, and had then been less than candid about what he had told them.

Mr Blair has behaved with great slipperiness and cowardice, not so much in leaking Kelly's name, but in then denying all knowledge of the tactic. The Prime Minister is not finished yet, as the top-up fees vote shows. But WMD has been his ERM. He has lost the trust of the people, and will not regain it. As for Andrew Gilligan, he had a hugely important exclusive story, which was in the public interest, and should be reinstated forthwith to his job on Today. .