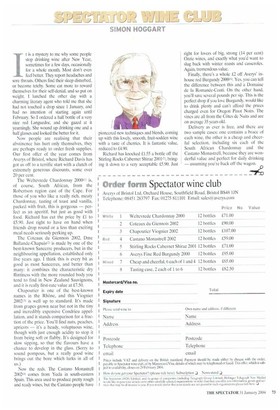 1 t is a mystery to me why some people

stop drinking wine after New Year, sometimes for a few days, occasionally for a whole month. Most don't even feel better. They report headaches and sore throats. Others find their sleep disturbed,

or become tetchy. Some eat more to reward themselves for their self-denial, and so put on weight. I lunched the other day with a charming literary agent who told me that she had not touched a drop since 1 January, and had no intention of starting again until February. So I ordered a half bottle of a very nice red Languedoc, and she gazed at it yearningly. She wound up drinking one and a half glasses and looked the better for it.

Now people are realising that their abstinence has hurt only themselves, they are perhaps ready to order fresh supplies. Our first offer of the year comes from Averys of Bristol, where Richard Davis has got us off to a terrific start with a clutch of extremely generous discounts, some over 20 per cent.

The Weltevrede Chardonnay 2000(1) is, of course, South African, from the Robertson region east of the Cape. For those of you who like a really rich. meaty Chardonnay, tasting of toast and vanilla, packed with fruit, this is gorgeous — perfect as an aperitif, but just as good with food. Richard has cut the price by £1 to £5.90. Just right to have on hand when friends drop round or a less than exciting meal needs seriously perking up.

The Coteaux du Giennois 2002, Dme Ballande-Chapuis(2) is made by one of the best-known Sancerre producers, but in the neighbouring appellation, established only five years ago. I think this is every bit as good as most Sancerres, and better than many: it combines the characteristic dry flintiness with the more rounded body you tend to find in New Zealand Sauvignons, and it is really first-rate value at £7.50.

Chapoutier is one of the best-known names in the Rhone, and this Viognier 20020) is well up to standard. It's made from grapes grown near but not in the tiny and incredibly expensive Condrieu appellation, and it stands comparison for a fraction of the price. You'll find nuts, peaches, apricots — it's a heady, voluptuous wine, though with just enough acidity to stop it from being soft or flabby. It's designed for slow sipping, so that the flavours have a chance to develop in the glass. (Sorry to sound pompous, but a really good wine brings out the bore which lurks in all of us.)

Now the reds. The Castano Monastrell 2002(4) comes from Yecla in south-eastern Spain. This area used to produce pretty rough and ready wines, but the Castano people have

pioneered new techniques and blends, coming up with this lovely, smooth, fruit-sodden wine with a taste of cherries. It is fantastic value, reduced to £4.90.

right for lovers of big, strong (14 per cent) Ozzie wines, and exactly what you'd want to slug back with winter roasts and casseroles. Again, tremendous value.

Finally, there's a whole £2 off Averys' inhouse red Burgundy 2000N. Yes, you can tell the difference between this and a Domaine de la Romanee-Conti. On the other hand, you'll save several pounds per sip. This is the perfect drop if you love Burgundy, would like to drink plenty and can't afford the prices charged even for Oregon Pinot Noirs. The vines are all from the COtes de Nuits and are on average 35 years old.

Delivery as ever is free, and there are two sample cases: one contains a brace of each wine, the other is a cheap and cheerful selection, including six each of the South African Chardonnay and the Castano Monastrell, because they are wonderful value and perfect for daily drinking — assuming you're back off the wagon.