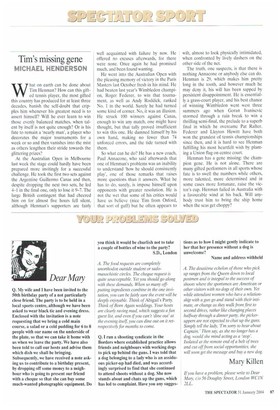 Q. I run a shooting syndicate in the Borders where

established practice allows friends and neighbours with working dogs to pick up behind the guns. I was told that a dog belonging to a lady who is an assiduous picker-up had died, and was accordingly surprised to find that she continued to attend shoots without a dog. She now stands about and chats up the guns, which has led to complaint. Have you any sugges tions as to how I might gently indicate to her that her presence without a dog is unwelcome?

Name and address withheld A. The deuxieme echelon of those who pick up ranges from the Queen down to local postmen and is integral to the success of shoots where the sportsmen are American or other visitors with no dogs of their own. Yet while attendant women who have a relationship with a gun go and stand with their intimate, or change as they walk from first to second drives, rather like changing places halfway through a dinner party, the pickeruppers are not expected to chat up the guns. Simply tell the lady, 'I'm sony to hear about Captain.' Then say, as she no longer has a dog, would she mind acting as a 'stop'. Isolated at the remote end of a belt of trees and cut off from social opportunities, she will soon get the message and buy a new dog.

If you have a problem, please write to Dear Maly, clo 56 Doughty Street, London WC1 2LL.