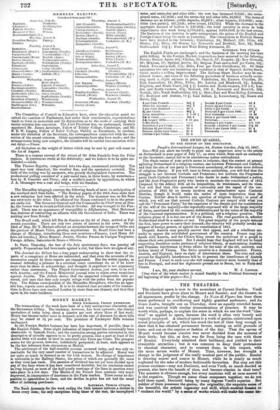 Page 12, 31 July 1847 — The Marseilles telegraph conveys the following heads of news in
Close

The Marseilles telegraph conveys the following heads of news in

anticipation of the overland mail from India. "The Bombay papers of the 29th Jane state that a new reduction had been effected in the army. The Goomsor was on fire from one extremity to the other. The affairs of the Nizam continued to be in the great- est confusion. The Governor-General and the Commander-in-Chief were at Sim- la; the former was to return to Calcutta in October. All was tranquil in the Pun- jaub. There was an appearance of tranquillity in Affghanistan. Dost Mahomed was desirous of contracting an alliance with the Government of India. There was nothing new from Scinde.

The Brazil mail, which left Rio de Janeiro on the 3d of June, arrived at Fal- mouth yesterday. There are only two points of interest in the news. On the 16th of May, Sir T.- Herbert effected an armistice between the troops of Oribe and the garrison of Monte Video, pending .negotiations. In Brazil there had been a change of Ministry, introducing these new members—Finance, (and Home Af- fairs ad interim,) Alves Branco; Justice, Nicola° Pernra de Campas Verginero; Foreign Affairs, Saturnia° de Souza e Oliveira.

In. Paris, Thursday, the last of the July anniversary days, was passing off quietly. Preparations had been made against a riot, but there were no signs of any.

The Journal des Di bats has a long_p,per endeavouring to show that the re- ports of a conspiracy at Rome are unfounded, and that even the accounts of the commotion caused by those reports are exaggerated. But the writer speaks, as counsel defending a prisoner in a criminal court sometimes do, as if he knew more than he chose to acknowledge, and thought it expedient to use arguments rather than statements. The French Government desires, just now, to be well with Austria; and the French Ministerial journal tries to argue away suspicions against Austria. The Debate denies that the suspected conspirators were ar- rested, and says that they only sought refuge with the police from the popular fury. The Roman correspondent of the Marseilles Semaphore, who has an oppo- site bias, reports more arrests. It is to be observed that accounts of the transac- tions lir-Rome have now reached London by more than one channel, and that they agree in the main incidents.