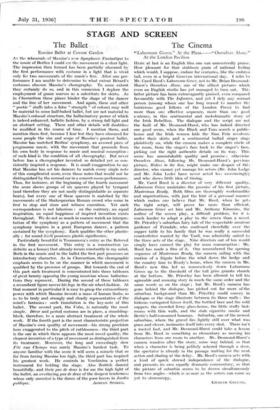 The Cinema HERE at last is an English film one

can unreservedly praise. How pleasant for that stubborn grain of national feeling which would, I suppose, endure for centuries, like the embryo tail, even in a bright Genevan international day. I refer to Mr. Carol Reed's Laburnum Grove, not to Mr. Brian Desmond- Hurst's Ourselves Alone, one of the silliest pictures which even an English studio has yet managed to turn out. This; latter picture has been extravagantly praised, even compared favourably with The Informer, and yet I defy any normal person (among whom one has long ceased to number the boisterous good fellows of the London Press) to find more than one effective sequence, more than one goad sentence, in this sentimental and melodramatic story of the Irish Rebellion. The dialogue and the script are not the fault of Mr. Desmond-Hurst, who has indeed directed one good scene, when the Black and Tans search a public- house and the Irish women hide the Sinn Fein revolver.; under their skirts and a sentimental ballad singer sings plaintively on, while the camera makes a complete circle of the room, from the singer's face back to the singer's face, picking out the right authentic details on its way. This scene has unmistakable quality and promise ; otherwise Ourselves Alone, following Mr. Desmond-Hurst's previous picture, Riders to the Sea, might make one despair of thi director, who cannot yet manage his actors (Mr. John Lodge and Mr. John Loder have never acted less convincingly) and who shows little idea of timing.

Mr. Carol Reed is a director of very different quality. Laburnum Grove maintains the promise of his first picture, Masterman Ready. Both films are thoroughly workmanlike and unpretentious, with just the hint of a personal manner which makes one believe that Mr. Reed, when he gets the right script, will prove far more than efficient. Laburnum Grove set him and Mr. Anthony Kimmins, the author of the screen play, a difficult problem, for it is much harder to adapt a play to the screen than a novel. Mr. Priestley's suburban fairy tale of the respectable amateur gardener of Ferndale, who confessed cheerfully over the supper table to his family that he was really a successful counterfeiter wanted by the Yard, was admirably suited to the three acts of the stage., Nine directors out of ten would simply have canned the play for mass consumption : Mr. Reed has made a film of it. One remembered the opening sequence of Masterman Ready, the camera sailing with the motion of a frigate before the wind down the hedge and the country lane to Ready's home, when the camera in Mr. Reed's new film led us remorselessly down Laburnum Grove up to the threshold of the tall grim granite church at the bottom. Mr. Priestley has been allowed to tell his agreeable and amusing story in much the same order and the same words as on the stage ; but Mr. Reed's camera has gone behind the dialogue, has picked out far more of the suburban background than Mr. Priestley could convey in dialogue or the stage illustrate between its three walls : the hideous variegated Grove itself, the bottled beer and the cold suppers, the crowded ferny glass-house, the little stuffy bed- rooms with thin walls, and the stale cigarette smoke and Bertie's half-consumed bananas. Suburbia, one of the newest suburbias, where the gravel lies lightly still over what was grass and clover, insinuates itself into every shot. There isn't a wasted foot, and Mr. Desmond-Hurst could take a lesson from Mr. Reed in something as elementary as moving his characters from one room to another. Mr. Desmond-Hurst's camera wanders after the story, some way behind, so that when a character is being politely ushered through a door, the spectator is already in the passage waiting for the next action and chafing at the delay. Mr. Reed's camera acts with a kind of quick shrewd .independence of the dialogue, and presents its own equally dramatic commentary, so that the picture of suburbia seems to be drawn simultaneously from two angles—which is as near as the screen can come as yet to, stereoscopy.