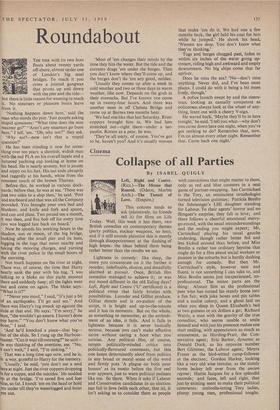 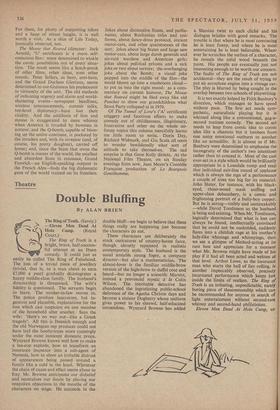 Collapse of all Parties

By ISABEL QUIGLY Left, Right and Centre. (Ritz.)—The Mouse that Roared. (Odeon, Marble Arch.)—The Tunnel of Love. (Empire.) This column tends to ask (plaintively, its friends tell it) for films on Life Today. Well, this week it has them, two British comedies on contemporary themes (party politics, nuclear weapons, no less), and if it still sounds plaintive this is mostly through disappointment at the dashing of high hopes: the ideas behind them being rather better than the results we see.

Lightness in comedy: like sleep, the more you concentrate on it the further it recedes; indefinable, elusive, and dreadfully alarmed at pursuit. Once, British film comedies managed to achieve it; or was our mood different in the old Ealing days? Left, Right and Centre (`U' certificate) is a political romp that fairly bristles with possibilities. Launder and Gilliat produce, Gilliat directs and is co-author of the script, it is bright and up-to-the-minute and it has its moments. But on the whole, as something to remember, as the embodi- ment of an idea, it fails. And it fails in lightness because it is never basically serious, because you can't make effective satire without caring a hoot what you satirise. Any political film, of course, tempts politically-minded critics into politically-flavoured comments, but this one keeps determinedly aloof from politics in any broad or moral sense of the word and firmly puts 'A plague on both your houses' as its motto before the first reel ever appears, just to warn political pedants like me. So there. When it asks if Labour and Conservative candidates in an election can fall in love (with each other, that is), it isn't asking us to consider them as people with convictions that might matter to them, only as red and blue counters in a neat game of partner-swapping. Ian Carmichael is the Tory, an omniscient ornithologist turned television quizman; Patricia Bredin the fishmonger's LSE daughter standing for Labour. To their agents' horror and no filmgoer's surprise, they fall in love; and there follows a cheerful emotional merry- go-round, with the usual misunderstandings and the ending you might expect; Mr. Carmichael playing his usual gauche underdog, though rather better fed and less kicked around than before, and Miss Bredin a rather too ordinary heroine that might do for a film about social workers or passion in the suburbs but is hardly dashing enough for comedy. But then Mr. Carmichael's style, however neat and fluent, is not something I can take to, and Miss Brcdin seems just inexperienced, un- professional. The minor parts are the thing: Alistair Sim as the professional peer who has turned his stately home into a fun fair, with juke boxes and pin tables and a nudist colony, and a ghost laid on when you sleep in Queen Elizabeth's bed at two guineas or six dollars a go; Richard Wattis, a man with the gravity of the true comedian, who seems unable to smile himself and with just his presence makes one start smiling, with appreciation as much as amusement, as Harding-Pratt, the Con- servative agent; Eric Barker, dynamic as Donald Duck, as his opposite number Bert Glimmer, the Labour agent; Moyra Fraser as the bird-wittcd camp-follower at the election; Gordon Harker, looking like a very old wise tortoise, as the stately home lackey left over from the ancien regime; Hattie Jacques for a few splendid seconds; and faces, left and right, that just by existing seem to make their political comments: umbrella-toting Tory ladies, plump young men, professional toughs.

For them, for plenty of supporting talent and a heap of minor laughs, it is well worth a visit. As a slice of Life Today, ironically observed, not.

The Mouse that Roared (director: Jack Arnold; 'U' certificate) is a more self- conscious film: more determined to winkle the comic possibilities out of every situa- tion. The result seems like a hotch-potch of other films, other ideas, even other moods. Peter Sellers, as hero, anti-hero, and the Grand Duchess Gloriana, seems determined to out-Guinness his predecessor in virtuosity of the sort. The old methods of indicating urgency and alarm and world- shattering events—newspaper headlines, wireless announcements, summit talks, top-level diplomacy—have lost their vitality. And the antithesis of lion and mouse is exaggerated to mere whimsy when America is invaded by bowmen in armour, and the Q-bomb, capable of blow- ing up the entire continent, is pocketed by the invaders and, with its inventor (and, of course, his pretty daughter), carried off home; and, since the State that owns the Q-bomb is master of the world, the smallest and absurdest State in existence, Grand Fenwick—an English-speaking outpost in the French Alps—finds the big diplomatic guns of the world trained on its frontiers. Jokes about diminutive States, and parlia- ments, about Ruritanian titles and uni- forms, about fancy-dress protocol, ancient motor-cars, and other quaintnesses of the sort; jokes about big States and large new motor-cars, about large dumb generals and air-raid wardens and American girls; jokes about political prisons and a sick joke or two about torture; the overhanging joke about the Bomb; a visual joke popped into the middle of the film—the world blown up into a mushroom cloud— to put us into the right mood: as a com- mentary on current humour, The Mouse that Roared might be filed away like old Punches to show our grandchildren what Stout Party collapsed at in 1959.

Of The Tunnel of Love's ('A' certificate) sniggery and facetious efforts to make comedy out of childlessness, illegitimacy, frustration and other on the whole un- funny topics this column mercifully leaves me little room to write. Doris Day, Richard Widmark, and Gia Scala all seem to wonder bewilderedly what sort of attitude to take themselves. The sad surprise is that Gene Kelly directs. At the National Film Theatre, on six Sunday evenings from now, Jean Meyer's Comedie Francaise production of Le Bourgeois Gentilhomme.