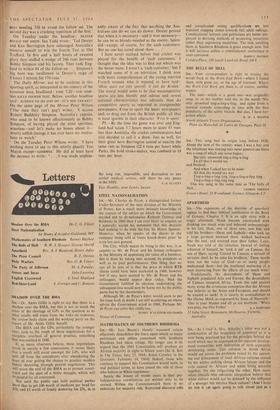 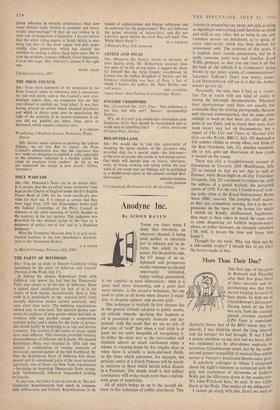 SIR,—As I read it, Mrs. Atherley's letter was not a

condonation of the brutalities of apartheid as it is now being practised but for the principle behind the word which may be expressed as the separate develop- ment compatible with federation of such separately developing states. This solution in South Africa would cut across the problems raised by the uproot- ing and debasement of local African cultures caused by the whites seeking cheap African labour and the evils caused by African and white living uneasily together, the one vulgarising the other, How many white-liberals who advocate integration believe that white culture would not be debased by the influence of a stronger but inferior black culture? (And I hope no one is yet again going to talk about jazz as a

prime influence in western civilisation.) And how many liberals really believe in complete and unres- tricted inter-marriage? If they do not believe in it, their talk of integration is hypocrisy. I do not believe that the white ruling regime in South Africa is any- thing but that of the most vulgar and dull upper middle class plutocracy which has created the problem by seeking a cheap black helot class. But to cure the problem, however difficult, if not impossible, it is at this stage, Mrs. Atherley's answer is the right one,