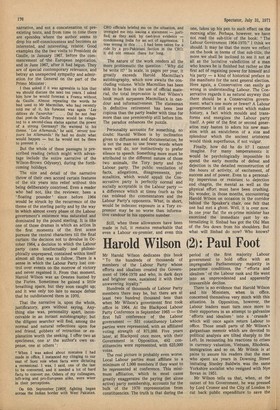 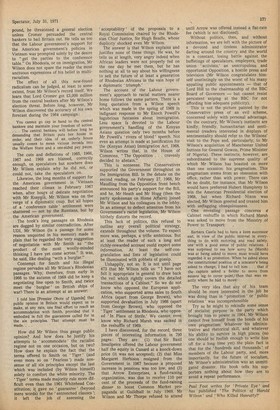 Mr Harold Wilson dedicates this book "To the hundreds of thousands of members of the Labour Party whose efforts and idealism created the Government of 1964-1970 and who, in dark days and brighter ones, sustained it with their unwavering loyalty."

Hundreds of thousands of Labour Party members there may be, but there are at least two hundred thousand less than when Mr Wilson's government first took office in 1964. At the Blackpool Labour Party Conference in September 1965 — the first full conference of the Labour government — 531 constituency Labour parties were represented, with an affiliated voting strength of 871,000. Five years later, at Blackpool once more, with their Government in Opposition, 492 constituencies were represented, with 625,000 votes.

The real picture is probably even worse. Local Labour parties must affiliate to a minimum of 1,000 members if they want to be represented at conference. This minimum affiliation, which in most cases greatly exaggerates the paying (let alone active) party membership, accounts for the bulk of the 1970 representation from constituencies. The truth is that during the period of the first majority Labour government to hold office with an impregnable Parliamentary majority in peacetime conditions, the "efforts and idealism' of the Labour rank and file went into an unprecedented and apparently irreversible decline.

There is no evidence that Harold Wilson and his Ministers, when in office, concerned themselves very much with this situation. In Opposition, however, the Labour leaders must turn once more to their supporters in an attempt to galvanize 'efforts and idealism' into a ' crusade ' which will once again return Labour to office. Those small parts of Mr Wilson's gargantuan memoir which are devoted to political analysis are tilted sharply to the Left. In recounting his reactions to crises in currency valuation, Vietnam, Rhodesia, immigration and so on, Mr Wilson is at pains to assure his readers that the man who spent six years in Downing Street imitating Stanley Baldwin was the same Yorkshire socialist who resigned with Nye Bevan in 1951.

Mr Wilson tells us that, when, at the outset of his Government, he was pressed by Lord Cromer and the City of London to cut back public expenditure to save the pound, he threatened a general election unless Cromer persuaded the central bankers to bail Britain out. He tells us too that the Labour government's support for the American government's policies in Vietnam was prompted solely by the desire to "get the parties to the conference table." On Rhodesia, or on immigration, Mr Wilson does not spare the reader the most unctuous expressions of his belief in multiracialism.

The effect of all this new-found radicalism can be judged, at least to some extent, from Mr Wilson's record itself. We learn that Lord Cromer got £3,000 million from the central bankers after Mr Wilson's election threat. Before long, however, Mr Wilson discovered the accuracy of his own forecast during the 1964 campaign :

You cannot go cap in hand to the central bankers and maintain your freedom of action. . . . The central bankers will before long be demanding that Britain puts her house in order, and their idea of an orderly house usually comes to mean vicious inroads into the Welfare State and a one-sided pay pause.

The cuts and deflations of 1965, 1966, 1967 and 1968 are blamed, correctly enough, on speculators but nowhere does Mr Wilson explain why he did not, or could not, take the speculators on.

Likewise, the long months of support for the American government in 'Vietnam reached their climax in February 1967 when, after hours of delicate negotiation with Mr Kosygin, Mr Wilson was on the verge of a diplomatic coup. But all hopes of a ' conference table' settlement were shattered — not by the Russians, but by the American government.

The book's long passages on Rhodesia are dogged by similar contradiction. After UDI, Mr Wilson (in a passage for some reason unquoted in his memoir) made it plain that he regarded the very suggestion of negotiation with Mr Smith as "the product of the most woolly-minded thinking I have yet come 'across." It was, he said, like dealing "with a burglar." Contempt for Smith and his illegal regime pervades all Mr Wilson's Rhodesian passages. Why, therefore, from early in 1966 to the autumn of 1968 did he keep a negotiating line open to Smith, and twice meet the ' burglar ' on British ships of war? There is an attempt at an answer:

I told him [Premier Obote of Uganda3 that public opinion in Britain would expect us to make, at any rate, one final effort to reach an accommodation with Smith, provided that it embodied in full the guarantees called for in the six principles. That attempt must be made. . .

How did Mr Wilson thus gauge public opinion? And how does he justify his attempts to 'accommodate ' the racialist regime not on one occasion, but on two? How does he explain the fact that the terms offered to Smith on 'Tiger' (and even more so on ' Fearless ') made nonsense of all six principles except the last which was included (by Wilson himself) solely to comfort the white minority. The '

Tiger' terms made majority rule more difficult even than the 1961 Whitehead Constitution; it gave no ' guarantee ' (beyond mere words) for the 'entrenched clauses '; it left the job of assessing the ' acceptability' of the proposals to a Royal Commission chaired by the Rhodesian Chief Justice, Sir Hugh Beadle, whose duplicity shocked even Mr Wilson.

The answer is that Wilson explains and justifies none of these things. He was, he tells us at length, very angry indeed when African leaders were not properly fed on the one day he met them, but he has nothing at all to say about his willingness to sell the future of at least a generation of Rhodesian Africans in the vain hope of a diplomatic 'triumph.'

The account of the Labour government's approach to racial matters nearer home follows the same pattern. There is a long quotation from a Wilson speech which was made in the spring of 1968 in indignant response to Mr Enoch Powell's lugubrious fantasies about immigration. Less space is devoted to the Labour government's handling of the Kenyan Asians question only two months before Mr Powell's rivers of blood' speech. Not even an attempt is made at justification for the (Kenyan Asian) Immigration Act, 1968. Wilson writes that, in the House of Commons, "The Opposition . . . cravenly decided to abstain."

This is nonsense. The Conservatives supported the Government throughout on the Immigration Bill. In the debate on the second reading, on February 27, 1968, Mr Maudling from the Opposition front bench announced his party's support for the Bill, and he, Mr Heath and Mr Hogg (then the party spokesman on Home Affairs) joined Mr Wilson and his colleagues in the lobby. In an attempt to deflect attention from his Government's racist legislation, Mr Wilson blithely distorts the record.

This lack of politics, this refusal to outline any overall political strategy, extends throughout the volume. To expect more was, perhaps, a trifle ambitious. But at least the reader of such a long and richly-rewarded account could expect some information. At least the self-congratulation and lists of legislation could be illuminated with gobbets of gossip.

Unhappily, not so. It is not until page 473 that Mr Wilson tells us: "I have not felt it appropriate in general to draw back the veil which rightly covers the detailed transactions of a Cabinet." So we do not know who opposed the European application, who supported arms sales to South Africa (apart from George Brown), who supported devaluation in July 1966 (apart from George Brown), who opposed the ' Tiger ' settlement in Rhodesia, who opposed 'In Place of Strife.' We cannot even know why Richard Marsh was sacked in the reshuffle of 1969.

I have discovered, for the record, three pieces of interesting information in 790 pages : They are : (1) that Sir Basil Smallpeice offered the Labour government half the equity in Cunard at a knock-down price (it was not accepted); (2) that Miss Margaret Herbison resigned from the Government in 1967 because a proposed increase in pensions was too low, and (3) that Arrow Enterprises, a fund-raising organization, was due to receive 110 per cent of the proceeds of the fund-raising dinner to boost Common Market propaganda at Guildhall in July 1969. Mr Wilson and Mr Thorpe refused to attend until Arrow was offered instead a flat-rate fee (which is not disclosed).

Without politics, then, and without information, we are left with the picture of a devoted and tireless administrator darting around the country and the world in a constant, losing battle against the buffetings of speculators, employers, trade union ' activists,' an unscrupulous and opportunist Opposition, a hostile press and television (Mr Wilson congratulates himself unstintingly on the worst of his many appalling public appointments — that of Lord Hill to the chairmanship of the BBC Board of Governors — but cannot resist persistent sniping at the BBC for not affording him adequate publicity).

This is not the picture painted by the Conservative press of an evil scheme, concerned solely with personal advantage. On the contrary, Mr Wilson's instincts are kindly, friendly, humanitarian and sentimental (readers interested in displays of sentimentality should refer to the Wilsons' visit to the Pope and, particularly, to Mr Wilson's acquisition of Manchester United buttons for General Gowon, Prime Minister of Nigeria). These instincts, however, are subordinated to the supreme quality of which Mr Wilson has boasted on more than one occasion: his pragmatism. This pragmatism stems from an obsession with office, rather than with power. There can be no doubt, for instance, that Mr Wilson would have preferred Hubert Humphrey to win the American Presidential election of 1968, but when Richard Nixon was elected, Mr Wilson greeted and treated him with unflagging obsequiousness.

Barbara Castle had to have a keen successor and, in view of the public interest in everything to do with motoring and road safety, one I with a good sense of public relations. I was surprised to see how sorry he (Marsh) was at being asked to move; most would have regarded it as promotion. When he asked about the constitutional position of a minister's being asked to change, I had to tell him . . that if the captain asked a fielder to move from square leg to cover point-'then that was exactly where he had to move: The very idea that any of his team should be more interested in the job he was doing than in ' promotion ' or 'public relations' was incomprehensible Try as he might to rekindle some sense of socialist purpose in the party which brought him to power in 1964, Mr Wilson cannot free himself from the bonds of his own pragmatism. Whatever his administrative and rhetorical skill, and whatever his ability to survive in high places (no one should be foolish enough to write him oft for a long time yet) the plain fact is that for the hundreds and thousands' of members of the Labour party, and, more importantly, for the future of socialism, Mr Wilson's administration was an unmiti gated disaster. His book tells his supporters nothing about how they are to avoid a repeat performance.

Paul Foot writes for Private Eye' and has published The Politics of Harold Wilson ' and ' Who Killed Hanrattv?'