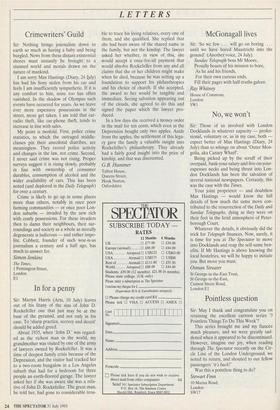 Sir: Nothing brings journalists down to earth so much as having a baby and being burgled. News from these distant existential shores must instantly be brought to a stunned world and morals drawn on the nature of mankind.

I am sorry Max Hastings (Diary, 24 July) has had his Sony stolen from his car and feels I am insufficiently sympathetic. If it is any comfort to him, mine too has often vanished. In the shadow of Olympus such events have occurred for years. As we leave ever more expensive possessions in the street, more get taken. I am told that car- radio theft, like car-phone theft, tends to increase in line with sales.

My point is twofold. First, police crime statistics, to which the outraged middle- classes pin their anecdotal diatribes, are meaningless. They record police activity and changes in the law, not crime. Second, I never said crime was not rising. Proper surveys suggest it is rising slowly, probably in line with ownership of consumer durables, consumption of alcohol and the wider availability of cars. This has been noted (and deplored in the Daily Telegraph) for over a century.

Crime is likely to go up in some places more than others, notably in once poor farming communities — or once poor Lon- don suburbs — invaded by the new rich with costly possessions. For these invaders then to damn their neighbours, their sur- roundings and society as a whole as morally degenerate is ludicrous — and rather impo- lite. Cobbett, founder of such woe-is-us journalism a century and a half ago, has much to answer for.