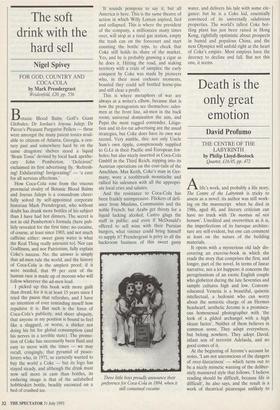 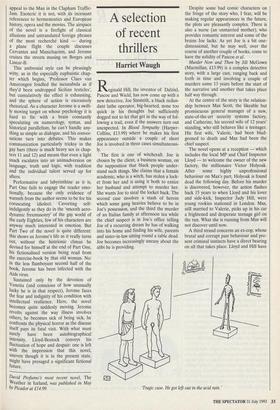 Death is the only great emotion

THE CENTRE OF THE LABYRINTH by Philip Lloyd-Bostock Quartet, £16.95, pp. 472 Alife's work, and probably a life story, The Centre of the Labyrinth is tricky to assess as a novel: its author was still work- ing on the manuscript when he died in 1986, aged 40, and literary criticism can have no truck with 'De mortuis nil nisi bonum'. Unedited and overwritten as it is, the imperfections of its baroque architec- ture are self-evident, but one can comment at least on the nature of the building materials.

It opens with a mysterious old lady dis- covering an exercise-book in which she reads the story that comprises the first, and longer, part of the novel. In terms of linear narrative, not a lot happens: it concerns the peregrinations of an exotic English couple who globetrot during the late Seventies and sample cultures high and low. Convent- educated Venetia is a beautiful, quixotic intellectual, a hedonist who can worry about the semiotic charge of an Hermes headscarf; aesthetic Jerome is a promiscu- ous homosexual photographer with 'the look of a gilded archangel with a high sleaze factor'. Neither of them believes in common sense. They adapt everywhere, but belong nowhere. They adopt David, infant son of terrorist Adelaida, and no good comes of it.

At the beginning of Jerome's account he notes, 'I am not unconscious of the dangers of over-literariness' — which turns out to be a nicely mimetic warning of the deliber- ately mannered style that follows. 'I believe reading should be difficult, because life is difficult', he also says, and the result is a work of theatrical picaresque unlikely to appeal to the Man in the Clapham Traffic- Jam. Exoteric it is not, with its incessant references to hermeneutics and European history, opera and the movies. The airspace of the novel is a firefight of classical allusions and untranslated foreign phrases of the most recherché kind — during a plane flight the couple discusses Cervantes and Manichaeism, and Jerome cruises the streets musing on Borges and Linear-B.

This ambrosial style can be pleasingly witty, as in the especially euphuistic chap- ter which begins, 'Professor Claes van Amerongen fondled the incunabula as if they'd been undropped Sicilian testicles', but cumulatively the effect is exhausting, and the sphere of action is excessively rhetorical. M a character Jerome is a swift- ly moving target on whose psychology it is hard to fix: with a brain constantly speculating on numerology, syntax, and historical parallelism, he can't handle any- thing as simple as dialogue, and his conver- sations turn into debates. This makes communication particularly tricksy in the gay bars (there is much heavy sex in chap- ters 11 and 12) and means that even a light snack escalates into an animadversion on language, truth and logic, with tradition and the individual talent served up for afters.

Performative and labyrinthine as it is, Part One fails to engage the reader emo- tionally, because the only evidence of warmth from the author seems to be for his coruscating idiolect. Cavorting self- indulgently as they do in the 'smooth aero- dynamic freemasonry' of the gay world of the early Eighties, few of his characters are anyway much interested in emotion. But Part Two of the novel is quite different: this shows us Jerome's life as it really turns out, without the histrionic climax he devised for himself at the end of Part One, his fictionalised version being read from the exercise-book by that old woman. No: in the less flamboyant second half of the book, Jerome has been infected with the Aids virus.

Sustained only by the devotion of Venetia (and conscious of how unusually lucky he is in that respect), Jerome faces the fear and indignity of his condition with intellectual resilience. Here, the novel becomes quite suddenly moving. Jerome revolts against the way illness involves others, he becomes sick of being sick, he confronts the physical horror as the disease itself pays its fatal visit. With what must surely have been autobiographical intensity, Lloyd-Bostock conveys his fluctuation of hope and despair: one is left with the impression that this novel, uneven though it is in the present state, Might have presaged a significant fictional future.

David Profumo's most recent novel, The Weather in Iceland, was published in May by Picador at f14.99.