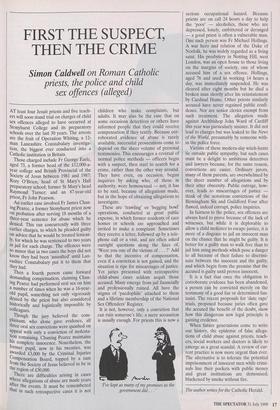 FIRST THE SUSPECT, THEN THE CRIME

AT least four Jesuit priests and five teach- ers will soon stand trial on charges of child sex offences alleged to have occurred at Stonyhurst College and its preparatory schools over the last 30 years. The arrests are the fruit of Operation Whiting, a 12- man Lancashire Constabulary investiga- tion, the biggest ever conducted into a Catholic institution in Britain.

Those charged include Fr George Earle, aged 73, a former head of the £12,000-a- year college and British Provincial of the Society of Jesus between 1981 and 1987; Rory O'Brien, head of St Mary's Hall preparatory school; former St Mary's head Raymond Turner; and an 87-year-old priest, Fr John Pearson.

An earlier case involved Fr James Chan- ing Pearce, a former Stonyhurst priest now on probation after serving 18 months of a three-year sentence for abuse which he denied. This ran concurrently with three earlier charges, to which he pleaded guilty on advice that he would be treated lenient- ly, for which he was sentenced to two years in jail for each charge. The offences were so minor that in two cases the boys did not know they had been 'assaulted' until Lan- cashire Constabulary put it to them that they had.

Then a fourth person came forward demanding compensation, claiming Chan- ing Pearce had performed oral sex on him a number of times when he was a 16-year- old pupil, something not only vigorously denied by the priest but also considered historically and logistically impossible by colleagues. Though the jury believed the com- plainant, who alone gave evidence, all three oral sex convictions were quashed on appeal with only a conviction of molesta- tion remaining. Chaning Pearce maintains his complete innocence. Nonetheless, the former pupil, now in his twenties, was awarded £3,000 by the Criminal Injuries Compensation Board, topped by a sum from the Society of Jesus believed to be in the region of £30,000. There are difficulties arising in cases where allegations of abuse are made years after the events. It must be remembered that in such retrospective cases it is not children who make complaints, but adults. It may also be the case that on some occasions detectives or others have informed people that they could receive compensation if they testify. Because cor- roborated evidence of abuse is rarely available, successful prosecutions come to depend on the sheer volume of personal testimonies. This encourages a reversal of normal police methods — officers begin with a suspect, then start to search for a crime, rather than the other way around. They have even, on occasion, begun inquiries by asking who, of those in authority, were homosexual — not, it has to be said, because of allegations made, but in the hope of obtaining allegations to investigate.

These are 'trawling' or 'begging bowl' operations, conducted at great public expense, in which former residents of care homes or schools are approached and invited to make a complaint. Sometimes they receive a letter, followed up by a tele- phone call or a visit, and are often asked outright questions along the lines of, `Were you one of the victims of . . ?' Add to that the incentive of compensation, even if a conviction is not gained, and the situation is ripe for miscarriages of justice. Yet juries presented with retrospective child-abuse cases seldom acquit those accused. Many emerge from jail financially and professionally ruined. All have the stigma of 'paedophile' attached to them and a lifetime membership of the National Sex Offenders' Register.

It is not, however, only a conviction that can ruin someone's life; a mere accusation is usually enough. For priests this is now a I've kept as many of my promises as the government did . . . ' serious occupational hazard. Because priests are on call 24 hours a day to help the 'poor' — alcoholics, those who are depressed, lonely, embittered or deranged — a good priest is often a vulnerable man. One such person was Fr Michael Hollings. A war hero and relation of the Duke of Norfolk, he was widely regarded as a living saint. His presbytery in Notting Hill, west London, was an open house to those living on the margins of society, one of whom accused him of a sex offence, Hollings, aged 76 and used to working 14 hours a day, was immediately suspended. He was cleared after eight months but he died a broken man shortly after his reinstatement by Cardinal Hume. Other priests similarly accused have never regained public confi- dence. Nor are senior clerics exempt from such treatment. The allegation made against Archbishop John Ward of Cardiff this year was particularly sinister. It did not lead to charges but was leaked to the News of the World, presumably by someone with- in the police force.

Victims of these modern-day witch-hunts lie outside public sympathy, but such cases must be a delight to ambitious detectives and lawyers because, for the same reason, convictions are easier. Ordinary jurors, many of them parents, are overwhelmed by the sheer number of allegations and by their utter obscenity. Public outrage, how- ever, leads to miscarriages of justice think of the notorious convictions of the Birmingham Six and Guildford Four after flawed, indeed corrupt, police inquiries.

In fairness to the police, sex offences are always hard to prove because of the lack of witnesses, but while it is deplorable to allow a child molester to escape justice, it is more of a disgrace to jail an innocent man on the chance that he might be guilty. It is better for a guilty man to walk free than to jail him using methods which pose a danger to all because of their failure to discrimi- nate between the innocent and the guilty, and which begin from the premise that the accused is guilty until proven innocent.

It is a fact that once the obligation to corroborate evidence has been abandoned, a person can be convicted merely on the testimony of a good liar or determined fan- tasist. The recent proposals for 'date rape' trials, proposed because juries often gave the accused the benefit of the doubt, show how this dangerous new legal principle is gaining credence.

When future generations come to write our history, the epidemic of false allega- tions of child abuse against priests, teach- ers, social workers and doctors is likely to emerge as a great scandal. A review of cur- rent practice is now more urgent than ever. The alternative is to tolerate the potential imprisonment of innocent men while crimi- nals line their pockets with public money and great institutions are demonised; blackened by smoke without fire.

The author writes for the Catholic Herald.