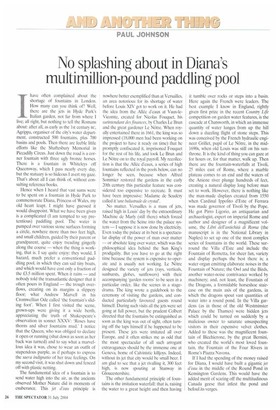 No splashing about in Diana's multimillion-pound paddling pool

Ihave often complained about the shortage of fountains in London. How many can you think of? Well, there are the jets in Hyde Park's Italian garden, not far from where I live; all right, but nothing to tell the Romans about: after all, as early as the 1st century BC, Agrippa, organiser of the city's water department, constructed 500 fountains, plus 700 basins and pools. Then there are feeble little efforts like the Shaftesbury Memorial in Piccadilly Circus. Just down the road is a corner fountain with three ugly bronze horses. There is a fountain in Whiteleys off Queensway, which I pass nearly every day, but the statuary is so hideous I avert my gaze. That's about all I can think of, without consulting reference books.

Hence when I heard that vast sums were to be spent on a fountain in Hyde Park to commemorate Diana, Princess of Wales, my old heart leapt. I might have guessed it would disappoint. What we have been given is a complicated (I am tempted to say pretentious) paddling pool. The water is pumped over various stone surfaces forming a circle, nowhere more than two feet high, and small children, guided by their parent or grandparent, quite enjoy treading gingerly along the course — when the thing is working, that is. I say quite enjoy: they would, I hazard, much prefer a conventional paddling pool, in which they can sail tiny boats, and which would have cost only a fraction of the £3.5 million spent. When it rains — and nobody told the transatlantic designer that it often pours in England — the trough overflows, creating on its margins a slippery floor; what Andrew Marvell in his Cromwellian Ode called 'the fountain's sliding foot'. When I first visited the scene, grown-ups were giving it a wide berth, appreciating the truth of Shakespeare's observation in sonnet XXXV: 'Roses have thorns and silver fountains mud.' I notice that the Queen, who was obliged to declare it open or running (shut down as soon as her back was turned) and to say what a marvellous idea it was, chose to wear an outfit of stupendous purple, as if perhaps to express the saeva indignatio of her true feelings. On my second visit, it was shut down and fenced off with plastic netting.

The fundamental idea of a fountain is to send water high into the air, as the ancients observed Mother Nature did in moments of exuberance. This jet d'eau principle is

nowhere better exemplified than at Versailles, an area notorious for its shortage of water before Louis XIV got to work on it. He had the idea from the All& d'eaux at Vaux-leVicomte, created for Nicolas Fouquet, his surintendant des finances, by Charles Le Brun and the great gardener Le Notre. When royally entertained there in 1661, the king was so impressed (18,000 men had been working on the project to have it ready on time) that he promptly confiscated it. imprisoned Fouquet for the rest of his life, and took Le Brun and Le Notre on to the royal payroll. My recollection is that the All& d'eaux, a series of high fountains reflected in the pools below, can no longer be seen, because when Alfred Sommier restored the gardens in the early 20th century this particular feature was considered too expensive to recreate. It must have been impressive: Madame de Scudery called it 'une balustrade de crystal'

No matter. Versailles is a mass of jets, raised high in Louis' day by the extraordinary Machine de Marty (still there) which forced the water from the Seine into the palace system — I suppose it is now done by electricity. Even today the palace at its best is a spectacular display of the power of man over matter — or absolute king over water, which was the philosophical idea behind the Sun King's prodigality. But you have to go at the right time because the system is expensive to operate and is usually not working. Le Notre designed the variety of jets (rays, verticals, sunbursts, globes, sunflowers) with their accompanying 'garden rooms' to be seen in a particular order, like the scenes in a stagedrama. The king wrote a guidebook to the ceremony of visiting the gardens, and conducted particularly favoured guests round himself. During such visits all the jets were set going at full power, but the prudent Colbert directed that the fountains be extinguished as soon as the king was out of sight, often turning off the taps himself if he happened to be present. These jets were imitated all over Europe, and it often strikes me as odd that the most spectacular of all such arrogant extravagances should be the immense one at Geneva, home of Calvinistic killjoys. Indeed, without its jet that city would be small beer. I am glad to see that a jet rivalling it, 300 feet high, is now spouting at Stanway in Gloucestershire.

The other fundamental principle of fountains is the imitation waterfall: that is, raising the water to a great height and then having it tumble over rocks or steps into a basin. Here again the French were leaders. The best example I know in England, rightly given first prize in the recent Country Life competition on garden water features, is the cascade at Chatsworth, in which an immense quantity of water lunges from up the hill down a dazzling flight of stone steps. This was conceived by the French hydraulic engineer Grillet, pupil of Le Notre, in the mid1690s, when old Louis was still on his sunthrone. It is the kind of thing you can gaze at for hours or, for that matter, walk up. Then there are the fountain-waterfalls at Tivoli, 25 miles east of Rome, where a marble plateau comes to an end and the waters of the Aniene river plunge hundreds of feet, creating a natural display long before man set to work. However, there is nothing like the man-made displays created from 1550 when Cardinal Ippolito d'Este of Ferrara was made governor of Tivoli by the Pope. He got Pirro Ligorio, an antiquarian and archaeologist, expert on imperial Rome and author and designer of a magnificent volume, the Libri dell'antichita di Roma (the manuscript is in the National library in Naples) to set up one of the most complex series of fountains in the world. These surround the Villa d'Este and include the Fountain of Rometta, for sheer fun, variety and display perhaps the best there is; a water organ emitting elaborate noises in the Fountain of Nature; the Owl and the Birds, another water-noise contrivance worked by machinery; and, not least, the Fountain of the Dragons, a formidable horseshoe staircase on the main axis of the gardens, in which the dragons spout vast quantities of water into a round pond. In the Villa gardens (as in those of the old Westminster Palace by the Thames) were hidden jets which could be turned on suddenly by a malicious owner to saturate unsuspecting visitors in their expensive velvet clothes. Added to these was the magnificent fountain of Bicchierone, by the great Bernini, who created the world's most loved fountain, the Fountain of the Four Rivers in Rome's Piazza Navona.

If I had the spending of the money raised for Diana, I would have built a gigantic jet d'eau in the middle of the Round Pond in Kensington Gardens. This would have the added merit of scaring off the multitudinous Canada geese that infest the pond and befoul its verges.