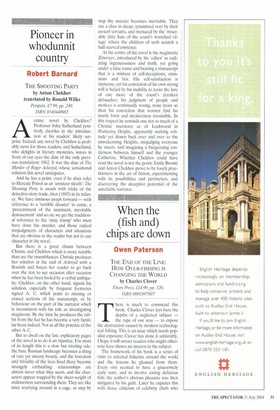 THE SHOOTING PARTY by Anton Chekhov translated by Ronald Wilks Penguin, £7.99, pp. 240, ISBN 0140448985 Acrime novel by Chekhov? Professor John Sutherland positively chortles in the introduction at his readers' likely surprise. Indeed, any novel by Chekhov is probably news for those readers, and Sutherland, who delights in literary mysteries, waves in front of our eyes the date of the only previous translation: 1962. It was the date of The Murder of Roger Ackroyd, whose sensational solution this novel anticipates. And he has a point, even if he does refer to Hercule Poirot as an 'amateur sleuth': The Shooting Party is awash with tricks of the detective-story trade, then (1885) in its infancy. We have ominous peeps forward — with reference to a 'terrible disaster' to come, a 'presentiment of the imminent, inevitable denouement' and so on; we get the traditional reference to the 'stray tramp' who must have done the murder, and those radical misjudgments of characters and situations that are obvious to the reader but not to any character in the novel.

But there is a great chasm between Christie and Chekhov which is more notable than are the resemblances. Christie produces her solution at the end of Ackroyd with a flourish and forces her reader to go back over the text to see occasion after occasion when he has been fooled by a verbal ambiguity. Chekhov, on the other hand, signals his solution, especially by frequent footnotes signed A. C. which point to missing or erased sections of the manuscript, or by behaviour on the part of the narrator which is inconsistent with his role as investigating magistrate. By the time he produces the rabbit from the hat he has become a very familiar beast indeed. Not at all the practice of the other A. C.

But to dwell on the last. explicatory pages of the novel is to do it an injustice. For most of its length this is a slow but riveting tale: the bare Russian landscape becomes a thing of rare yet uneasy beauty, and the boredom and triviality of the lives lived there become strangely enthralling: relationships are almost never what they seem, and the characters appear trapped by the sheer weight of ordinariness surrounding them. They are like mice scurrying around in a cage, as step by step the murder becomes inevitable. They are a class in decay, tyrannised over by their ex-serf servants, and menaced by the 'miserable little huts of the count's wretched village' where the children of serfs scratch a half-starved existence.

At the centre of the novel is the magistrate Zinovyev, introduced by his 'editor' as radiating ingenuousness and truth, yet going under a false name and bearing a manuscript that is a mixture of self-deceptions, omissions and lies. His self-satisfaction is immense, yet his conviction of his own strong will is belied by his inability to resist the lure of one more of the count's drunken debauches; his judgment of people and motives is continually wrong, none more so than his conviction that women find his manly form and decisiveness irresistible. In this respect he reminds one not so much of a Christie murderer as of Lockwood in Wuthen'ng Heights, apparently seeking solitude yet drawn back over and over to the unwelcoming Heights, misjudging everyone he meets, and imagining a burgeoning tenderness between himself and the younger Catherine. Whether Chekhov could have read the novel is not the point: Emily Brontë and Anton Chekhov prove to be lonely practitioners in the art of fiction, experimenting with its possibilities and perimeters, and discovering the deceptive potential of the unreliable narrator.