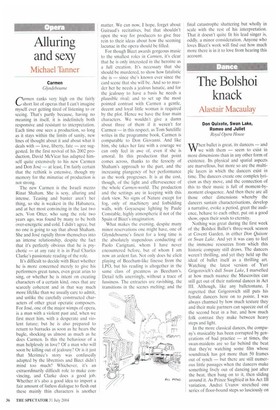 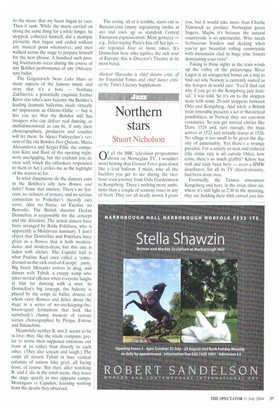 When ballet is great, its dancers — and we with them — seem to exist in more dimensions than in any other form of existence. Its physical and spatial aspects are marvellous, but more so are the multiple layers in which the dancers exist in time. The dancers create one complex lyricism as they move, and the connection of this to their music is full of moment-bymoment eloquence. And then there are all those other dimensions whereby the dancers sustain characterisations, develop a narrative, evoke a period, greet the audience, behave to each other, put on a good show, open their souls to eternity.

Nothing was great during the first week of the Bolshoi Ballet's three-week season at Covent Garden, in either Don Quixote or Swan Lake. And yet it was easy to feel the immense resources from which this historic company still draws. The dancers weren't thrilling, and yet they held up the ideal of ballet itself as a thrilling art. Watching the latest version of Yuri Grigorovich's dull Swan Lake, I marvelled at how much nuance the Muscovites can still get out of their national dances in Act III. Although, like any balletomane, I regretted that Grigorovich still puts his female dancers here on to pointe, I was always charmed by how much texture they and their male partners can squeeze out of the second beat in a bar, and how much folk contrast they make between heavy steps and light.

In the more classical dances, the company's musicality has been corrupted by generations of bad practice — at times, the swan-maidens are so far behind the beat that they're watching some film whose soundtrack has got more than 50 frames out of synch — but there are still numerous little passages when the dancers make something lively out of dancing just after the beat, then bang on to it, then sliding around it. As Prince Siegfried in his Act III variation, Andrei Uvarov stretched one series of floor-bound steps so lusciously on to the music that my heart began to race. Then it sank. While the music carried on doing the same thing for a while longer, he stopped, collected himself, did a multiple pirouette that began and ended without any musical point whatsoever, and then walked across the stage to prepare himself for the next phrase. A hundred such passing frustrations occur during the course of any Bolshoi performance of any 19th-century ballet.

The Grigorovich Swan Lake blurs so many aspects of the famous music and story that it's a bore — Svetlana Zakharova, a potentially exquisite former Kirov star who's now become the Bolshoi's leading dramatic ballerina, made virtually no impression as Odette–Odile — but it lets you see that the Bolshoi still has troupers who can deliver real dancing, as multidimensional as can be, if only their choreographers, producers and coaches will let them. In Alexei Fadeyechev's version of the old Bolshoi Don Quixote. Maria Alexandrova and Sergei Filin, the competent Kitri and Basil of the opening night, were unengaging, but the exultant joie de vivre with which the onlookers responded to them in Act I strikes me as the highlight of the season so far.

In what dimensions do the dancers exist in the Bolshoi's silly new Romeo and Juliet? None that matters. There's no lyricism, no richness of texture, and no serious connection to Prokofiev's (heavily cut) score. Also no Nurse. no Escalus, no Benvolio. The British director DecIan Donnellan is responsible for the concept and the direction. The actual dances have been arranged by Radu Poklitaru, who is apparently a Moldavian luminary. I don't object that Donnellan and Poklitaru have given us a Romeo that is both moderndance and modern-dress; but this one is laden with clichés. The Capulet ball is what Pauline Kael once called a 'comedressed-as-the-sick-soul-of-Europe' party. Big butch Mercutio arrives in drag, and dances with Tybalt, a creepy wimp who takes mortal offence when everyone laughs at him for dancing with a man. In DonneIlan's big concept, the balcony is played by the corps de ballet, dozens of whom carry Romeo and Juliet about the stage in a series of we-are-keeping-thelovers-apart formations that look like somebody's clumsy memory of various scenes choreographed by Petipa, Fokine and Balanchine.

Meanwhile neither R. nor J. seems to be in love: they, like the whole company, prefer to mime their supposed emotions out front at us rather than directly to each other. (They also scream and laugh.) The corps all mourn Tybalt in four vertical columns of unison fake grief, all facing front, of course. But then, after watching R. and J. die in the tomb scene, they leave the stage quietly in two opposite camps: Montagues vs Capulets, learning nothing from the deaths they observed. The acting, all of it terrible, starts out as Russian-cute (many ingratiating smiles at us) and ends up as standard Central European expressionism. Most gestures — e.g., Juliet wiping Paris's kiss off her lips — are repeated four or more times. It's Donnellan here who typifies the sick soul of Europe: this is Director's Theatre at its most banal.