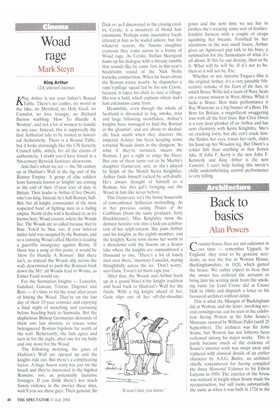 Ving Arthur is not your father's Round ./X.Table. There's no castles, no sword in the lake, no Mordred, no Holy Grail, no Camelot, no love triangle, no Richard Burton warbling 'How To Handle A Woman', and not a lot of women to handle in any case. Instead, this is supposedly the first Arthurian tale to be rooted in historical Arthenticity. There is a Round Table, but it looks alarmingly like the UN Security Council table, which, for all the claims of authenticity. I doubt you'd have found in a 5th-century Berwick furniture showroom.

And that's where we are — the 5th century up at Hadrian's Wall in the fag end of the Roman Empire. A group of elite soldiers from Sarmatia known as 'knights' are coming to the end of their 15-year tour of duty in Britain. Their leader is Arthur (Clive Owen). who's no king. Instead, he's half-Roman, halfBrit, but all knight, commander of the most respected band of fighting men in a fading empire. North of the wall is Scotland or, as it's known here, Woad country, where the Woads live. The Woads are so called because they're blue. You'd be blue, too, if your beloved native land was occupied by the Romans, and so a cunning Woad called Merlin is leading a guerrilla insurgency against Rome. If there was a song at this point, it would be 'How To Handle A Roman'. But there isn't, so instead the Woads slip across the wall, determined to push the Romans back down the Ml: all Woads lead to Wome, as Elmer Fudd would say.

For the Sarmatian knights — Lancelot, Galahad, Gawain, Tristan, Dagonet and Bors — it's time to hit the road after years of hitting the Woad. They're on the last day of their 15-year contract and enjoying a final night of wenching and carousing before heading back to Sarmatia. But the duplicitous Bishop Germanius demands of them one last mission, to rescue some beleaguered Roman bigshots far north of the wall. Reluctantly, the lads agree and turn in for the night, after one for my baby and one more for the Woad.

The following morning, the gates of Hadrian's Wall are opened up and the knights ride out. But there's a complicating factor. A huge Saxon army has just hit the beach and they're interested in the bigshot Romans, too. as potentially lucrative hostages. If you think there's too much Saxon violence in the movies these days, wait'll you see these guys. Their general, Sir Dick or, as I discovered in the closing credits, Cerdic, is a mountain of blond hair extensions. Perhaps some insensitive locals tittered at him as he waded ashore, but, for whatever reason, the Saxons slaughter everyone they come across in a frenzy of Woad rage. As Cerdic, Stellan Skarsgard hams up his dialogue with a throaty rumble that sounds like he came first in this year's Stockholm round of the Nick Nolte karaoke competition. When he hears about the Roman estate nearby, he dispatches a rape'n'pillage squad led by his son Cynric, because it takes his child to raze a village. His son is bald, which explains where dad's hair extensions came from.

Meanwhile, even though the whole of Scotland is shrouded in fog, smoke, mist and large billowing snowflakes, Arthur's knights have managed to find the Roman in the gloamin', and are about to skedaddle back south when they discover the imperial A-lister has been keeping some tortured Woads down in the dungeon. So what if they're tortured, sneers the Roman, I got a right to singe the blues. But one of them turns out to be Merlin's daughter Guinevere and, as she's played by Sylph of the Month Keira Knightley, Arthur finds himself racked by self-doubt. He's always thought of himself as a Roman, but this gal's bringing out the Woad in him like never before.

This Guinevere isn't the horny housewife of conventional Arthurian storytelling. As in her previous outing Pirates of the Caribbean (from the same producer, Jerry Bruckheimer), Miss Knightley turns the demure heroine role into a kick-ass celebration of her sylph-esteem. She joins Arthur and his knights as the eighth member, and the knightly Keira soon shows her worth in a showdown with the Saxons on a frozen lake where the knights are outnumbered a thousand to one. 'There's a lot of lonely men over there,' murmurs Lancelot, staring thoughtfully across the ice. 'Don't worry,' says Guin, 'I won't let them rape you.'

After that, the Woads and Arthur hook up in a grand blues'n'the knight coalition and head back to Hadrian's Wall for the finale. With a big knight ahead of her, Guin slips out of her off-the-shoulder gown and the next time we see her in clothes she's wearing some sort of leatherfetishist harness with a couple of straps squishing her breasts. Fortified by her attentions in the wee small hours, Arthur gives an Agincourt pep talk to his boys, a summation for the Sarmatians of what it's all about: If this be our destiny, then so be it. What will be will be. If it's not to be, then so it will not be. Etc.

Whether or not Antoine Fuqua's film is the original Arthur, it's a very passable 5thcentury remake of his Tears of the Sun, in which Bruce Willis led a team of Navy Seals on a rescue mission in West Africa. What it lacks is Bruce. Best male performance is Ray Winstone as a big bruiser of a Bors. He Bors for Britain, a magnificent swaggering lout with all the best lines. But Clive Owen is a very dour plonker of an Arthur and has zero chemistry with Keira Knightley. She's on cracking form, but she can't crack him: she flashes her eyes, tosses her curls, slides his hand up her Woaden leg. But Owen's a colder fish than anything in that frozen lake. If John F. Kerry is the new John F. Kennedy and King Arthur is the new Camelot, I can't help feeling this movie's chilly underwhelming central performance is very telling.