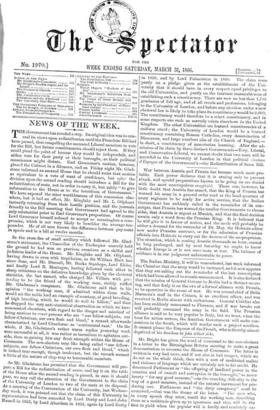 Page 1, 31 March 1866 — The Italian Ministry, it will be remembered, last week informed
Close

The Italian Ministry, it will be remembered, last week informed

the Chamber that the army would be increased, and it now appears that they are calling out the remainder of the last conscription which had been allowed to remain unsummoned. It is also declared that the mission of General Govone to Berlin had a distinct mean- ing, and that Italy is on the eve of a formal alliance with Prussia, to be operative in the event of war. He was second chief of Della Marmora's staff in the Crimea, is an excellent officer, and was received in Berlin almost with enthusiasm. General Cialdini also has been suddenly summoned to Florence, and if war breaks out will probably command the army in the field. The Prussian alliance is said to be very popular in Italy, but we trust, when the hour for action arrives, the Austrian Government will make con- cessions in the South, which will render such a project needless. It cannot please the Emperor of the French, who is thereby almost deprived of his freedom to join either side.