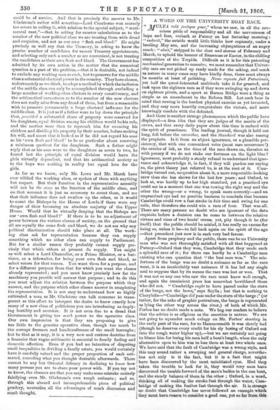 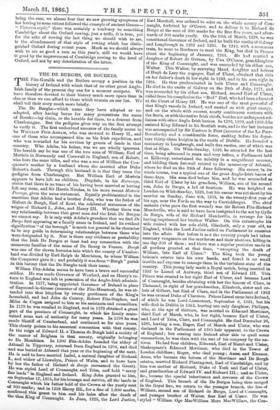 puer," whom we saw, in all the con- scious pride of responsibility turd all the nervousness of hope and fear, embark at Putney on last Saturday morning : "sudavit," the outside world little thinks bow copiously, under a broiling May sun, and the increasing objurgations of an angry coach : "absit," stripped in the sleet and atorms of February and March, to uphold the honour of Brasenose or Exeter, in the chilling competition of the Torpids. Difficult as it is for this patenting mechanical generation to conceive. we must remember that Univer- sity oars are not picked up ready made for the asking, and much as nature in many cases may have kindly done, there must always be months at least of polishing. Nenw repente fait Putneiensis,

yet half the quasi-interested multitude take it for granted, and look upon the eighteen men as if they were swinging up and down on eighteen pivots, and a spurt at Barnes Bridge were a thing as simple as an amendment to the Reform Bill. Let such bear in mind that rowing is the hardest physical exercise as yet invented, and they may more heartily congratulate the victors, and more knowingly condole with the defeated.

And there is another strange phenomenon which the public have displayed—a firm idea that they are judges of the merits of the crews, and that every daily paper about this time is endued with the spirit of prescience. The leading journal, though it held out long, fell before the cacoethes, and the Standard was also among the prophets. Is it from an abject ignorance, or a plausible per- sistency, that with one consentient voice (most rare occurrence !) the oracles of ink, as the time of the race draws on, threaten us with penury if we do not stake our fortunes on the light blue ? Ignorance, most probably a steady refusal to understand that igno- rance and acknowledge it, in fact, if they will pardon our saying so, the pivot theory just referred to, is at the root of it. Cam- bridge turned out, no question about it, a more respectable-looking crew than she has shown for the last few years ; and Oxford, to look at, was hardly up to her high standard, yet a practised eye could see in a moment that one was rowing the right way and the other the wrong—or a wrong, to speak more correctly—and an unpractised eye had no possible business to conclude that because Cambridge could row a fast stroke in fair time and swing for one mile, that therefore she could win a. race of four. That was all. There are many persons no doubt who are ignorant of the data requisite before a decision can be come to between the relative virtues and vices of two boats' crews; yet, pity though it be (for itself) that the public should be misled, it has really no excuse for being so, unless it be—to fall back again on the spirit of the age —that precedent just now is in such very bad favour.

Apart from prophecy and the public, there can be no University man who was not thoroughly satisfied with all that happened at Putney—Oxford that they won, Cambridge that they made such a splendid race of it ; for there can hardly be a Cambridge man existing who can question that " the best men won." Tho mis- fortune of the barge was no doubt a nuisance as far as the race went, it is an incalculably vast nuisance if it. has led any single soul to suppose that by its means the race was lost or won. That it was not so any one who saw the race must know well enough, and again the omniscient press has somewhat bewildered those who did not. " Cambridge ought to have passed under the stern of the barge, not the bows," says Scylla ; but that is nothing to Charybdis—" Cambridge did pass under the stern of the barge ;" (or rather, for the sake of graphic portraiture, the barge is represented as lying the other way across the river,) of both of which Mr. Forbes has no doubt made a note. We beg our readers to believe that the advice is as offi,cious as the assertion is untrue. We are not going to squander much eulogy on Mr. Forbes' steering in the early part of the race, for to Hammersmith it was clearly bad (though he deserves every credit for his sly boring of Oxford out into the rough water higher up),—but we are certainly not going to blame him for losing his men half a boat's length, when the only alternative open to him was to lose them at least two whole ones. We have said that the fault of Cambridge was a wrong style, and this may sound rather a sweeping and general charge, neverthe, less not only is it the fact, but it is a fact that, might have been discovered by the most, uninitiated eyes. Had they, taken the trouble to look for it, they would very soon have. discovered the tumble forward of the men's bodies in the one boat, and the steady balance of them in the other ; Oxford, in a word, thinking all of making the stroke fast through the water, Cam- bridge of making the feather fast through the air. It is strange no doubt that Cambridge has never followed an example which, they must have reason to consider a good one, yet so far from this.

being the case, we almost fear that we saw growing symptoms of her having to some extent followed the example of ancient Greece- " Victoreni cepit;" there was certainly a tendency to something Cambridge about the Oxford rowing, just a trifle, it is true, yet for the sake of rowing the last thing we should wish to see, is the abandonment of that style of rowing which has distin- guished Oxford during recent years. Much as we should always wish to see as good a race as this year's, still we would have "it good by the improvement of Cambridge rowing to the level of 40xford, and not by any deterioration of the latter.