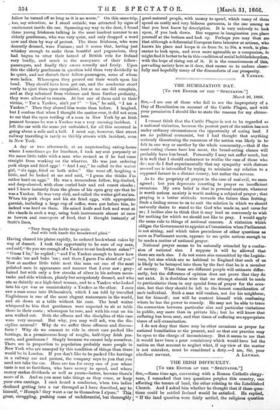 [To THE EDITOR OF THE "SPECTATOR."] March 26, 1866. SIR,—I am one of those who fail to see the impropriety of a Day of Humiliation on account of the Cattle Plague, and with your permission I should like to state the reasons for my obtuse- ness.

I cannot think that the Cattle Plague is not to be regarded as a national visitation, because the poorest part of the nation has not under ordinary circumstances the opportunity of eating beef. I am no political economist, but I had thought that anything seriously threatening the resources of the nation was likely to be felt in one way or another by the whole community,—that if the meat-eating classes have less meat, the bread-eating classes will probably have less bread. Personally I may not suffer much, but it is well that I should endeavour to realize the case of those who do ; nor do I find experimentally that my sympathy with distress around me is intensified by trying to minimize my relation to a supposed farmer in a distant county, but rather the reverse.

As to the propriety of prayer in the case of real evil, we seem

agreed ; but you deprecate resorting to prayer on insufficient occasions. My own belief is that in personal matters, whatever is worth serious anxiety is worth making a subject of prayer ; that praying is a better attitude towards the future than fretting. Such a feeling seems to us to suit the relation in which we should naturally desire to stand to the God who made us, and cares for us ; I incline also to think that it may lead us conversely to wish for nothing for which we should not like to pray. I would apply the same rule to things of national concern. A visitation which obliges the Government to appoint a Commission when Parliament is not sitting, and which takes precedence of other questions as soon as Parliament meets, appears to me quite serious enough to be made a matter of national prayer.

National prayer seems to be naturally attended by a confes- sion of national sins. I suppose it will be allowed that there are such sins. I do not mean sins committed by the Legisla- ture, but sins which are so habitual to England that each of us is likely to be betrayed into them by the fact that he is a member of society. What these are different people will estimate differ- ently, but the difference of opinion does not prove that they do not exist. It is doubtless wise that no attempt should be made to particularize them in any special form of prayer for the occa- sion, but that they should be left to the honest consideration of each individual. Such a man will confess, not for his neighbour,

but for himself ; nor will he content himself with confessing where he has the power to remedy. He may not be able to trace the connection between particular sins and particular visitations in public, any more than in private life ; but he will know that suffering has been sent, and that times of suffering are appropriate times of self-examination.

I do not deny that there may be other occasions as proper for national humiliation as the present, and so that our practice may be open to the charge of inconsistency. But it seems to me that it would have been a- poor consistency which would have led the nation on that account to neglect what, if my view of the matter is not mistaken, must be considered a duty.—I am, Sir, your