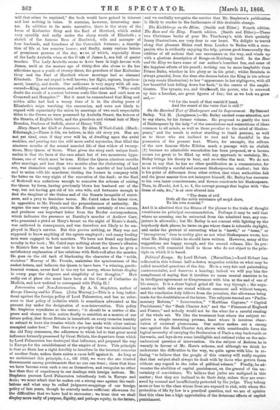 called unsettled questions of the day. Ho is a very

fair and painstaking: controversialist, and deserves a hearing; indeed we will pay him the. compliment of saying that it involves no mean mental exercise to be- in intelligent agreement or disagreement with him at the end of one of his essays. It is a sheer logical grind All the way through ; the argu- ments on both sides are stated without comment an without temper,, and the conclusion duly follows from the premises, due allowance being made for the doubtfulness of the latter. The subjects treated are "Parlia- mentary Reform," " Intervention," "Maritime Capture," " Capital Punishment," the "Bank Charter Act," and the "Finances of England and France," and nobody would not be the wiser for a careful reading of the whole set. We like the treatment best where the subject re- quires a simple reasoning process, least where it involves obser- vation of external phenomena. Our author makes out a strong case against the Bank Charter Act, shows with considerable force the logical necessity of carrying the Declaration of Paris a step backwards or forwards, and lays down some intelligible and rational rules on the mis- understood question of intervention. On the subject of Reform he is. warmly in favour of Mr. Hare's scheme, and although we think he underrates the difficulties in the way, we quite agree with him in re- fusing "to believe that the people of this country will really require that that subject shall always be dealt with by those who govern them without any regard to the rules of political science." Finally, he ad- vocates the abolition of capital punishment, on the ground of the un- certainty of convictions. We believe that juries are maligned in this matter ; that they are inclined to do 'their duty, unless they are over- awed by counsel and insufficiently protected by the judge. They belong more or less to'the class whose lives are exposed to risk, with whom the protection of life by law is a practical question, and we are of opinion that this class has a high appreciation 6f the deterrent effects of capital punishment.