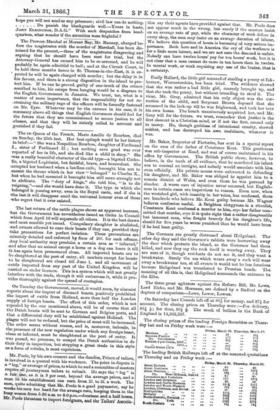 On Tuesday the Government, moved, it would seem, by alarmist

Nreporta about the import of diseased beasts, positively prohibited the import of cattle from Holland, more than half the London .supply of foreign beasts. The effect of this order, which is not repealed by the one mentioned above, will be of course that all the Dutch beasts will be sent to. German and Belgian ports, and that a differential duty will be established against Holland. The -plague will not be reduced, but the price of meat will be increased. 'The order seems without reason, and is, moreover, imbecile, in the presence of the new regulation under which any foreign beast, "clean or infected, must be slaughtered at the port of entry. It was passed, we presume, to compel the Dutch authorities to do their duty in inspection, but stopping a great trade in this_ style its a form of rebuke, is most capricious.