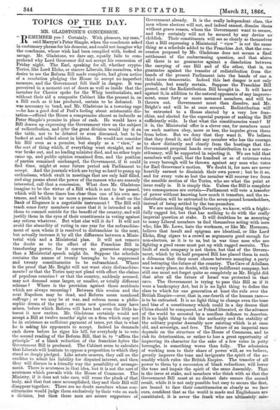 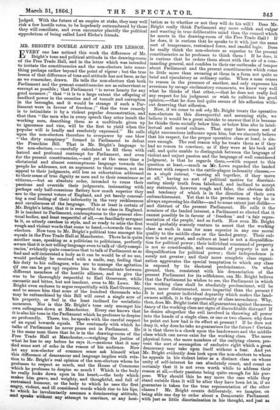 We are marching through Coventry, we know, with a. fright- fully ragged lot, but that has nothing to do with the really imperial question at stake. It will doubtless be as annoying• to many Liberal members to find themselves acting with men who, like Mr. Lowe, hate the workmen, or like Mr. Horsman, believe that insult and epigram are identical, or like Lord Elcho, fling cigars to a crowd as arguments good enough for non-electors, as it is to us, but in war time men who are fighting a good cause must put up with ragged recruits. The fault of such company is not theirs, but that of the Govern- ment, which by its half prepared Bill has placed them in such a dilemma that they must choose between annoying a party and betraying the future of the country. The Cave of Adullans was a nasty place, no doubt, with very indifferent company, but still one must not forget quite so completely as Mr. Bright did_ that after all the future of Israel was protected in that. cave. The Government is trying to pass this Bill as if it. were a bankruptcy Act, but it is no light thing to define the class to which for one generation at least.the rule over the British Empire—over, that is, one-fourth of the human race— is to be entrusted. It is no light thing to change even the tone and bias of a constituency which could in a day decree that China should be conquered, or Poland liberated, or the advance of the world be arrested by a needless defiance to America.. It is no light thing to risk the authority and the stability of the solitary popular Assembly now existing which is at once old, and sovereign, and free. The future of an imperial race depends on the structure of the House of Commons, and to risk its deterioration, or rather to lose a great opportunity of improving its character for the sake of a few votes in petty boroughs, is something worse than folly. The admission of working men to their share of power will, as we believe, greatly improve the tone and invigorate the spirit of the as- sembly which rules the British Empire. The transfer of all power to them by a succession of blank reductions, will lower the tone and impair the spirit of the same Assembly. That is the issue at stake, and members who think with us that the Government Bill must at no distant date ensure the second result,• while it is not only possible but easy to secure the first, are bound to face their constituencies as clearly as we face ours, confident that as the world is made and Englishmen are constituted, it is never the frank who are ultimately mis- judged. With the future of an empire at stake, they may well risk a few hostile votes, to be hopelessly outnumbered by those they will conciliate, and even encounter placidly the political opprobrium of being called Lord Elcho's friends.