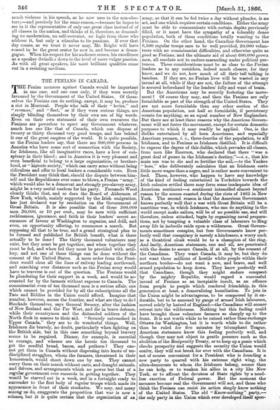 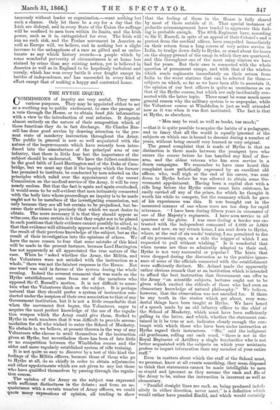 THE FENIANS IN CANADA.

riptim Fenian menaces against Canada would be important 1 in one rase, and one case only, if they were secretly favoured by the Government of the United States. Of them- selves the Fenians can do nothing, except, it may be, produce a riot in Montreal. People who talk of their " levies," and "revenue," and " fleet," as if they were serious things, are simply -blinding themselves by their own use of big words. Even on their own statement of their own resources the Fenians are powerless to upset any Government whatever, much less one like that of Canada, which can dispose of twenty or thirty thousand very good troops, and has behind it one of the great empires of the world. It is quite possible, as the Fenian leaders say, that there are 300,000 persons in _America who have some sort .of connection with the Society, for Irishmen, like all imaginative races, have a love of con- spiracy in their blood ; and in America it is very pleasant and even beneficial to belong to a large organization, or brother- hood, nr ".historic society," which can carry arms without being ridiculous and offer to local leaders a considerable vote. Even' the President may think that, should the dispute between him-, self and the Republicans ever come to blows, a Fenian "army," which would also be a democrat and strongly pro-slavery army, might be a very useful nucleus for his party. .Fernando Wood clearly thinks that, and so does the Board of Aldermen Of New York, which, mainly supported by the Irish emigration, has just declared war by resolution on the Government of Great Britain. It is also possible that of these 300,000 man 30,000, or 10 per -cent, may .be men with sufficient recklessness, ignorance, and faith in their leaders' secret as- surances of favour at Washington to organize, and drill, and' even, on opportunity offering, to commence a march. But, supposing all that to be true, and a grand strategical plan to be formed and pnbliched for British benefit, what is there actually to be done The thirty thousand volunteers may exist, but they must be got together, and when together they must be fed, and when fed they must be provided with .artil- lery, and not one of these things can be done without the consent of the United States. A mere order from the Presi- dent would close all the lines of railway leading northward, and marching over distances such as the Fenian army would have to traverse is out of the question. The Fenians would, be plundering for their support in a week, and would be ao- couuted for by the farmers without expense to Canada. The, commissariat even of ten thousand men is .a serious affair, one which cannot be provided for by all the subscriptions all the Pats and Biddies in the Union could afford. Imagine that; number, however, across the frontier, and what are they to do ? Stockade themselves, says General Sweeny, after the fashion of New Zealand and the Far West, and die in brave defence, While their countrymen and the disbanded soldiers of the North flock in masses to their aid. " Securely entrenched in Upper Canada," they are to do wonderful things. Well, Irishmen die bravely, no doubt, particularly when fighting on the British side, but in this case something beyond bravery, seems to be required. Dinner, for example, is essential to courage, and whence are the heroic ten thousand to get the needful bread, bacon, and potheen ? They can- not get them in Canada without dispersing into knots of un- disciplined stragglers, whom the farmers, threatened in their homesteads, would shoot down one by one. They cannot carry them on their march without carts, and draught animals, and drivers, and arrangements which no power but that of a regular government ever succeeds in getting together. They would be starved out in a week, and in a fortnight ready to surrender to the first body of regular troops which made its appearance in front of their stockades. We may, and many among us dq, exaggerate the proposition that war is now a science, but it is quite certain that the organization of as army, so that it can be fed twice a day without plunder, is an art, and one which requires certain conditions. Either the army must be able to communicate with certain.depots previously filled, or it must have the sympathy of a tolerably dense population, both of them conditions totally wanting to the Fenians. On the other hand, the Canadian Government has 6,500 regular troops sure to be well provided, 20;000 volun- teers with no commissariat difficulties, and otherwise quite as good as Fenians,'and the ultimate aid of about 600,000 grown men, all resolute not to endure marauding under political pre- tences. These considerations must be as clear to the Fenian leaders as to any outsiders, indeed much clearer, for they know, and we do not, how much of all their tall talking he baseless. If they are, no Fenian lives will be wasted in any . inroad at all, while if they are not, the failure of the attempt. is assured beforehand by the:leaders' folly and want of brain.

But the Americans may be secretly fostering the move- ment V Of course they may, and then the Fenian are only- formidable as part of the strength of the United States. They are not more formidable than any other section of the- American population, not half so formidable, if persistency counts for anything, as an equal -number of New Englanders. But there are at least three reasons why the American Govern ment will not foster the movement, except for certain domestic purposes to which it may readily be applied. One, is the dislike entertained by all born Americans, and especially- American yeomen, i. e., three-fourths of the population, to air Irishmen, and to Fenians as Irishmen distilled. It is -difficult. to express the degree of this dislike, which pervades all classes, from men like Emerson, who declared that there "was a. great deal of guano in the Irishman's destiny,"—i. e., that kir- main use was to die and so fertilize the soil,—to the Yankee- " boss," who deliberately calculates that an Irishman costs. little more wages than a negro, and is rather more convenient to. feed. Those, however, who happen to have any knowledge- of the -kind of feeling entertained in Yorkshire towards the Irish colonies settled there may:form some inadequate idea of American sentiment—a sentiment intensified almost beyond reason by the scenes enacted during the riots of 1865 in New York. The .second reason is that the American Government. knows perfectly well that a war with Great Britain will be a maritime 'war, in which Irishmen, who can do anything in the world except make -sailors, will be of no possible use, and will therefore, unless attacked, begin by organizing naval prepare- tione, not by tempting a valuable class of labourers to :fling" away life in imbecile raids upon a wilderness. Great Govern- ments sometimes conspire, but free Governments know ,per-- featly well that conspiracy is merely a hindrance, a worry such as .11 theatrical cloak -would be to a champion of the ring.. And lastly, American statesmen, one and all, are penetrated with the desire to secure Canada, if at all, by the consent of- the Canadians. They want •Canada, it may be, but they do- -not want three millione of hostile white people within their- northern border—do not want a new, and brave, and well armed population to keep down. They know perfectly well that Canadians, though they might endure conquest• by the mighty Republic, would regard a successful inroad of Fenians as an inexpiable insult, as an offence- from people to people which rendered friendship, in this. generation at least, a demoralizing humiliation. To join in the Union might be advantageous, to be conquered by it en- durable, but to be annexed by gangs of armed Irish labourers, moved solely by hatred of England—the Canadians will sooner retreat into the wilderness. Nothing but this feeling could have brought those volunteer farmers so sharply up to the- front. It is not worth while to be ruined rather than exchange. Ottawa for Washington, but it is worth while to die rather• than be ruled for five minutes by triumphant Teague. American statesmen know this feeling perfectly well, and though they may not object to gentle pressure such as the abolition of the Reciprocity Treaty, or to keep up a panic which checks prosperity and suggests the security the Union would_ confer, they will not break for ever with the Canadians. It is not of course convenient for a President who is founding a. new party to quarrel with his extreme right wing, the ultra-democrats to whom the Irishmen belong, sooner than he can help, or to weaken his allies in a city like New York, or to affront the devotees of State rights by a need- less exertion of Federal power. But the moment the menaces become real the Government will act, and those who think the Fenians can resist its action simply know nothing of the United States. The old " Know-nothing" party,— the only party in the Union which ever developed itself Ton- taneously without leader or organization,—want nothing but such a chance. Only let there be a cry for a day that the Irish are disloyal, and in every State of the Union the suffrage will be confined to men born within its limits, and the Irish power, such as it is, extinguished for ever. The Irish will run no such risk, and the Fenian movement in America as well as Europe will, we believe, end in nothing but a slight increase to the unhappiness of a race as gifted and as unfor- tunate as any which history records—a people which by some wonderful perversity of circumstances is at home less stained by crime than any existing nation, yet is believed in America as well as in England to be hopelessly turbulent and unruly, which has won every battle it ever fought except its battles of independence, and has succeeded in every kind of effort except that of making a happy and contented home.