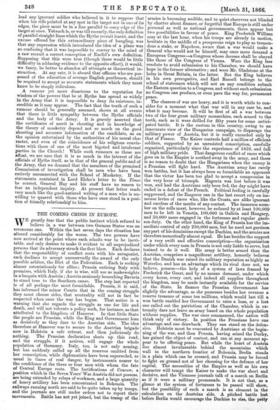 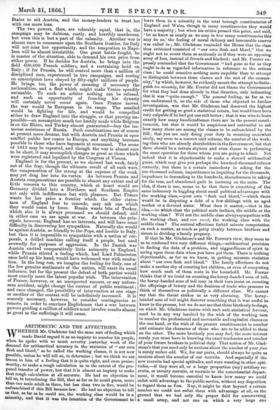 THE COMING CRISIS IN EUROPE.

WE greatly fear that the public instinct which refused to believe in a war between two German States was an erroneous one. Within the last seven days the situation has altered considerably for the worse. The two powers have now arrived at the point where each admits war to be inevi- table, and only desires to make it evident to all unprejudiced persons that its adversary struck the first blow. Each declares that the responsibility of conflict rests with his antagonist, each declines to accept unreservedly the award of the only possible arbiter, the Diet of the Federation. Each is seeking almost ostentatiously for allies ; Prussia enticing Italy with promises, which Italy, if she is wise, will use as makeweights in a bargain with Austria ; Austria anxiously beseeching Bavaria to stand true to the Southern cause. The step last reported is of all perhaps the most formidable. Prussia, it is said, has informed the minor Courts that in the coining struggle they must choose sides, that neutrality will not in fact be respected when once the war has begun. That notice is a warning that she regards the struggle as one for life and death, and will not tolerate a policy such, for instance, as that attributed to the kingdom of Hanover. In that little State the people are Prussian, while the King and Government lean as decisively as they dare to the Austrian side. The idea therefore at Hanover was to secure to the Austrian brigade now in Holstein a safe retreat, and then judiciously do nothing. The Prussian declaration shuts up this road, and the struggle, if it arrives, will engage the whole population of Germany. Italy, too, is not only arming, but has suddenly called up all the reserves omitted from her conscription, while diplomatists have been superseded, as usual in times of real danger, by instruments nearer to the confidence of the three or four men with whom the fate of Central Europe rests. The fortifications of Cracow, a position which in the Seven Years' War Austria did not possess, are being extended by relays of workmen, and a large quantity of heavy artillery has been concentrated in Bohemia. 'The railways running north are said to be quite taken up by troops, and the journals are still under orders not to report their movements. Battle has not yet joined, but the tramp of the armies is becoming audible, and to quiet observers not blinded by chatter about finance, or forgetful that Europe is still under personal as well as national governments, there appear but two possibilities in favour of peace. King Frederick William may at the last hour, when his troops are already in motion, hesitate in the middle of a prosperous reign to play so tremen- dous a stake, or Napoleon, aware that a war would make a General who would not be himself, may once more demand a European Congress—a Congress whose decrees shall be obeyed like those of the Congress of Vienna. Were the King less resolute to avoid submission to his Chamber, we should have hope in the former alternative ; and were Mr. Gladstone at the helm in Great Britain, in the latter. But the King believes in his own prerogative, and Earl Russell belongs to the school of statesmen which will not on any condition submit the Eastern question to a Congress, and without such submission no Congress can produce, or even pave the way for, permanent peace.

The chances of war are heavy, and it is worth while to con- sider for a moment what that war will in any case be, and what it may become. It will be first of all a war between two of the four great military monarchies, each armed to the teeth, each as it were drilled for fifty years for some antici- pated battle. It is the custom in this country, owing to an inaccurate view of the Hungarian campaign, to disparage the military power of Austria, but it is really exceeded only by that of France. The Kaiser controls half a million of efficient soldiers, supported by an =resisted conscription, carefully organized, particularly since the experience of 1859, and full of high military pride. That dangerous conflict of races which goes on in the Empire is soothed away in the army, and there is no reason to doubt that the Hungarians when the enemy is a Prussian will fight hard. The Austrian army has rarely won battles, but it has always been so formidable an opponent that the victor has been too glad to accept a compromise in the very hour of triumph. Magenta was lost before it was won, and had the Austrians only been fed, the day might have ended in a defeat of the French. Political feeling is carefully suppressed, and the Emperor can in the last resort rely on im- mense levies of races who, like the Croats, are alike ignorant and careless of the merits of any contest. The immense num- ber on the rolls must, however, be reduced by at least 100,000 men to be left in Venetia, 100,000 in Galicia and Hungary, and 50,000 more engaged in the fortresses and regular garri- son duty. On the other hand, the King of Prussia has the im- mediate control of only 250,000 men, but he need not garrison anypart of his dominions except the Duchies, and the armies are therefore numerically almost equal. He has besides the support of a very swift and effective conscription—the organization under which every man in Prussia is not only liable to serve, but trained to do it well. His army is better armed than the Austrian, comprises a magnificent artillery, honestly believes that the Danish war raised its military reputation as highly as Waterloo, and has an advantage which its rival does not, we believe, possess—the help of a system of laws framed by Frederick the Great, and by no means dormant, under which every horse, every cart, and indeed all supplies throughout the kingdom, may be made instantly available for the service of the State. In finance the Prussian Government has slightly the advantage, as she possesses besides her revenue a reserve treasure of some ten millions, which would last till a won battle enabled her Government to raise a loan, or a lost one called out the patriotism of the Chamber, which in ex- tremity dare not leave an army based on the whole population without supplies. The war once commenced, the nation will think only of victory. In position the Prussians have one advantage and one drawback. They can stand on the defen- sive. Holstein must be evacuated by Austrians at the begin- ning of the war, and then Prussia, having seized the Duchy, has gained the object of contest, and can at any moment ap- pear to be offering peace. But while the heart of Austria lies almost invulnerable behind the mountains which wall in the northern frontier of Bohemia, Berlin stands in a plain which can be crossed, and Prussia may be forced to fight on ground not of her choosing for the defence of her capital. The necessities of the Empire as well as his own character will tempt the Kaiser to make the war short and decisive, and the Viennese journals talk of a march on Berlin as if it were a military promenade. It is not that, as a glance at the system of fortresses to be passed will show, but the possibility of such a march is an element in the calculation on the Austrian side. A pitched battle lost before Berlin would encourage the Duchies to rise, the petty

States to aid Austria, and the money-lenders to trust her with one more loan.

The two powers, then, are tolerably equal, that is, the campaign may be dubious, costly, and horribly murderous, but even this is but a part of the calamity. Another war is almost sure to commence upon the Southern frontier, for Italy will not miss her opportunity, and the temptation to Napo- leon will be almost irresistible. One great battle fought, he is master of the situation, able to demand his own price from either power. If he decides for Austria, he brings into the field 600,000 French soldier3, and a restraining hold on Italy • if for Prussia, he will control more than a million of disciplined men, experienced in two campaigns, and resting on conscription laws obeyed by fifty-eight millions of people. He brings, too, the power of arousing if necessary the nationalities, and a fleet which might make Venice speedily untenable. To such an arbiter nothing can be refused, and such an opportunity of founding his dynasty will certainly never occur again. Once France moves, the war would be European in its range. The assailed would be fighting for life, and would be compelled either to draw England into the struggle, or that proving im- possible—an assumption much too hastily made while Belgium is on the Rhine, and Turkey almost guaranteed—buy the im- mense assistance of Russia. Such combinations are of course at present mere dreams, but with Austria and Prussia in open conflict public law ceases in Europe, and anything becomes possible to those who have bayonets at command. The scene of 1815 may be repeated, and though the war is almost sure to be short, it may accomplish changes as great as those which were registered and legalized by the Congress of Vienna. England is for the present, as we showed last week, fairly out of the fray, though the ultimate result of all such wars, the compensation of the strong at the expense of the weak, may yet drag her into its vortex. As between Prussia and Austria compensations are possible to almost any extent and of little concern to this country, which at heart would see Germany divided into a Northern and Southern Empire not only with indifference but with pleasure. But France wants for her price a frontier which the elder states- men of England fear to concede, may ask one which they would resist by force. Russia wants bits of Turkey, which also it is always presumed we should defend, and in either case we are again at war. As between the prin- cipals, however, England has no interests' and will have some difficulty in discovering her sympathies. Naturally she would be against Austria, as friendly to the Pope, and hostile to Italy, but then it is impossible to sympathize with a nation of cor- porals, a drilled machine calling itself a people, but used avowedly for purposes of aggression. In the Danish war Austria excited comparatively little animosity in England, while Prussia stirred a feeling which, had Lord Palmerston once held up his hand, would have welcomed war with exulta- tion. In the long run, we imagine the feeling for Italy, one of the few genuine sentiments of the nation, will exert its usual influence, but for the present the defeat of both parties would most exactly meet the latent popular wish. The intervention of France, however, or an unexpected success, or any unfore- seen accident, might change the current of public sentiment ; and once changed, the possibility of intervention at one stage or another of the contest will be indefinitely increased. It is scarcely necessary, however, to consider contingencies so remote, in order to convince Englishmen that a war between powers guiding a million of soldiers must involve results almost as great as the sufferings it will cause.