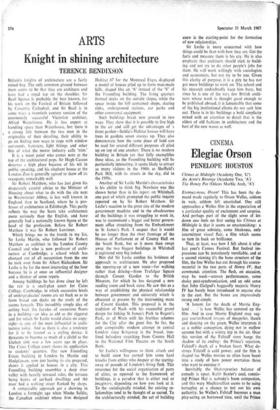 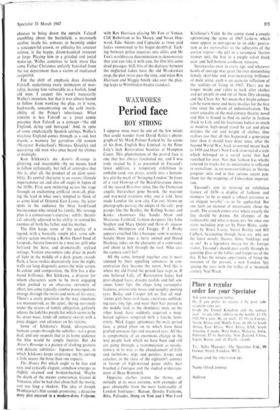 Chimes at Midnight (Academy One, `U') An Actor's Revenge (Academy Two, 'A') The Honey Pot (Odeon Marble Arch, 'A') Etonnez-nous, Orson! This has been the de- mand made regularly to Orson Welles, seldom in vain, seldom left unsatisfied. One still approaches a Welles film in the expectation of a particular quality of excitement and surprise. And perhaps part of the slight sense of let- down one feels on first seeing his Chimes at Midnight is that it seems so unastonishing: a film of great sobriety, some bleakness, only intermittent visual flair, a film which seems to turn its back on brilliance.

That, at least, was how I felt about it after last year's Cannes Festival. But festival im- pressions can be notoriously unreliable, and at a second viewing it's the bone structure of the film, the line Welles has cut through his source- material in the two parts of Henry IV, that commands attention. The flesh, on occasion, may be weak—uneven performances, some shaky post-synchronisation, and an odd sense that John Gielgud's haggardly majestic Henry IV has barely been introduced to anyone else in the cast. But the bones are impressively strong and simple.

'A lament for the death of Merrie Eng- land . . .' is how Welles has summed up the film. And in case Merrie England may sug- gest tourist-board images of maypoles, thatch and dancing on the green, Welles interprets it as a nobler conception, dying not in mellow autumn but with a wintry nip in the air. Over this version of the Falstaff story hangs the shadow of its ending: the Prince's rejection, Falstaff's death of a broken heart. What de- stroys Falstaff is cold power; and the film is shaped (as Welles movies so often have been) into a study of how power overtakes those who want to exercise it.

Inevitably the Shakespearian balance of comedy is upset. Keith Baxter's cool, conniv- ing'Prince Hal is nobody's boon companion, and this wary Machiavellian seems to be using horseplay as a chance to test out his own authority. So Welles's Falstaff becomes a man play-acting on borrowed time, until the Prince chooses to bring down the curtain. Falstaff stumbling about the battlefield, a mammoth sardine inside his armour, or beaming under a saucepan-lid crown, or enlisting his amateur retinue, is the happy, doom-haunted innocent at large. Playing him in a grizzled and jovial make-up, Welles contrives to look more like some Father Christmas unfairly banished from the toy department than a victim of mediaeval realpolitik.

For the shift of emphasis does diminish Falstaff, underlining every intimation of mor- tality, leaving him vulnerable as a foolish, fond old man. I suspect this wasn't necessarily Welles's intention, but that it was almost bound to follow from working the play, as it were, backwards, concentrating on the cold inevit- ability of the Prince's inheritance. What remains is less Falstaff as a great comic presence than Falstaff as a concept-111e old England, dying and betrayed.' And, in spite of some emphatically Spanish settings, Welles's maytime England comes through as a sad, lost dream, a memory for garrulous old women (Margaret Rutherford's Mistress Quickly) and quavering old men who once heard the chimes at midnight.

Kon Ichikawa's An Actor's Revenge is glittering and inscrutable—by no means hard to follow stylistically, but full of reminders that this is, after all, the product of an alien sensi- bility. Its central character is an oyama (female impersonator on and also off stage) in Japan of the 1830s. First seen twittering across the stage through an enchanting artificial snowfall, play- ing the lead in what one's tempted to think of as some kind of Oriental East Lynne, the actor spots in the audience the three hard-faced businessmen who ruined his family. His revenge plan is a connoisseur's exercise: subtle, theatri- cal, adroitly adjusted to his ability to remind his enemies of both his father and his mother.

The film keeps some of the quality of a legend, with a basically simple plot, some sub- sidiary action involving a Robin Hood band of footpads, theatre fanciers to a man (or girl) who befriend the hero, and dramatically stylised settings. Violent encounters take place in pools of light in the middle of a dark green; swords flash, a lasso snakes decoratively into the night; walls cut long diagonals across the wide screen. In colour and composition, the film has a dia- mond brilliance. But Ichikawa, a director for whom characters seem to be most engaging when pushed to an obsessive extremity of effort, lets some typically sombre preoccupations emerge through the twists and turns of his story. There's a steely precision in the way situations are manoeuvred, as the actor, shying nervously under the strains of family obligation, gallantly adjusts the ladylike purple hat which seems to be his street wear, fends off samurai swords with a puny dagger. and advances on his victims.

Some of Ichikawa's bland, idiosyncratic humour creeps through the subtitles: not a great deal, and one suspects that to its home audience the film would be simply funnier. But An Actor's Revenge is a picture of slashing gestures and delicate subtleties: Japanese baroque, in which Ichikawa keeps surprising one by cutting a little nearer the bone than one expects.

The Honey Pot which ought to be free and easy and cynically elegant, somehow emerges as slightly strained and broken-backed. Maybe the death of the master cameraman, Gianni di Venanzo, after he had shot about half the movie, cast too long a shadow. The idea of Joseph Mankiewicz's film sounds promising: a detective story plot encased in a modern-dress V olporte,

with Rex Harrison playing Mr Fox of Venice, Cliff Robertson as his Mosca, and Susan Hay- ward, Edie Adams and Capucine as three avid ladies summoned to his bogus deathbed. Tack- ing between police inquiries into alibis and Mr Fox's worldweary determination to demonstrate that you can take it with you, the film hits some dead passages. Still, bits of the dialogue between the neglected ladies have the old Mankiewicz rasp, the plot twists pass the time, and when Rex Harrison and Maggie Smith take over the play- ing leaps to Wimbledon finalist standard.