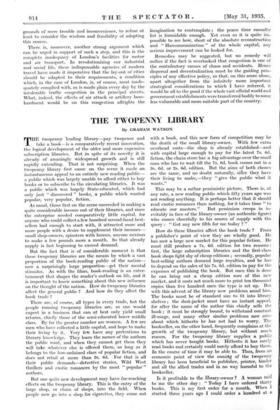 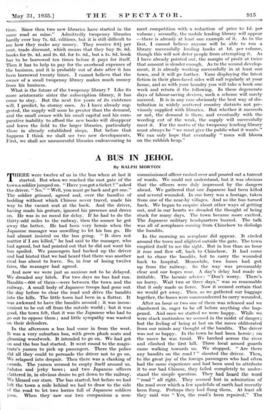 THE twopenny lending library—pay twopence and take a book—is a comparatively recent innovation, the logical development of the older and more expensive subscription libraries. But in spite of its novelty it is already of amazingly widespread growth and is still rapidly extending. That is not surpriiing. When the twopenny library first came on the scene it made an instantaneous appeal to an entirely new reading public— a public which was largely unable to afford either to buy books or to subscribe to the circulating libraries. It was a public which was largely State-educated, which had only just " discovered " books, a public which wanted popular, very popular, fiction.

As usual, those first on the scene succeeded in making a quite considerable income out of their libraries, and since the enterprise needed comparatively little capital, for anyone who could collect a few hundred second-hand best- sellers had enough to start with, it attracted more and more people with a desire to supplement their incomes— small shop-owners, spinsters with houses, anyone anxious to make a few pounds more a month. So that already supply is fast beginning to exceed demand.

But the fact that is of considerable moment is that these twopenny libraries are the means by which a vast proportion of the book-reading public of the nation= now a surprisingly large proportion—get their mental stimulus. As with the films, book-reading is an enter- tainment that shapes the reader's outlook on life, and it is important to know something about this new influence on the thought of the nation. How do twopenny libraries affect the general public ? And how do they affect the book trade ?

There are, of course, all types in every trade, but the people running twopenny libraries are, as one would expect in a business that can at best only yield small returns, chiefly those of the semi-educated lower middle class. By far the greater number are women. A few are men who have collected a little capital, and hope to make their living by it. Very few have any pretentions to literary knowledge. They learn the names of the authors the public want, and when they cannot get them they will take whatever else is offered them, so long as it belongs to the fore-ordained class of popular fiction, and does not retail at more than 3s. 6d. For that is all their public demands—detective stories, Wild West thrillers and exotic romances by the most " popular " authors.

But one quite new development may have far-reaching effects on the twopenny library. This is the entry of the large shop, or chain of shops, into the field. When people now go into a shop for cigarettes, they come out with a book, and this new form of competition may be the death of the small library-owner. With few extra overhead costs—the shop is already established—and with capital large enough to pay for the latest 7s. 6d. fiction, the chain store has a big advantage over the small man who has to wait till the 7s. 6d. book comes out in a 3s. 6d. or 2s. 6d. edition. But the aims of both classes are the same, and no doubt naturally, since they have their living to make,—they " give the public what it wants."

This may be a rather pessimistic picture. There is, at any rate, a new reading public which fifty years ago was not reading anything. It is perhaps better that it should read exotic romances than nothing, for it takes time " to educate our masters." But pessimism creeps in in- evitably in face of the library-owner (an authentic figure) who comes cheerfully to his source of supply with the query : " Got any new filth for me today ? "

How do these libraries affect the book trade ? From a publisher's point of view they are wholly good. He has now a large new market for this popular fiction. He must still produce a 7s. 6d. edition for two reasons : first, the large subscription libraries and the first-class book shops fight shy of cheap editions ; secondly, popular best-selling authors demand large royalties, and he has to depend on the sales of his 7s. 6d. edition to pay for the expenses of publishing the book. But once this- is done he can bring out a cheap edition sure of this new market, and it costs not much more to print ten thousand copies than five hundred once the type is set up. But with this advent of the library new problems assail him. The books must be of standard size to fit into library shelves ; the dust-jacket must have an instant appeal, for after the name of the author this chiefly sells the book ; it must be strongly bound, to withstand constant ill-usage, and many other similar problems now arise about which hitherto he has not had to worry. The bookseller, on the other hand, frequently complains at the growth of the twopenny library, but without much reason. For the twopenny library supplies a public which has never bought books. Hitherto it has rarely read books and certainly could rarely afford to buy them. In the course of time it may be able to. Thus, from an economic point of view the coming of the twopenny library has been beneficial to publisher, printer, binder and all the allied trades and in no way harmful to the bookseller.

Is it profitable to the library-owner ? A woman said to me the other day : " Today I have ordered thirty books. This is my first order for a month. When I started three years ago I could order a hundred at a time. Since then two new libraries have started in the same road as mine." Admittedly twopenny libraries hardly ever buy 7s. 6d. editions, but it is still difficult to see how they make any money. They receive 33} per cent. trade discount, which means that they buy 3s. 6d. books for 2s. 4d. and 2s. 6d. for is. 8d., but a ls. 8d. book has to be borrowed ten times before it pays for itself. Then it has to help to pay for the overhead expenses of the business, and it is probably out of date after it has been borrowed twenty times. I cannot believe that the owner of a small twopenny library makes much money from his business.

What is the future of the twopenny library ? Like its more aristocratic sister the subscription library, it has come to stay. But the next few years of its existence will, I predict, be stormy ones. As I have already sug- gested, the supply will soon be greater than the demand, and the small owner with his small capital and his com- parative inability to afford the new books will disappear and leave the field to the larger libraries, particularly those in already established shops. But before that happens I think we shall see two new developments. First, we shall see unsuccessful libraries endeavouring to meet competition with a reduction of price to ld. per volume ; secondly, the mobile lending library will appear —there is already at least one example of it. As to the first, I cannot believe anyone will be able to run a library successfully lending books at Id. per volume, though this will not deter people from attempting it. As I have already pointed out, the margin of profit at twice that amount is slender enough. As to the second develop- ment, it is already working successfully in at least one town, and it will go further. Vans displaying the latest fiction in their glass-faced sides will call regularly at your house, and as with your laundry you will take a book one week and return it the following. In these degenerate days of labour-saving devices, such a scheme will surely succeed. It is in any case obviously the best way of dis- tribution in widely scattered country districts not pre- viously supplied with libraries. But whether it succeeds or not, the demand is there, and eventually with the weeding cut of the weak, the supply will successfully meet it. For the motto of the twopenny lending library must always be " we must give the public what it wants." We can only hope that eventually " roses will bloom on the rubbish heap."