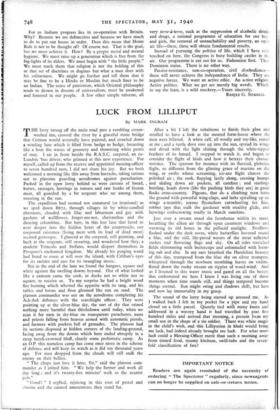 THE lorry swung off the main road past a rambling cream- washed inn, crossed the river by a graceful stone bridge that Cotman would assuredly have painted, and crawled down a winding lane which it filled from hedge to hedge, breasting like a boat the waves of greenery and showering white petals of may. I sat in front beside the R.A.S.C. corporal, an ex- London 'bus driver, who grinned at this new experience. For myself, called up from the reserve and appointed messing-officer to seven hundred men, I did not share his joy. But we both welcomed a morning like this away from barracks, taking rations out to platoons guarding aerodromes against parachutists. Packed in the open lorry behind us were cartons of bread, butter, sausages, herrings in tomato and raw hunks of frozen meat, all guarded by a fat sergeant who sat among them, sweating in the sun.

The expedition had seemed not unnatural (or irrational) as we sped down B672, through villages lit by white-candled chestnuts, clouded with lilac and laburnum and gay with gardens of wallflower, forget-me-not, cheiranthus and the dancing columbine. But here, in this lost lane that lured us ever deeper into the hidden heart of the countryside, our corporeal existence (living meat with its load of dead meat) seemed grotesque. I glanced at the corporal, still grinning, and back at the sergeant, still sweating, and wondered how they, a modern Trinculo and Stefano, would disport themselves in Prospero's enchanted kingdom. Me already his purging wand had freed to roam at will over the island, with Caliban's eyes for its rarities and ears for its twangling music.

But at the end of the lane we found the hangars, square and white against the swelling downs beyond. Out of what looked like a canteen came the cook, in ducks not so white nor so square, to receive us. To my surprise he had a bright wood fire burning which whetted the appetite with its tang, and his tables and forms and floor gleamed like sun on sand. The platoon commander was out on the aerodrome completing his Ack-Ack defences with the searchlight officer. They were pointing up at the silver-blue sky, the sort of sky that rained nothing more harmful than thistledown until today, when we scan it for men in sky-blue on transparent parachutes, nuns and priests falling from heaven armed with automatic pistols, and farmers with pockets full of grenades. The platoon had its sections disposed at hidden corners of the landing-ground, facing away from the downs which here ended abruptly in a steep beech-crowned bluff, clearly some prehistoric- camp. As an O.P. this nameless camp has come once more in the scheme of defence and will keep its watch as it did ten thousand years ago. For men dropped from the clouds will still stalk the enemy on their bellies.

" The chaps just love it here, Sir," said the platoon com- mander as I joined him. " We help the farmer and work all day long ; and it's twenty-five minutes' walk to the nearest pub."

" Good! " I replied, rejoicing in this rout of petrol and cinema and the canned amusements they stand for. After a bit I left the subalterns to finish their plan and strolled to have a look at the moated farm-house where the men were billeted. A white calf, all woolly and toy-hike, stared at me ; and a turtle dove rose up into the sun, spread its wings and dived with the light shining through the white-tipped feathers of its fantail. I stopped to watch it, and began to consider the flight of birds and how it betrays their charac- teristics. The sparrow for instance with its flurried, plebeian flight, so different from the glinting grace of martins on the wing, or swifts whose screaming, ice-axe flight cleaves the polished air ; the rook, flapping lazily along, cresting bumps and sliding down air pockets, all carefree ; and starlings beetling, heads down (like the pushing birds they are) in great flocks cross-country. Pigeons, that do a climbing turn from the ground with powerful wing-claps, and larks spiralling up on wings a-tremble; joyous flycatchers cartwheeling for file: robber jays that stalk the gardener with stealthy glide, an lapwings corkscrewing madly in March sunshine.

Just over a stream stood the farmhouse within its moat, breathing the silken air through open casement windows and warming its old bones in the pellucid sunlight. Swallows flashed under the dark eaves, white butterflies hovered round a lilac, and the still, lily-paved waters of the moat reflected rushes and flowering flags and sky. On all sides stretched fields shimmering with buttercups and colonnaded with loom- ing 'oak and elm. In my ears breathed the Handelian bravery of this day, trumpeted from the blue sky on silver trumpets, whispered through the newborn trembling leaves on violins, fluted down the rushy stream on ripples of wood-wind. And as I listened to this water music and gazed on all the beauty that embowered me here I knew I was living one of those moments when time stands still, and things temporal become things eternal. Sun might swing and shadows shift, but here and now lay immortality in my grasp.

The sound of the lorry being started up aroused me. As I walked back I felt in my pocket for a pipe and my hand closed on a little parcel. Queerly tied vial many knots and addressed in a wavery hand it had travelled by post five hundred miles and arrived that morning, a present from my small son in the shape of a tin soldier. There was white magic in the child's wish, and this Lilliputian in khaki would bring me luck, had indeed already brought me luck. For what more luck could a Messing-Officer merit than such a morning away from tinned food, steamy kitchens, swill-tubs and the seven- fold classification of fats?