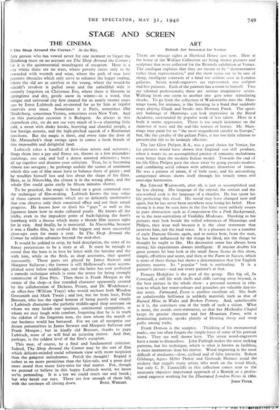 ;‘ The Shop Around the Corner." At the Ritz.

Arty person who has vowed never for one moment to forget the Blitzkrieg must on no account see The Shop Around the Corner ; for it is the quintessential mandragora of escapism. Here is a city where there are no wars, where poverty exists only to be rewarded with warmth and wine, where the path of true love presents obstacles which only serve to enhance the happy • ending, where the old are as carefree as the young, where the would-be suicide's revolver is pulled away and the unfaithful wife is serenely forgotten on Christmas Eve, where there is blossom in springtime and dry, gentle snow in winter—in a word, that unique and universal city first created for us nearly twenty years ago by Ernst Lubitsch and re-created for us by him at regular intervals ever since. Sometimes it is Paris, sometimes Old Heidelberg, sometimes Vienna, sometimes even New York. And on this particular occasion it is Budapest. As always in this chameleon city, we do not see very much of it—a charming little café, a street with dinky kiosks, hurrying and cheerful people, a few foreign accents, and the high-pitched squeak of a Ruritanian taxi-horn. But the magic is there, and every time the door of Mr. Matuschek's shop swings open in comes a fresh breath of this impossible and delightful land.

Lubitsch takes a handful of first-class actors and actresses ; flings them into a gay and flimsy set, throws in a few misunder- standings, one cad, and half a dozen assorted whimsies ; beats all up together and disarms your criticism. True, he is becoming almost too arrogant ; he prolongs unduly the scenes of sentiment which this sort of film must have to balance those of gaiety ; and he troubles himself less and less about the shape of his films. Here, as in Ninotchka, the climax is in the wrong place, and the whole film could quite easily be fifteen minutes shorter.

To be practical, the magic is based on a great command over the technique of film-making. Lubitsch knows the true value of those camera movements which are so delicately unobtrusive that you observe only their emotional effect and not their actual progress. He knows how to distil his " gags " as well as the Japanese know how to make cultured pearls. He knows all the tricks, even to the impudent point of back-lighting the hero's homburg with a finesse which many a blonde film actress sighs for in vain. And finally, he is mercurial. In Ninotchka, because it was a Garbo film, he evolved the biggest and most successful close-ups seen for many a year. In The Shop Around the Corner he seldom advances beyond the mid-shot.

It would be unkind to strip, by bald description, the story of its flimsy pretensions to be a story at all. It must be enough to reveal that the hero is in love by letter with the heroine and she with him, while in the flesh, as shop assistants, they quarrel incessantly. These parts are played by James Stewart and Margaret Sullavan ; the former is still Hollywood's most accom- plished actor below middle-age, and the latter has now perfected a comedy technique which is none the worse for being strongly reminiscent of Zasu Pitts. Then there is Frank Morgan as the owner of the shop—a fine rounded character apparently created by the collaboration of Dickens, Proust, and Dr. Wodehouse ; an office-boy (William Tracy) who would enchant both Weedon Grossmith and Mark Twain ; and last, but far from least, Felix Bressart, who has the signal honour of being purely and simply a Lubitsch character—the pathetic middle-aged shop assistant on whom we may lavish our spurious, sentimental sympathies, at whom we may laugh with comfort, forgetting that he is in truth the eidolon of the forgotten men, the men whom the march of our business world has betrayed. For we can all recognise our dream personalities in James Stewart and Margaret Sullavan and Frank Morgan ; but in kindly old Bressart, thanks to papa Lubitsch, none of us will find an accusing mirror. And that, perhaps, is the coldest level of the film's escapism.

This may, of course, be a final and fundamental criticism. Indeed, The Shop Around the Corner may be the sort of film which delicate-minded social reformers view with more suspicion than the gangster melodramas. Perish the thought! Regard it rather as no more pernicious than the fairy-tale, and a great deal more moral than many fairy-tales for that matter. For, though we pretend to believe in this happy Lubitsch world, we know we're pretending. It is a "toy we could reach out and break ; but why break our toys. There are few enough of them left,

with the toyshops all closing down. BASIL WRIGHT.