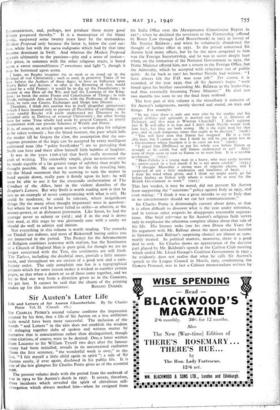 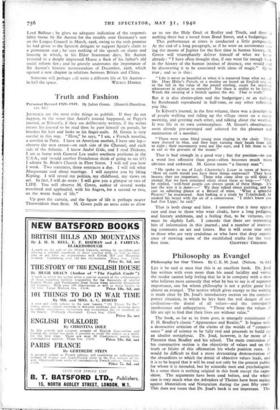 Life and Letters of Sir Austen Chamberlain. By Sir Charles Petrie. Vol. II. (Cassell. 165.) SIR CHARLES PETRIE'S second volume confirms the impression created by his first, that a life of Sir Austen on a less ambitious scale would have been more successful. The inclusion of the words " and Letters " in the title does not establish the wisdom of stringing together slabs of spoken and written matter by narrative that is conscientious rather than distinguished, though some citations, of course, were to be desired. One, a letter written from Locarno to Sir William Tyrrell two days after the famous treaty had been initialled, reveals in its unrestrained exaltation from- the first sentence, " the wonderful week is over," to the last, "I felt myself a little child again in spirit ") a side of Sir Austen rarely, if ever again, disclosed in his public life. It is ( ne of'the few glimpses Sir Charles Petrie gives us of the essential matt The present volume deals with the period from the outbreak of war in 1914 to Sir Austen's death in 1937. It covers, therefore, three incidents which revealed the spirit of chivalrous self- abnegation which always marked him—when he resigned from the India Office over the Mesopotamia Commission Report in 1917 ; when he declined the reversion to the Premiership (offered by Bonar Law through Lord Beaverbrook) in 1923 in favour of Mr. Stanley Baldwin ; and when he voluntarily abandoned the thought of further office in 1931. In the period concerned Sir Austen held many offices, but by far the most congenial to him was the Foreign Secretaryship, and he was in secret deeply hurt when, on the formation of the National Government in 1931, the Prime Minister offered him, not a return to the Foreign Office, but the Admiralty, which he accepted with reluctance out of public spirit. As far back as 1917 his brother Neville had written: " I have always felt the F.O. was your job." Per contra, it is recorded, of the year 1930, that all Sir Austen's hopes " were based upon his brother succeeding Mr. Baldwin in the leadership, and thus eventually becoming Prime Minister." He died just two months too soon to see the final hope realised.

The best part of this volume is the miscellany it contains of Sir Austen's judgements, mostly shrewd and sound, on men and things. For example : " In my view there is only one man who by his studies and his special abilities and aptitudes is marked out for it [a Ministry of Defence), and that man is Winston Churchill! I don't suppose that S. B. will offer it to him and I don't think Neville would wish him back, but they are both wrong. He is the right man for that post, and in such dangerous times that ought to be decisive." (1936.) " You will have seen that Simon has resigned. He is a very able man, but I cannot say that I think he will be any great loss to a Government whose business it is to carry on war." (1916.) " I urged him [Dollfuss] to put his whole case before Simon as strongly as he could, but will Simon understand or act? Alas! none of them seem to turn to Simon or to trust him. It is a terrible misfortune." (1933.) " Hore-Pelisha is a young man in a hurry, who may easily involve his motor-coach in a bad smash if he is not more careful." (1935.) " I thought Mussolini a strong man of singular charm, and I suspected of not a little tenderness and loneliness of heart. . . . I trust his word when given, and I think we might easily go far before finding an Italian with whom it would be as easy for the British Government to work." (1925.)

This last verdict, it may be noted, did not prevent Sir Austen from supporting the " sanctions " policy against Italy in 1935, and even stating: " I think it was a great mistake to say to Italy that in no circumstances should we cut her communications."

Sir Charles Petrie is distressingly cursory about dates, so that it is often difficult to discover what is the year under reference, and in various other respects he disappoints reasonable expecta- tions. One brief reference to Sir Austen's religious faith serves only to emphasise the otherwise complete silence about that side of his life. His literary tasks (see his own Down the Years for his argument with Mr. Balfour about the most attractive heroine in literature, and Balfour's surprising choice) are almost as sum- marily treated. In political matters, moreover, there is a good deal to seek. Sir Charles shows no appreciation of the decisive part played by Mr. Baldwin's speech at the Carlton Club meeting which ended Mr. Lloyd George's Coalition Government in 1922 ; he evidently does not realise that what he calls Sir Austen's speech to the League Council in March, 1925, condemning the Geneva Protocol, was in fact a Cabinet memorandum written by

Lord Balfour ; he gives no adequate indication of the responsi- bility borne by Sir Austen for the trouble over Germany's seat on the League Council in March, 1926, owing to the rash promise he had given to the Spanish delegate to support Spain's claim to a permanent seat ; he says nothing of the speech on slums and housing in which, in his Elder Statesman days, Sir Austen revealed to a deeply impressed House a flash of his father's old social reform fire ; and he gravely underrates the importance of Sir Austen's historic memorandum of December, 1926, which opened a new chapter in relations between Britain and China.

Someone will perhaps sill write a different life of Sir Austen—