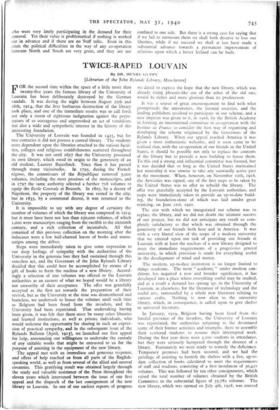 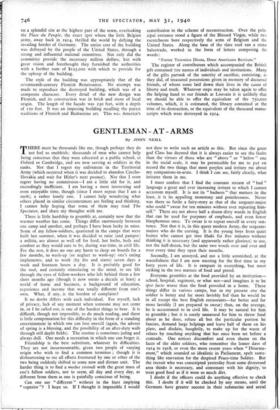 [Librarian of the john Rylands Library, Manchester] FOR the second time within the space of a little more than twenty-five years the famous library of the University of Louvain has been deliberately destroyed by the German vandals. It was during the night between August 25th and 26th, 1914, that the first barbarous destruction of the library took place, and one of the immediate results was to call forth not only a storm of righteous indignation against the perpe- trators of so outrageous and unprovoked an act of vandalism, but also a wide and sympathetic interest in the history of this interesting foundation.

The University of Louvain was founded in 1425, but for two centuries it did not possess a central library. The students were dependent upon the libraries attached to the various facul- ties, colleges and religious establishments scattered throughout the city. It was not until 1627 that the University possessed its own library, which owed its origin to the generosity of an old student, Laurent Bayerlinck. Since then it has passed through many vicissitudes. In 1795, during the French regime, the commissars of the Republique removed 5,000 volumes, including the most precious of the manuscripts, and in 1797 the same authority selected a further 718 volumes to equip the Ecole Centrale at Brussels. In 18o5, by a decree of Napoleod, the property of the library was vested in the city, but in 1835, by a communal decree, it was returned to the University.

It is impossible to say with any degree of certainty the number of volumes of which the library was composed in 1914, but it must have been not less than 250,000 volumes, of which x,000 were manuscripts ranging from the twelfth to the sixteenth century, and a rich collection of incunabula. All that remained of this previous collection on the morning after the holocaust were a few half-charred leaves of books and manu- scripts among the debris.

Steps were immediately taken to give some expression to our deep feelings of sympathy with the authorities of the University in the grievous loss they had sustained through this senseless act, and the Governors of the John Rylands Library decided that this could best be accomplished by means of a gift of books to form the nucleus of a new library. Accord- ingly a selection of 200 volumes was offered to the Louvain authorities as an earnest of what we hoped would be a library not unworthy of their acceptance. The offer was gratefully accepted as the first act towards the preparation of their revival, but as the University at the time was dismembered and homeless, we undertook to house the volumes until such time as Belgium had been freed from the invaders, and the University had been repatriated. That undertaking having been given, it was felt that there must be many other libraries and learned institutions, as well as private individuals, who would welcome the opportunity for sharing in such an expres- sion of practical sympathy, and in the subsequent issue of the Rylands Bulletin (April, 1915), we launched our first appeal for help, announcing our willingness to undertake the custody of any suitable works that might be entrusted to us for the purpose of assisting in the equipment of the new library.

The appeal met with an immediate and generous response, and offers of help reached us from all parts of the English- speaking world, as well as from several of the allied and neutral countries. This gratifying result was obtained largely through the ready and valuable assistance of the Press throughout the eleven years which intervened between the issue of our first appeal and the dispatch of the last consignment of the new library to Louvain. In one of our earliest reports of progress we dared to express the hope that the new library, which was already rising phoenix-like out of the ashes of the old one, would be richer and more glorious than its predecessor.

It was a source of great encouragement to find with what promptitude the universities, the learned societies, and the leading publishers resolved to participate in our scheme, and a new impetus was given to it, in 1916, by the British Academy in forming an international committee in co-operation with the Institut de France to consider the best way of organising and developing the scheme originated by the Governors of the Rylands Library. When our appeal reached America it Was given a most enthusiastic welcome, and it soon came to be realised that, with the co-operation of our friends in the United States, it should be possible not only to replace the contents of the library but to provide a new building to house them. To this end a strong and influential committee was formed, but it was decided that so long as the United States maintained her neutrality it was unwise to take any outwardly active part in the movement. When, however, on November 11th, 1918, the Armistice was signed, one of the first steps to be taken by the United States was to offer to rebuild the library. The offer was gratefully accepted by the Louvain authorities, and steps were immediately taken to provide an up-to-date build- ing, the foundation-stone of which was laid amidst great rejoicing, on June 21st, 1921.

The aim with which we inaugurated our scheme was to replace the library, and we did not doubt the ultimate success of our project, but we did not anticipate any result so com- pletely satisfactory as that which was obtained through the generosity of our friends both here and in America. It was with a very liberal view of the scope of a modern university that we entered upon our task of providing our friends at Louvain with at least the nucleus of a new library designed to meet the immediate requirements of a progressive general university, in which provision is made for everything useful in the development of mind and matter.

The modern, up-to-date institution is no longer limited to things academic. The term " academic " under modern con- ditions has acquired a new and broader significance, it has developed into a place where everything useful may be studied, and as a result a demand has sprung up, in the University of Louvain, as elsewhere, for the literature of technology and the useful arts, surrounded by a whole new literature relating to various crafts. Nothing is now alien to the university library, which, in consequence, is called upon to give shelter to universal literature.

In January, 1919, Belgium having been freed from the hateful presence of the invaders, the University of Louvain was repatriated, the authorities returning to the devastated scene of their former activities and triumphs, there to assemble their scattered students to resume their interrupted work. During the first year there were 3,200 students in attendance, but they were seriously hampered through the absence of a library. Fortunately we were ready to remedy the deficiency. Temporary premises had been secured, and we had the privilege of assisting to furnish the shelves with a live, up-to- date collection of books calculated to meet the requirements of staff and students, consisting of a first instalment of 30,427 volumes. This was followed by ten other consignments, which raised the total number of volumes obtained by the British Committee to the substantial figure of 55,782 volumes. The new library, which was opened on July 4th, 1928, was erected on a splendid site at the highest part of the town, overlooking the Place du Peuple, the exact spot where the little Belgian army, away back in 1914, thrilled the world by defying the invading hordes of Germany. The entire cost of the building was defrayed by the people of the United States, through a strong and influential national committee. Not only did the committee provide the necessary million dollars, but with great vision and forethought they furnished the authorities with a further sum of $125,000 with which to provide for the upkeep of the building.

The style of the building was appropriately that of the seventeenth-century Flemish Renaissance. No attempt was made to reproduce the destroyed building, which was of a composite character. Every detail of the new design was Flemish, and its construction was in brick and stone of local origin. The length of the façade was 23o feet, with a depth of 150 feet. It was an imposing building recalling the purest traditions of Flemish and Brabantine art. This was America's contribution to the scheme of reconstruction. Over the prin- cipal entrance stood a figure of the Blessed Virgin, while twc escutcheons bore respectively the arms of Belgium and the United States. Along the base of the slate roof ran a stone balustrade, worked in the form of letters composing the words:

The register of contributors which accompanied the British gift contained 70o names of individuals and institutions. Many of the gifts partook of the sanctity of sacrifice, consisting, as they did, of treasured possessions given in memory of deceased friends, of whom some laid down their lives in the cause of liberty and truth. Whatever steps may be taken again to offer the helping hand to our friends at Louvain it is unlikely that we should be able to offer the equivalent of the 750,000 volumes, which, it is estimated, the library contained at the time of its destruction, or the equivalent of the thousand manu- scripts which were destroyed in 1914.