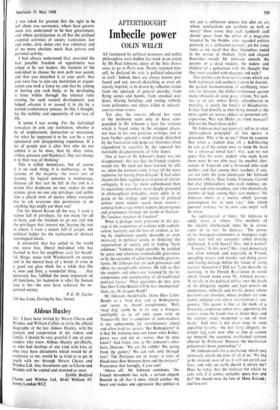 All fascinated by political processes and public philosophies were bidden last week in an article by Mr Paul Johnson, editor of the New States- man, to go to Paris now. Newly returned him- self, he declared his visit 'a political education in itself.' Indeed, there are always lessons pro- found and sad, morals disturbing or even ob- scurely hopeful, to be drawn by reflective minds from the spectacle of general anarchy, from Hying stones and bombs, from smashed win- dows, blazing buildings and rotting rubbish, from policemen and others killed or injured: sum lacrimae rerum.

Yet alas, the courses offered last week at the Sorbonne seem only to have com- pounded in Mr Johnson a taste for violence which is found today in the strangest places, not least in his own previous writings; and to have further agitated a mind already disturbed by the frustration and desperate bitterness often engendered in socialists by the repeated but inevitable disappointment of false hopes.

One at least of Mr Johnson's hopes was not disappointed: this was that the French students would rise. He need not have worried, he tells us; when the moment came, it was 'all the more explosive for having been delayed.' It had other charms for him, regaled to us in prose of sinister ambiguity. It was 'far more sophisticated than its equivalents elsewhere, more deeply grounded in philosophical principles, more adult in its grasp of the strategy and tactics of political action; more violent—much more violent— coming from a race which respects intransigence and pronounces lovingly the words of Danton: De l'audace, toujours de l'audaceP What is perhaps most gruesome in this pas- sage is the association of violence with sophisti- cation, maturity and the love of wisdom, as be-

ing by. implication equally desirable or even necessary in political action, in 'debating' the

organisation of society and in finding 'fresh solutions.' Violence might possibly be justified by great and otherwise irremediable grievances or by the certainty of achieving thereby great re- forms. Mr Johnson lists no such grievances and offers no recognisable reforms. He tells us that the students and others are 'sickened by the in- competence and complacency of all traditional political forces.' What guarantee do they give that Herr Cohn-Bendit will be less 'incompetent' than, say, M. Jacques Rueff ?

Mr Johnson, incidentally, likens Herr Cohn- Bendit to a 'mad dog' and to Robespierre, and seems to intend compliments. Well, 'mad dog' could be in its way a bouquet, intelligibly so to all who agree with de Tocqueville that 'a condition of semi-madness is not unbecoming [in revolutionary times] and often leads to success.' But Robespierre? Is it that Mr Johnson does not know what Robes- pierre was and did or—worse—that he does know? And listen, too, to Mr Johnson's other hero, Danton: 'We are the rabble! We spring from the gutters! We can rule only through fear! The Parisians are so many—a river of blood must flow between them and the émigrés!' Pronounce that lovingly, if you can!

'Above all,' Mr Johnson continues, 'the French movement has style, a certain elegant flourish to all that it does, which catches the heart and makes one appreciate that politics is not just a utilitarian science but also an art, whose satisfactions are aesthetic as well as moral.' How ironic that such dandyish stuff should spout from the editor of a magazine founded by the Webbs, who regarded politics precisely as a 'utilitarian science'; yet the irony fades as we recall that they themselves ended in the service of Moloch. Style and elegant flourishes—would Mr Johnson console the parents of a dead student, the widow and children of a policeman with the thought that they were assailed with elegance and style?

That politics can have satisfactions which are both legitimate and aesthetic cannot be denied: the patient harmonisation of conflicting inter- ests, for instance, the skilful furtherance against many obstacles of some great reform. Yet poli- tics as an art, unless firmly subordinated to morality, is surely the foulest of blasphemies. It may lead directly to men being treated as the mere agents or, worse, objects of perverted self- expression. Was not Hitler an artist manqué? Did not the Nazis have style?

Mr Johnson does not precisely tell us in what 'philosophical principles' all this uproar is grounded. Why is he so coy? Does he suppose that when a student fires off a ball-bearing he acts as if his action were to form the basis for a universal moral law? Alas, can we not guess that for every student who reads Kant there must be ten who read the morbid aber- rations of Faucault and a thousand who read neither; and that among their teachers, if any, are not only the grim ideologues Mr Johnson mentions (Marx, Mao, Lenin, Guevara, Castro) but also 'philosophers' who exalt violence, un- reason and even madness, and who shamelessly number de Sade among their own mentors. Mr Johnson sneers at a society which 'pursues consumption for its own sake.' One which pursued violence for its own sake might well be worse.

So sophisticated at times, Mr Johnson is oddly naive at others. 'The methods of the idealist intellectuals must be la denzo- crane de la rue,' he declares. 'The power of the bourgeois-communist or bourgeois-capi- talist state will not surrender unless directly challenged. A wild theory? Yes: but it works!'

It works! Is this news? Has street democracy not often worked, and especially in France, spreading misery and murder and doing grave and lasting damage before the forces of sanity reassert themselves? Did not Taine describe its workings in the French Revolution in words which should make even Mr Johnson pause; 'It installs in the political edifice over the heads of the delegated, regular and legal powers an anonymous, imbecile and terrific power whose decisions are absolute, whose projects are con- stantly adopted and whose intervention is san- guinary. This power is that of the mob, of a ferocious, suspicious sultan who, appointing his • viziers, keeps his hands free to direct them and his scimitar ready sharpened to cut off their heads.' And does it not often issue in some appalling tyranny—the last thing allegedly in- tended (yet even now who so dim as cannot see beneath the eccentric intellectual raiment affected by Professor Marcuse the totalitarian policeman's boots protruding? )?

Mr Johnson calls for a revolution 'which may ultimately enrich the lives of all of us.' We beg to be excused, most of us; it will not enrich our lives, and why on earth should it enrich his? Does he fancy that the violence for which he calls will, if it comes, certainly spare him and his? He should note the fate of Mme Roland: and beware!